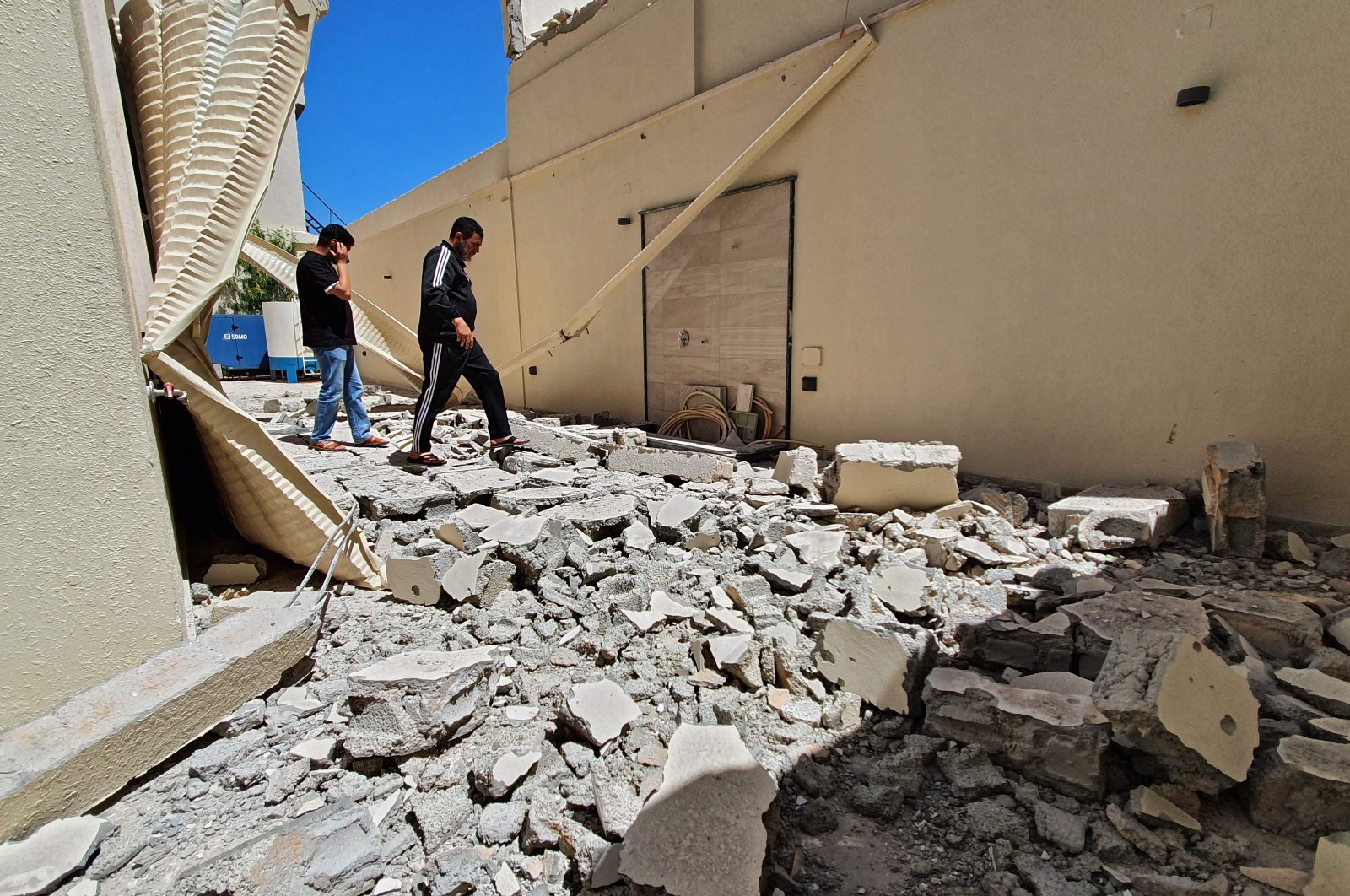 Residents walk amid the rubble of a building damaged when forces loyal to eastern-based warlord Khalifa Haftar shelled the residential neighborhood of Znatah in the Libyan capital Tripoli, held by the U.N.recognized Government of National Accord (GNA), May 1, 2020. (AFP Photo)
by DAILY SABAH WITH AGENCIES May 06, 2020 11:27 am

Libyan forces continue to fight warlord Khalifa Haftar's offensive to capture the capital Tripoli by successfully surrounding a key air base, while the putschist general continues to target residential areas and kill civilians

The Libyan army has surrounded a second key air base and carried out 24 airstrikes as part of a massive campaign, while a rocket attack by forces loyal to putschist Gen. Khalifa Haftar has killed two civilians south of the capital Tripoli as the International Criminal Court’s chief prosecutor said Haftar could be guilty of committing war crimes in the country.

Meanwhile, rockets fired by Haftar militias hit a house in the al-Hadba region, killing a couple and seriously injuring their sons, Amin al-Hashimi, undersecretary of Libya's Health Ministry, said in a statement Wednesday.

Later in the day, it was reported that the bombing by Haftar's militias in the capital Tripoli killed at least three civilians and injured 19 others.

Amin al-Hashimi, media advisor to the Health Ministry, said that the shells landed in a coastal road in Tajura region, adding that the road is the only one linking Tripoli with the surrounding areas in the east.

Libyan government forces launched a military operation early Tuesday to liberate Al-Watiya air base, which is located southwest of the capital Tripoli and controlled by militias loyal to renegade commander Khalifa Haftar, a military source had told Anadolu Agency (AA).

Al-Watiya is regarded as a key air base in the country and is second only to Mitiga International Airport. It was captured in August 2014 by Haftar, the leader of illegal armed forces in eastern Libya, who used it as his headquarters for western operations.

As part of Operation Peace Storm, air operations are being periodically carried out against the base.

The International Criminal Court's chief prosecutor warned Tuesday of potential war crimes in Libya as warlord Haftar continues his push on Tripoli despite pleas that he cease the offensive.

"It is now over a year since the offensive on Tripoli by the eastern-based militia known as the Libyan National Army headed by Gen. Khalifa Haftar started," Fatou Bensouda told the Security Council. "Of particular concern to my office are the high numbers of civilian casualties, largely reported to be resulting from airstrikes and shelling operations."

She did not specify whose airstrikes or shelling she was referring to during her remarks but cautioned that her team continues to gather information regarding "incidents that have occurred during the recent period of armed conflict that may constitute crimes."

"Intentionally directing attacks against the civilian population or against individual civilians not taking direct part in hostilities is a war crime under the Rome Statute. Likewise, the Rome Statute prohibits the intentional directing of attacks against hospitals and other buildings protected under international law, such as those dedicated to religion or education, when they are not military objectives."

Bensouda, also raised the case of Seham Sergiwa, a leading Libyan rights campaigner and member of the country's House of Representatives who went missing in Haftar-controlled territory in July.

She was abducted the night after publicly questioning Haftar's push to seize Tripoli from the Libyan government. The Avengers of Blood, a militia allied to Haftar, is suspected of involvement in her disappearance.

Bensouda said that while Sergiwa's "fate and whereabouts remain unknown," her office has information that "may point to those responsible for Ms. Sergiwa's disappearance."

"Investigations to verify this information are continuing," she said, without elaborating.

Residents of the western Libyan city of Sabha have publicly defied Haftar for the first time since the militia leader captured the capital of the Fezzan region in January 2019.

In a move that could be a turning point in the Libyan conflict, tribal leaders and revolutionaries in Sabha have announced their support of the internationally recognized Government of National Accord (GNA).

The move reflects that Haftar's "iron grip" on the city has relaxed and highlights the possibility of the collapse of his militias in the region at any moment.

Recent gains by the Libyan army in coastal cities, the village of Abugrein village and the Hadaba area have seemingly encouraged Sabha residents to publically reject Haftar's move to rule Libya.

Haftar's militias only control main cities, airports, military bases and oilfields in Fezzan, leaving behind all other towns and the region's vast desert.

The militia leader's main focal point in Fezzan is Brak al-Shati air base, 50 kilometers north of Sabha, which has been controlled since 2016 by militants loyal to late Libyan ruler Moammar Gadhafi.

There are also the Al-Jufra base, northeast of Sabha, and the Tamanhint base after the withdrawal of Misrata forces from there in 2017.

The entire region has fallen to Haftar's militias after the warlord took control of three main military bases in Fezzan despite the presence of local forces affiliated with the Libyan government and tribal forces, which have their own agenda in the region.

It took Haftar two years to move into the Fezzan region, taking advantage of clashes between Arab tribes and Toubou tribes backed by Chadian gunmen, which helped the warlord to capture most of the region as well as El-Sharara and Al-Feel oilfields in less than three months.

By controlling the Fezzan region, Haftar aimed to secure his supply lines against any attack on his backyard bases while moving on Tripoli and to show to his backers that he was in control of most of the Libyan territory.

But Haftar's move to dispatch his forces south of Tripoli has made the security situation in the Fezzan region fragile. That was evident when the Toubou tribe managed to capture the city of Murzuq, south of Sabha, and when Libyan government forces liberated the town of Ghadduwah near Sabha.

Libyan government forces were also able to control Al-Feel oilfield near the city of Awbari before Haftar used his warplanes to regain control of the field.

And although the militia leader pulled out some of his forces from the battlefield in Tripoli and his warplanes committed massacres against civilians, Haftar lost the city of Murzuq to the Toubou fighters affiliated with the Libyan government.

The head of Libya’s internationally recognized government Tuesday called for a renewal of U.N.-brokered talks to end divisions in the oil-rich country, amid escalating military clashes and increasing tensions between the main players in the capital Tripoli.

He said the road map could include amending a landmark U.N.-brokered agreement to unite the country in 2015 and appoint a new government or agree on a plan for elections in the short term.

“This call comes as state institutions are increasingly divided, and some officials in these institutions have individually made decisions that exceeded their role and their authority,” al-Sarraj said.

The U.N.-recognized Libyan government has been under attack by Haftar's forces since April 2019, with more than 1,000 killed in the violence. It launched Operation Peace Storm on March 26 to counter attacks on the capital, Tripoli.

Late last month, Haftar unilaterally declared himself the ruler of Libya, claiming that he "accepted the mandate of the Libyan people" and terming the Skhirat agreement of 2015 "a thing of the past." The agreement was signed in 2015 in Morocco, forming the GNA to manage the transition process in Libya.

Following Haftar’s unilateral declaration, Libya’s Prime Minister Fayez al-Sarraj stated that unilaterally declaring himself the ruler of Libya once again revealed that the warlord's coup project must have ended. A parliament session was organized under House of Representatives Speaker Hamouda Sayala.

Following the ouster of late ruler Gadhafi in 2011, Libya's government was founded in 2015 under a U.N.-led political deal.