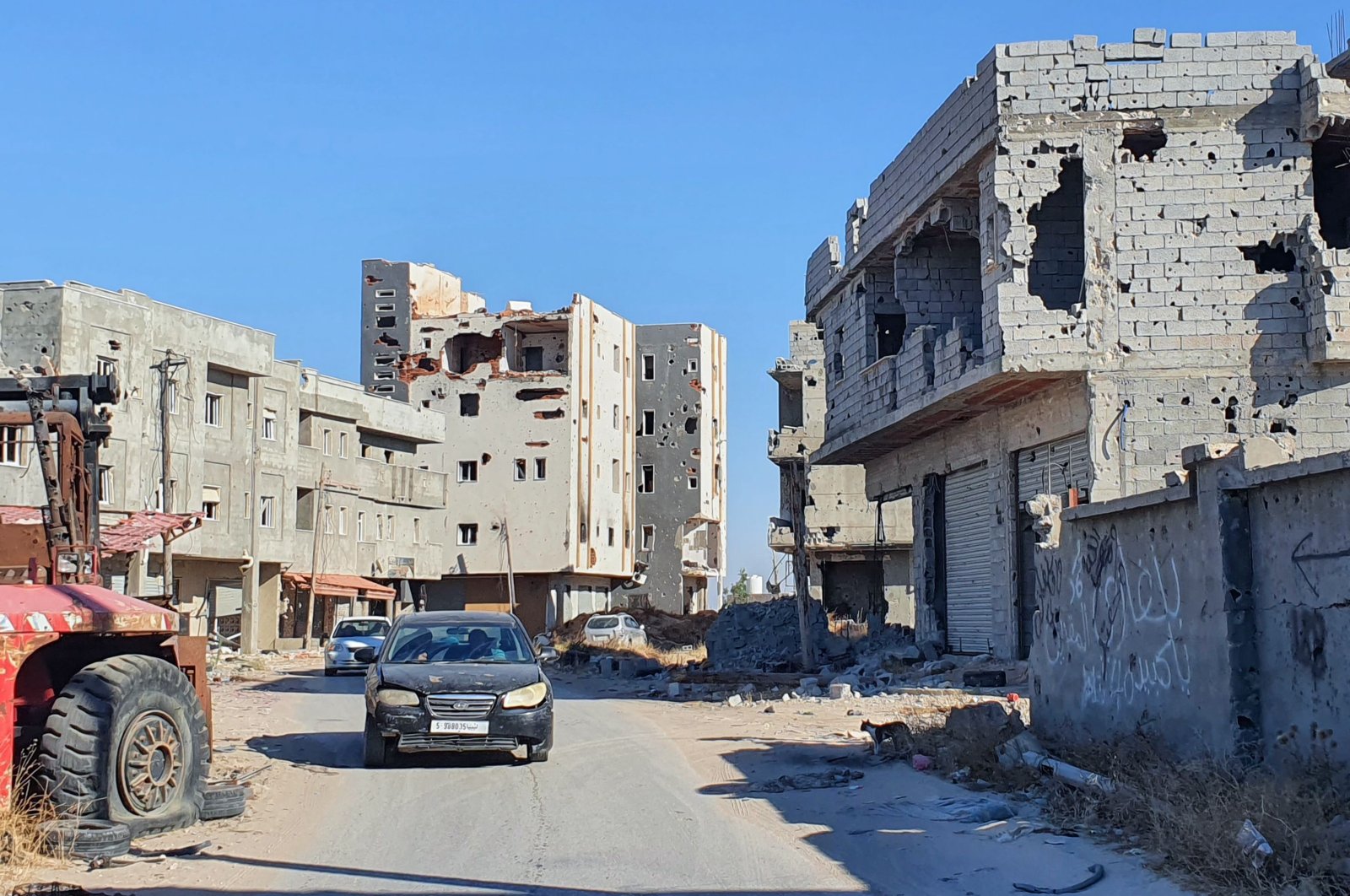 Cars advance on an empty road lined with damaged buildings in the Salaheddin district south of the Libyan capital Tripoli, on June 21, 2020. (AFP Photo)
by DAILY SABAH WITH AGENCIES Jun 25, 2020 12:13 pm
RECOMMENDED

The head of Libya's High State Council said on Wednesday that tribes in the country are not a political party and that the Afghan experience cannot serve as a solution to the Libyan crisis.

Khalid al-Mishri was commenting on Tunisian President Kais Saied's remarks, during his meeting with French President Emmanuel Macron on the Libyan situation.

The Tunisian president in his remarks called for a new constitution based on tribal experience and the constitution in Afghanistan.

Al-Mishri said the internationally recognized Government of National Accord (GNA) obtained its legitimacy based on the inter-Libyan talks that lasted for months.

"There is no need for more initiatives, all we need is to activate the political agreement to let the GNA extend its authority across Libya," al-Mishri added.

He also said that a Libyan tribal delegation that met the Tunisian president in December 2019 doesn't represent all tribes.

Al-Mishri also criticized Egypt's calls for a cease-fire and said the call "contains many faults which will complicate the situation in Libya."

Egyptian President Abdel Fattah el-Sissi warned over the weekend that any attack on Sirte, a city on the Mediterranean coast, or the inland Jufra air base by the Tripoli forces would amount to crossing a “red line.” He said Egypt could intervene militarily to protect its western border with the oil-rich country.

The Tripoli-based government said it considered el-Sissi’s comments a “declaration of war,” while authorities in the east welcomed his support.

While the tensions are high in the region, France announced Wednesday that French President Emmanuel Macron will hold a videoconference with Russian counterpart Vladimir Putin on Friday, with the crises in Libya and Syria on their agenda.

The situations in Iran and Ukraine will also be raised, as well as "cooperation in the fields of health and the environment," the French presidency said.

The virtual meeting comes after Macron hosted Putin in Paris last August, stating that he wanted to bring Russia and Europe back together and that he believed "Europe stretches from Lisbon to Vladivostok."

Macron believes there is "a need to deal with all the difficult subjects," with Russia, his office said.

France has already voiced its unease with Russia's role in Libya.

Eastern-based forces under putschist Gen. Khalifa Haftar launched an offensive in April last year to try to capture the capital, Tripoli, from the U.N.-supported government there.

Russia, along with the United Arab Emirates and Egypt, has backed Haftar. France is also suspected of supporting Haftar, despite denying these claims.

Haftar has reportedly enjoyed the support of the Wagner mercenary group allegedly run by an ally of Putin.

Meanwhile, Turkey, together with regional ally Qatar, backs the U.N.-recognized GNA in Tripoli.

After sweeping across much of the country, making their way deep into the west and fighting in the suburbs of the Libyan capital, Haftar's forces were forced to retreat from most areas they captured in their offensive. That reversal came after Tripoli-based fighters, with Turkish support, gained the upper hand in the war earlier this month.

The Tripoli forces retook the capital’s airport, the main entrance and exit points to the city and a string of key towns nearby. They also threatened to retake Sirte, the birthplace of former dictator Moammar Gadhafi who was ousted and killed in 2011. Taking Sirte could allow them to gain control of oil fields and facilities in the south that Haftar had seized earlier this year as part of his offensive on Tripoli.

Macron made two visits to Russia in 2018. During one trip he watched the World Cup final.

The French leader had also planned to attend the events in Red Square last month to commemorate the 75th anniversary of the victory over Nazi Germany.

But that event was canceled as a result of the coronavirus pandemic. It went ahead in Moscow Wednesday without foreign dignitaries attending.