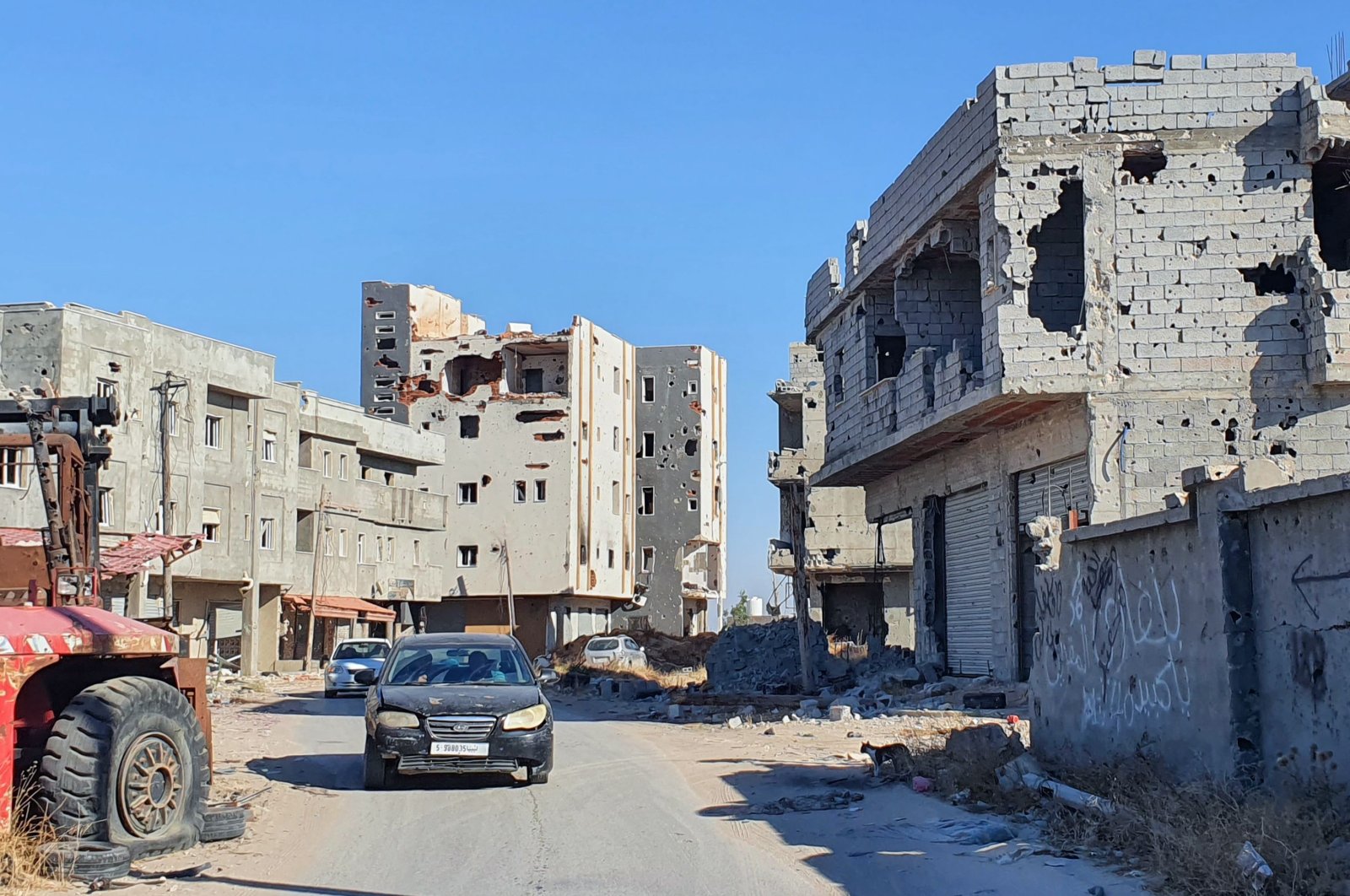 Cars advance on an empty road lined with damaged buildings in the Salaheddin district south of the Libyan capital Tripoli, as some residents return to the area after it was demined, June 21, 2020. (AFP Photo)
by DAILY SABAH WITH AA Jun 22, 2020 10:31 am
Edited By Nurbanu Tanrıkulu Kızıl
RECOMMENDED

Libyan officials continued to decry and condemn Egyptian President Abdel-Fatah el-Sissi’s provocative statements, noting that they contradict the Charter of the United Nations and treaties.

El-Sissi’s remarks on direct intervention in Libya are against U.N. treaties and Security Council resolutions, the spokesperson for Libya's Foreign Ministry said Sunday.

In a Twitter post, Mohammed al-Qablawi said that according to the U.N. charter, the use of force is prohibited among member countries.

He stressed that under the charter, member countries have the legitimate right of self-defense if they are targeted in an armed attack.

Al-Qablawi also said that according to Security Council Resolution 2441, member states can assist the Libyan government.

On Saturday, el-Sissi alluded to the possibility of sending "external military missions if required" and said that "any direct intervention in Libya has already become legitimate internationally" while in speaking in the city of Matrouh near the Libyan border.

El-Sissi told his army to "be prepared to carry out any mission here within our borders, or if necessary outside our borders."

He said the city of Sirte and Jufra air base are a "red line."

El-Sissi's radical comments follow the advance of forces aligned with the internationally recognized Government of National Accord (GNA) toward Sirte earlier this month.

Taking Sirte would open the gate for the GNA forces to advance even farther eastward and to potentially seize control of vital oil installations, terminals and oil fields that tribes allied with putschist Gen. Khalifa Haftar shut down earlier this year, cutting off Libya’s major source of income.

Libya’s permanent representative to the U.N., Taher el-Sonni, also criticized el-Sissi’s remarks, saying that his country is not a region that borders Egypt but a sovereign country that has territorial integrity.

El-Sonni said on Twitter that Egypt has been repeatedly warned not to support warlord Haftar.

Criticizing el-Sissi's statement on Sirte and Jufra air base, he said Egypt should draw its red lines in the Sinai Peninsula.

He stressed that the Cairo administration should leave Libya in peace by not intervening in the country's internal affairs.

Meanwhile, Libyan government representatives will not attend a meeting on Libya organized by the Arab League as it violates the organization's bylaws, the Foreign Ministry's spokesperson said Monday.

Mohammed Al-Qablawi said the Libyan government has reviewed the Arab League's decision taken during its extraordinary session at Cairo's request and refuses to attend.

Meanwhile, the secretariat announced that the session on Libya, which was scheduled for Monday, has been postponed until Tuesday to complete technical preparations and to ensure the participation of the delegations.

The Foreign Ministry also previously said that Libya would not send a delegation to the meeting on the grounds that there was no consultation with the Libyan government.

The Secretariat General of the Arab League announced last Friday that Egypt had requested an extraordinary meeting to discuss the latest developments in Libya.

Earlier this month, Egypt called for a cease-fire in Libya as part of an initiative that also proposed an elected leadership council for the country.

Libya has been in turmoil since 2011 when a civil war toppled long-time dictator Moammar Gadhafi, who was later killed. The country has since split between the GNA in Tripoli and Haftar's forces in the east.

Haftar launched an offensive to try to take Tripoli on April 4 last year. The chaos has steadily worsened as foreign backers have increasingly intervened, despite pledges to the contrary at a high-profile peace summit in Berlin earlier this year.

The government launched Operation Peace Storm against Haftar in March to counter attacks on the capital and recently regained strategic locations including Tarhuna, his final stronghold in western Libya.

The Libyan government has condemned the military support by Egypt, the United Arab Emirates, France and Russia for attacks by Haftar's militias on Tripoli.