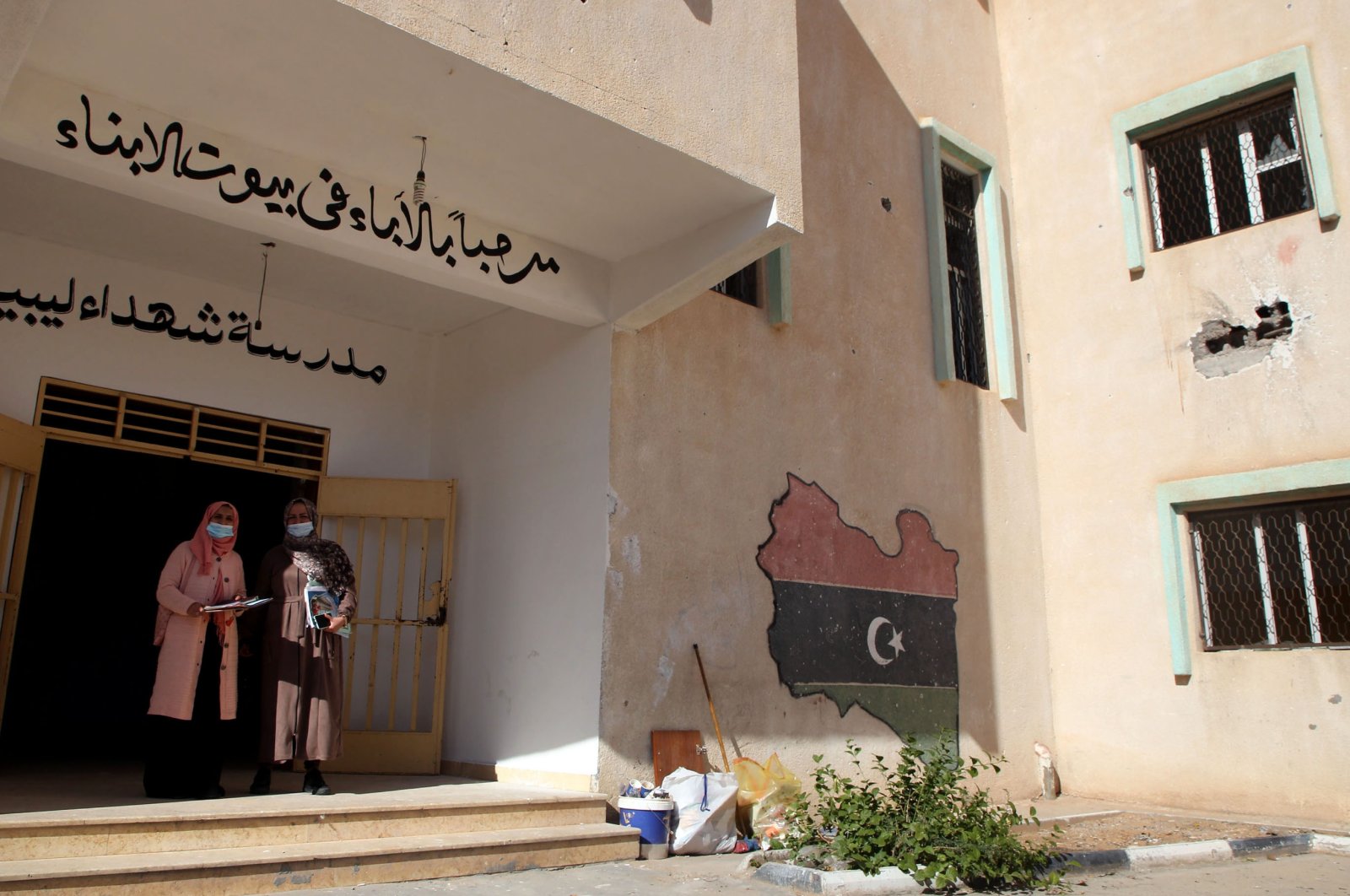 Libyan volunteers take part in an operation championed by parents and teachers to renovate the Martyrs' School, which was damaged during fighting between rival factions, in the capital Tripoli's suburb of Ain Zara, Libya, Nov. 19, 2020. (AFP Photo)
by agencies
Nov 27, 2020 2:37 pm

At the Martyrs' School near Tripoli, teachers and parents are using the limited means at hand to repair buildings devastated after putschist Gen. Khalifa Haftar’s yearlong battle to gain control over the Libyan capital.

Some of the walls have been repainted, furniture has been installed and aging computer screens dusted off. But the roofs and other walls that are pockmarked by gunfire and mortar blasts remain grim reminders of the recent fighting.

"We didn't want to sit and wait for help," said Najah al-Kabir, a teaching coordinator in a patterned djellaba and a headscarf.

She is taking part in a refurbishment campaign launched by staff and joined by enthusiastic parents of students from the surrounding Ain Zara district.

"We're one family," Kabir said, standing in the playground of the primary school, damaged by weeks of artillery fire.

"This school was our second home," she said.

When putschist Gen. Khalifa Haftar launched an offensive in April 2019 to seize the capital from the United Nations-recognized Government of National Accord (GNA), Ain Zara found itself on the front line.

The fighting deteriorated into a long battle of attrition on the outskirts of Tripoli and lasted until June this year when pro-GNA forces ended the stalemate by pushing Haftar's forces back eastward.

By the time the fighting ended, the school had been reduced to "ruins," Kabir said.

"It needed to be rebuilt quickly," she added.

UNICEF warned earlier this year that "attacks against schools and the threat of violence have led to (school) closures and left almost 200,000 children out of the classroom."

According to UNICEF, as of June 21, schools were being used as shelters for displaced persons in and around Tripoli, while the violence had led to the suspension of school for 122,088 children.

The Martyrs' School is one of around 100 schools fully or partially destroyed during the offensive by Haftar, backed by Russia and the United Arab Emirates (UAE).

Pro-GNA armed groups, whose counter-offensive was spurred by Turkey, used some schools to stock arms or as observation posts.

By the end of the fighting, the Martyrs' School was "in a terrible state," said headteacher Saleh al-Badri.

The establishment caters to 1,500 students in an area 3 kilometers (1.9 miles) from the next school, making it "important to reopen it as soon as possible," he said.

Mahmoud Abdelkhalek, who lives nearby and sends his three sons to the school, was keen to get involved.

"It seemed important that everyone gets involved to fix it," he said. "A collective effort has brought it back to life."

The effort to reopen is well underway, with some teachers and parents donating money, while others have helped with DIY skills.

But "the money has run out and we're waiting for more funds," al-Badri said.

Pupils had been set to return in early December, but with efforts also slowed by the coronavirus pandemic, hopes are now pinned on January.

If the funds are found, that will give volunteers time to fix the electrics and renovate the classrooms, as well as plastering over the remaining bullet-holes and the scars left by rockets and mortar fire.

But teaching coordinator Kabir says there is more damage to be addressed: The psychological impact the fighting has had on pupils.

"Most of them have suffered the horrors of war and displacement," she said.

Several children were killed and others were injured in Haftar’s attacks targeting school compounds in the capital Tripoli.

Earlier in November, rival Libyan military officers agreed on a road map to implement a cease-fire reached in September and are expected to meet in Sirte soon, U.N. acting envoy to Libya Stephanie Williams said.

Williams headed the political dialogue forum’s online meeting a week after the first round of the talks in Tunisia failed to name an executive authority.

The 75-member forum reached an agreement to hold presidential and parliamentary elections on Dec. 24, 2021, as a result of the talks in Tunis. They also agreed to name a volunteer legal committee to work on the “constitutional basis for the election.”