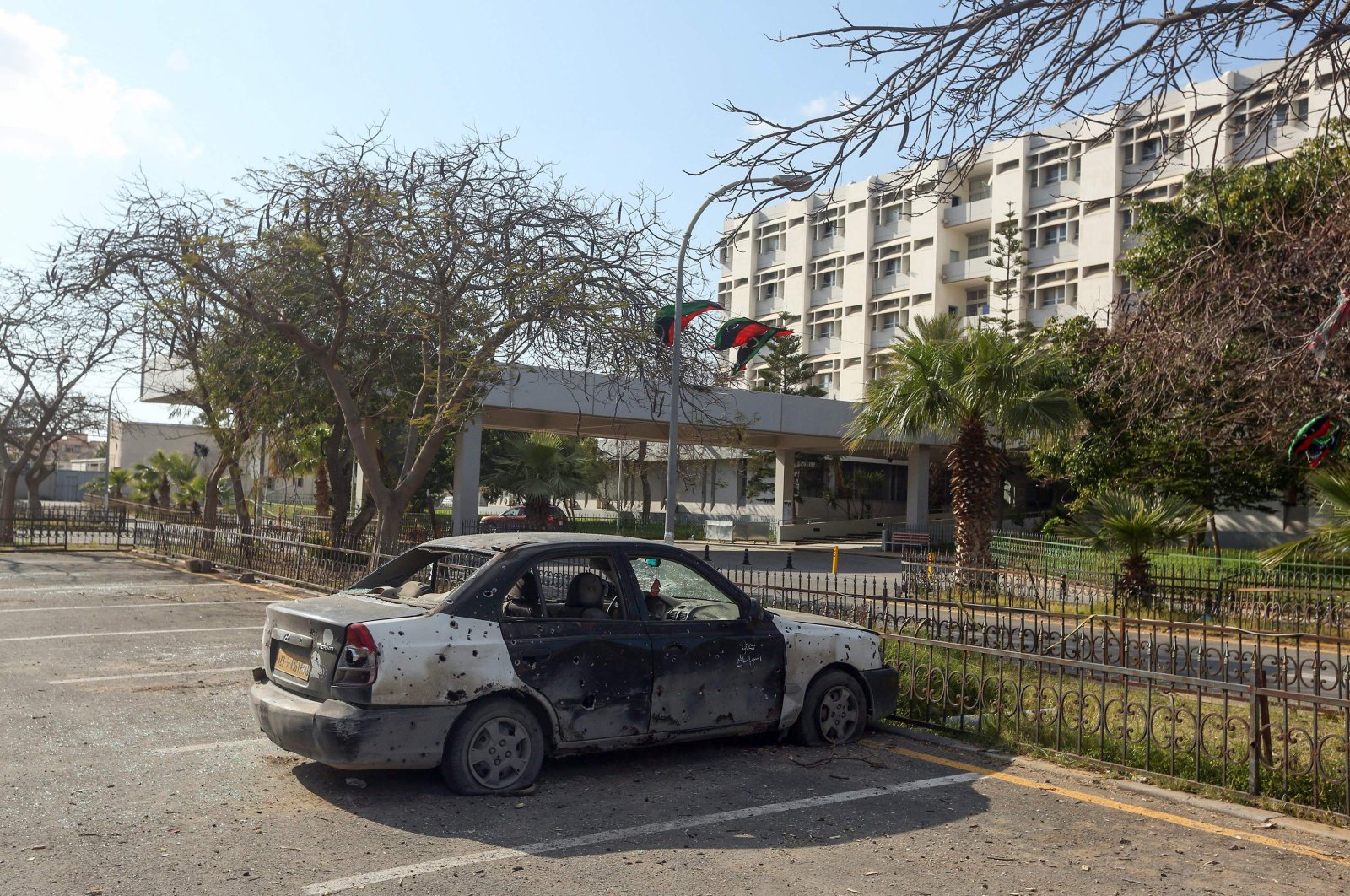 A burnt-out car is seen at the parking lot of Khadra General Hospital, which is dedicated to treating people infected with the coronavirus, after it was targeted by forces loyal to Khalifa Haftar, in the Libyan capital Tripoli, April 8, 2020. (AFP Photo)
by Daily Sabah with AFP Apr 09, 2020 10:49 am
Edited By Dilara Aslan

Despite constant warnings by the U.N. and the EU to stop attacks on the capital Tripoli, forces loyal to putschist Gen. Haftar are set to continue their offensive more than one year after the violence began in Libya

Forces of Libya's U.N.-recognized Government of National Accord (GNA) carried out an operation on a convoy of militias affiliated with putschist Gen. Khalifa Haftar on Thursday after the latter attacked the capital’s medical facilities for consecutive days, a move heavily criticized by both the European Union and the United Nations.

The GNA's air force targeted the convoy, which included two armored vehicles belonging to the United Arab Emirates, after monitoring their movements on the road between the towns of Tarhuna and Bani Walid south of Tripoli, the GNA-led Burkan al-Ghadab Operation (Volcano of Rage) said on social media.

The attacks on vital medical facilities needed to fight the coronavirus pandemic by forces loyal Haftar continued for days. A barrage of Grad rockets on Monday and Tuesday hit Tripoli’s Al-Khadra Hospital, where over 300 patients were being treated, including two for COVID-19 and many for shrapnel wounds and burns from bombs. A medical worker was wounded and many patients were forced to be evacuated in the incident. Three civilians were also wounded as shells crashed into cars and houses in the surrounding neighborhood of Abu Salim.

In recent weeks eastern-based forces under the command of Haftar have escalated their yearlong siege on the capital, despite appeals for a cease-fire so authorities can focus their resources on the pandemic. Their attack on Al-Khadra was the third such strike on a Tripoli medical facility over the past month. The 400-bed Al-Khadra hospital was one of the potential COVID-19-assigned health facilities.

Stephane Dujarric, spokesman for the U.N. secretary-general, on Wednesday strongly condemned the heavy shelling, for the second consecutive day, of Al-Khadra General Hospital in Tripoli. He also condemned the continued attacks on medical personnel, hospitals and medical facilities, particularly at a time when they are critical to prevent the spread of the COVID-19 pandemic.

Dujarric reminded all parties that medical personnel, hospitals and medical facilities are protected under international humanitarian law and that attacks on them may constitute war crimes.

“The Secretary-General reiterates his call for a global cease-fire and a humanitarian pause in Libya in order to save lives and enable the Libyan authorities and their partners to devote all their energies to stopping the spread of COVID-19,” Dujarric added.

The EU on Wednesday similarly underlined that the attacks on Libya's medical facilities in the capital Tripoli were unacceptable and that they must stop.

"The shelling of medical facilities in Libya such as Tripoli's Al-Khadra General Hospital on Tuesday, causing injuries and damages to the functionality of this medical facility, including its maternity and intensive care units, is unacceptable and must stop," said the EU in a written statement.

"This attack is even more deplorable at a moment when Libya is facing the difficult circumstances around the coronavirus crisis and should be united in containing the outbreak," it added.

The statement concluded that the EU would continue to support the U.N.-brokered efforts to implement the Berlin agreement, and help Libya return to stability and peace.

Former Algerian Foreign Minister Ramtane Lamamra seemed to be all but confirmed in early March. But the U.S. increasingly posed "questions" about his candidacy, even though "everyone else" supported him, a diplomat said.

Wednesday, during a closed-door meeting on Libya, a U.N. official told the Security Council that Guterres had launched a search for a new candidate, another source said.

Guterres "is working hard to make a proposal," the source said on condition of anonymity. Among the reasons proposed by some diplomats as to why Lamamra was rejected was the pressure on Washington from Egypt and the UAE, who back strongman Haftar and considered Lamamra to be too close to the GNA.

A fourth source suggested that Washington could have considered Lamamra too close to Russia, which is accused of sending mercenaries to support Haftar, an accusation that Moscow denies.

The U.N.'s previous envoy to Libya, Ghassan Salame, quit in early March following the repeated failure of efforts to restore order, although he said his resignation was for health reasons. He had served in the role since June 2017.

Since the ouster of late ruler Moammar Gadhafi in 2011, two seats of power have emerged in Libya: Haftar in eastern Libya, supported by Egypt, Russia and the UAE, and the GNA in Tripoli, which enjoys U.N. and international recognition.

International efforts to reach a cease-fire have been stymied by Haftar's side flouting the process. The Berlin conference in January called for a truce in Libya to further diplomatic talks led by the U.N., however, no results came out of the talks while Haftar forces continued their attacks on the capital just days after the announced cease-fire.