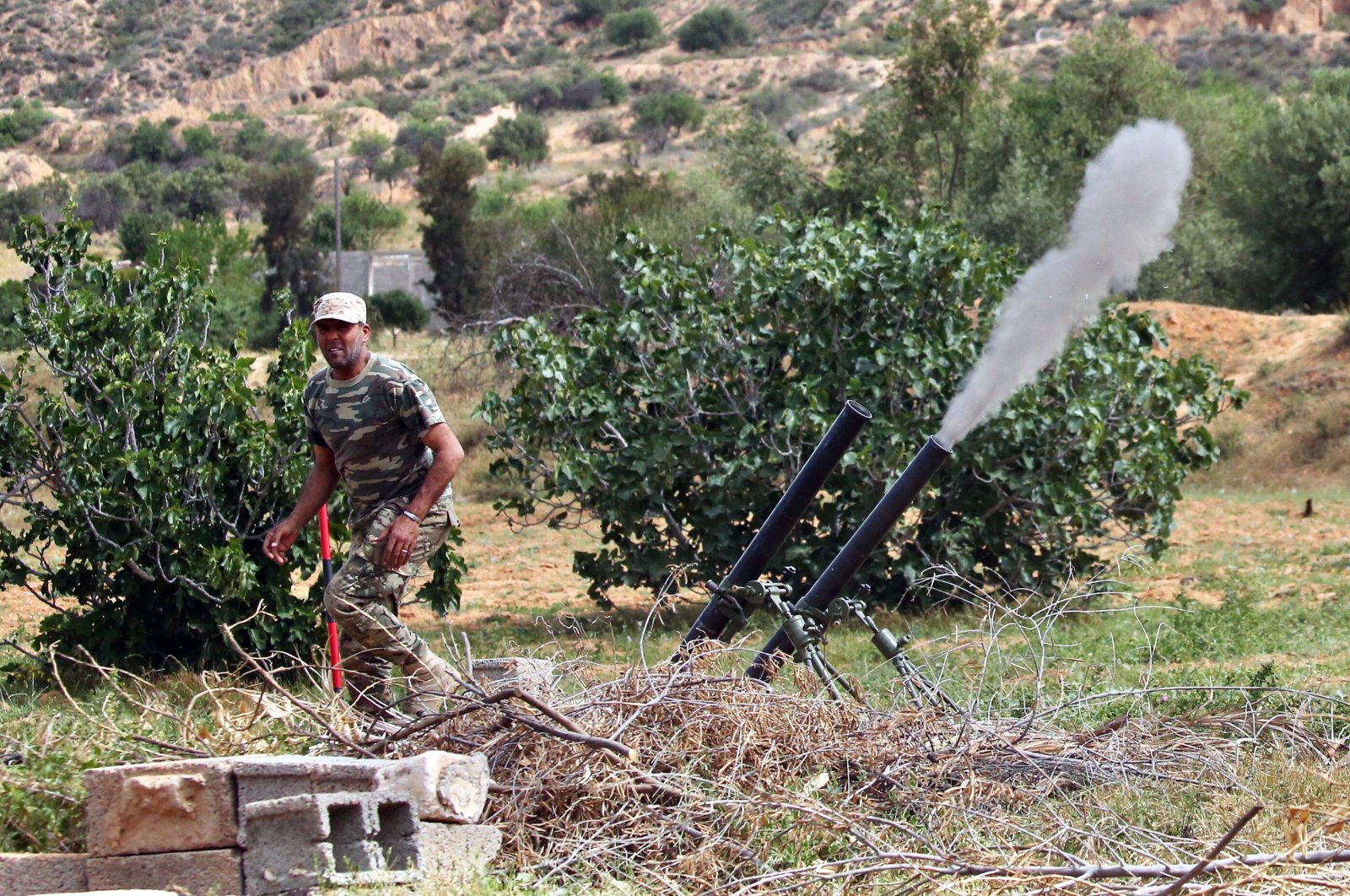 On Saturday, GNA forces launched an operation to recapture Tarhuna, a town of strategic value for Haftar and his last major stronghold in the area surrounding Tripoli.
by DAILY SABAH WITH AGENCIES Apr 21, 2020 11:32 am

Conflict in Libya escalates as UN-backed GNA advances against Haftar militia in Tarhuna, while civilians continue suffering as hospitals targeted

Libya's U.N.-recognized Government of National Accord (GNA) said Monday it carried out three airstrikes on militias loyal to the putschist Gen. Khalifa Haftar, southeast of the capital Tripoli.

Following the airstrikes in Tarhuna, a city 80 kilometers (50 miles) southeast of Tripoli, Mustafa al-Majei, spokesman for the GNA-led Operation Volcano of Rage, told Anadolu Agency (AA) that there is a cautious calm in areas south of Tripoli.

Al-Majei confirmed that government personnel was holding their positions in the areas around Tarhuna.

On Saturday, GNA forces launched an operation to recapture Tarhuna, a town of strategic value for Haftar and his last major stronghold in the area surrounding Tripoli.

Tarhuna is a major focal point for Haftar's militias in their onslaught against Tripoli, as well as for their supply lines from the al-Jufra Airbase.

On Sunday, the GNA announced that it launched 17 airstrikes on Haftar forces and their military vehicles to recapture Tarhuna.

Tarhuna comes to the forefront as one of the gathering and supply points for Haftar forces. The province consists of 65 big families that have major influence over the country. One of them is the Tarhuna family, sharing the same name with the province itself, which works with the Haftar forces. The family took the Tripoli International Airport under control back in 2017 and allowed Haftar forces to be deployed.

The attacks in the province have escalated further since January 2020 and have cost the lives of hundreds of civilians.

The GNA has been preventing Haftar forces from providing further supplies to Tarhuna over the last three weeks. According to experts, the Tarhuna family poses the "biggest danger" to the GNA since the forces loyal to the family do not hesitate to launch missile attacks whenever the U.N.-recognized government takes a strategic military step for the sake of the country.

The GNA signaled the operation 10 days ago when the electricity and communication channels to the province were cut. On Saturday, the operation officially launched with a plan to encircle Tarhuna from seven points in the province's north, east, west and southwest, forming a crescent shape. Southern Tarhuna is expected to be left open as a route for Haftar forces to escape to the town of Beni Waled.

The seven fronts being used for the GNA to conduct its operation are named Zatarna, Qarabolli, Maslatta, Garyan, Tawisha, Mashrou and Salahaddin.

The GNA has already advanced in the Qarabolli, Garyan and Tawisha fronts.

Last week marked a huge success for the GNA as it cleared 3,000 square kilometers of land occupied by Haftar's militants following operations in western Libya.

It also reported last week that its forces conducted airstrikes on militants loyal to Haftar.

Meanwhile, five medical personnel were injured during Haftar militia attacks on two field hospitals in southern Tripoli on Monday. According to a press release made by Operation Volcano of Rage's Facebook page, Haftar forces attacked two hospitals in the Wadi al-Rabi district via grad missiles.

The U.N. Support Mission in Libya reported on Monday that 23 attacks had been carried out on health facilities in the war-torn country over the last year, with nine in the last four months alone.

"One attack on health is too many. Royal private hospital in Ain Zara, Trek al Shok shelled, yesterday. Some 23 health facilities shelled in #Libya since April 2019, killing 80 people and injuring 61," said the U.N. Support Mission in Libya on Twitter.

Since the ousting of late dictator Moammar Gaddafi in 2011, two seats of power have emerged in Libya: Haftar in eastern Libya, supported by Egypt and the United Arab Emirates (UAE), and the GNA in Tripoli, which enjoys U.N. and international recognition.

"Haftar's latest assault on Tripoli shows that his goal is to impose military rule over the rest of the country, as he has done in the east," Polat said in an article he wrote for the AA.

Polat stated that the capture of coastal cities as well as advancing on Tarhouna is seen as a significant blow to Haftar and his backers, a year after he launched an offensive on the capital.

"The latest territorial loss has further hampered militia leader Haftar's chances of taking Tripoli. Haftar seems to be more adept at propaganda than war per se. His perception management machine is accustomed to making unsubstantiated announcements of imaginary military advances and victories," he added.

Regarding the plague's spread in the war-torn country, Polat pointed at the worsened conditions over the years that enable the virus to spread easily.

"Years of war have created conditions that accelerate the spread of the virus, and the Haftar forces pushing to capture Tripoli appear to be exploiting the pandemic to inflict the utmost casualties on civilians by shelling areas where people are trapped at home under the curfew, as the coronavirus is threatening an already shattered health system," he expressed.

"Civilians in Libya are suffering deeply from a war, with large-scale electricity, water, and gas cuts, and there is limited funding in the government treasury for the oil-rich Libya to pay for imports, such as medical supplies, which will surely make it harder to battle the coronavirus," Polat continued.

Libya has reported one death from the virus, 35 cases, and nine recoveries. It recorded its first case of the coronavirus on March 24.