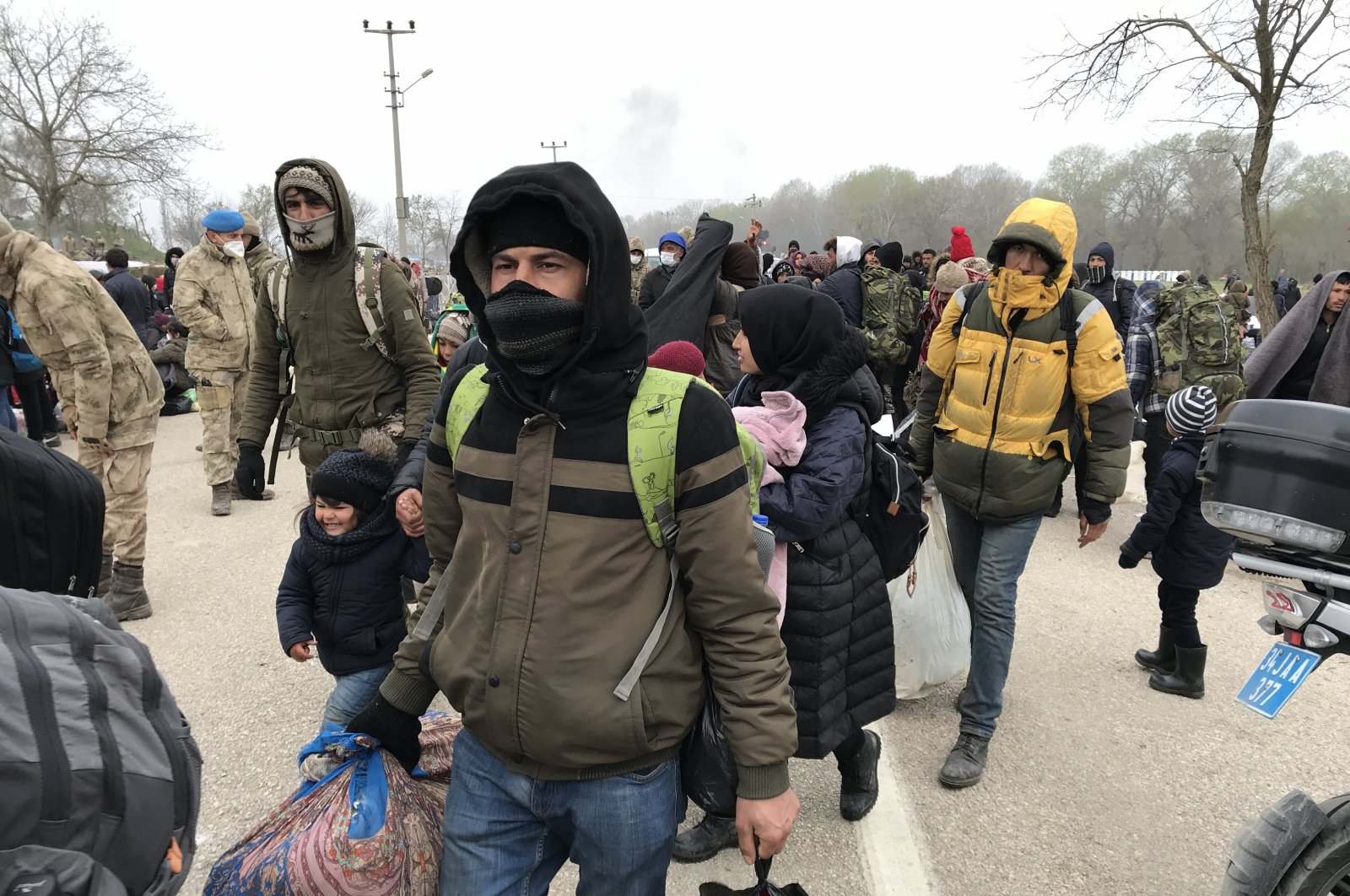 After a month of waiting on the Greek border in hope of settling down for a better life in Europe, the spread of the coronavirus has forced thousands to shelve their dreams once again

After waiting in vain for around a month camped out on the border to the EU, migrants and refugees on Friday requested to abandon the area and return to the provincial migration authorities in Turkey's northwestern Edirne, as Greece looks nowhere close to allowing their entry.

While responding to the requests, Turkish officials have informed other migrants and refugees about the risks posed by the spread of the coronavirus if they continue to remain outdoors. Those convinced by officials have since joined the ranks of those expressing a willingness to leave the area. The returnees have since been transported to available guesthouses via buses sent by the Edirne governor's office.

As part of COVID-19 measures, the migrants and refugees will then be sent to appropriate locations once the quarantine period is over.

After first appearing in Wuhan, China, last December, the coronavirus has spread to at least 176 countries and regions, according to data compiled by the U.S.-based Johns Hopkins University.

The number of confirmed coronavirus cases worldwide has now surpassed 537,000, while the death toll is above 24,000 and over 123,000 have recovered, according to data compiled by U.S.-based Johns Hopkins University.

Despite the rising number of cases, most people who contract the virus suffer only mild symptoms before making a recovery.

Some 150,600 migrants and refugees have succeeded in entering Greece by land or sea since Feb. 28 when Turkey announced that it would not prevent migrants from trying to cross over the land border to Europe any longer, Interior Minister Süleyman Soylu said on Thursday.

He also reported that nearly 4,600 migrants were still waiting near the Pazarkule border gate in Turkey’s western province Edirne.

It has been almost a month since migrants and refugees moved toward the Greek border to enter the European Union but were blocked by Greek security forces, who used tear gas, bullets and water cannons against those trying to cross. Despite an onslaught of attacks and rough measures by Greek police and border authorities, migrants and refugees have continued to wait amid bleak conditions on the border for 28 days in the hope that Greece will open the doors to asylum in the EU.

The latest humanitarian crisis in Idlib, caused by Assad's attacks on civilian-populated areas, has forced nearly a million people to move near the Turkish border for refuge. The renewed attacks risked another wave of migration to Turkey, which already hosts 3.7 million Syrian refugees and says it cannot take in any more.

Meanwhile, the mayor of the Turkish border province Edirne expressed his gratefulness on Friday to the personnel and humanitarian agencies that have been working to assist the migrants on the Greek border.

Highlighting the efforts of the Turkish side on taking care of the migrants, Ekrem Canalp said that all central government and Edirne municipal staff, as well as the crews of Turkish Red Crescent and the Disaster and Emergency Management Presidency (AFAD) were working tirelessly throughout the region.

After those hoping to cross into Europe left the border, the municipality cleared the area that had hosted the migrants for a month. During the process, three migrants have been killed, while 240 others injured by the Greek border guard's violent actions. Likewise, gasses deployed from the Greek side to deter the migrants had a negative impact on thousands waiting near the border.

In the meantime, hundreds of Turkish personnel from the fields of security, health, cleaning and coordination worked 24/7 for migrants to stay safe in the region.

In the mobile hospitals located on the border, approximately 10,000 migrants have been treated. Some 985,000 humanitarian items, including blankets, coats, shoes, hygiene products, diapers and food, have been distributed to the migrants over the course of the process.

Migrants and refugees in need of medical attention are being hosted at hospitals in Edirne city center, while extra staff has been charged with making special arrangements for families with infants. The families have been separated from other migrants and have their meals brought to them rather than having to line up.