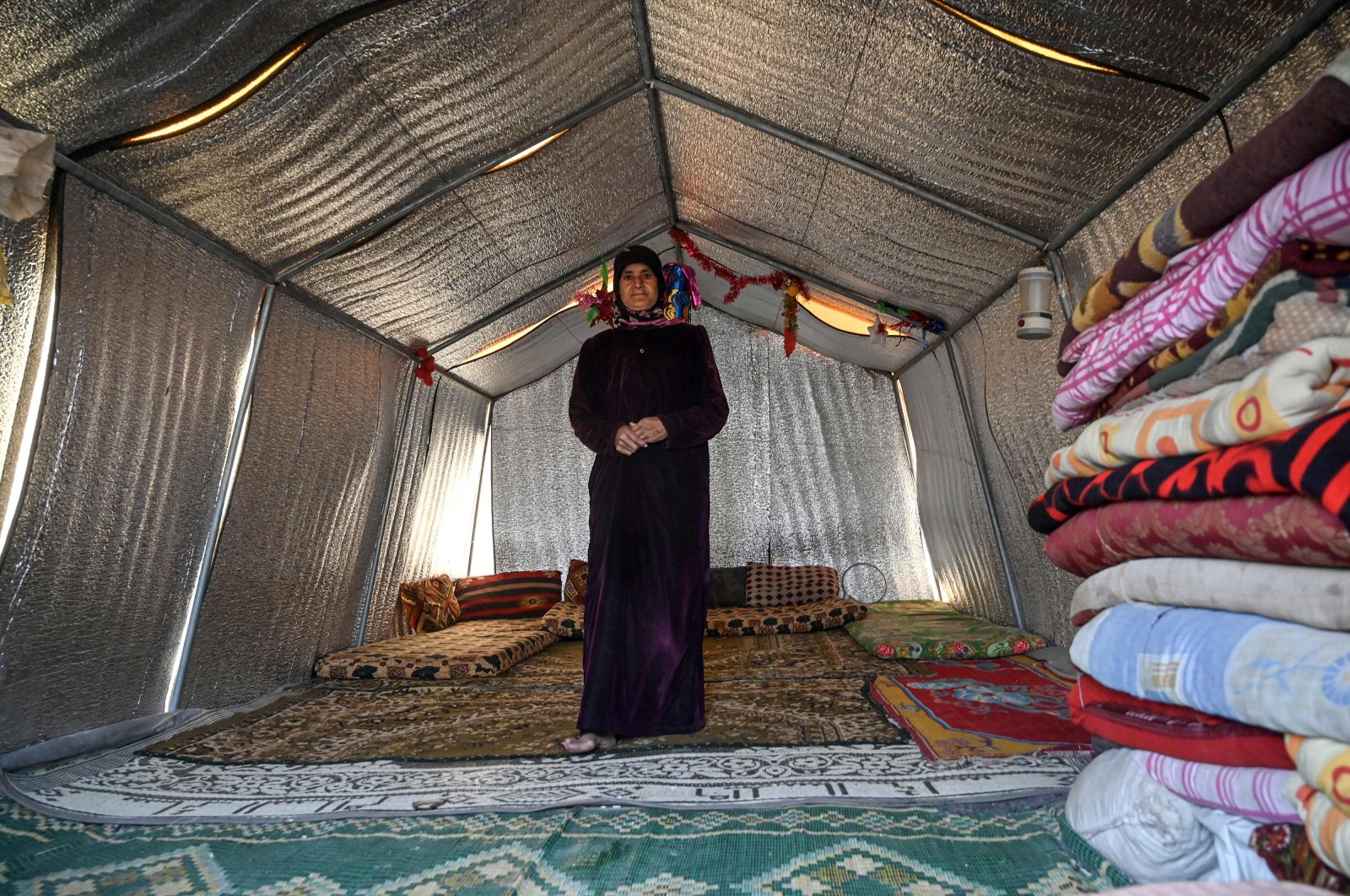 Noora al-Ali, ais pictured in her new concrete home at a camp created by Turkey's Humanitarian Relief Foundation (IHH) near Kafr Lusin on the border with Turkey in Syria's northwestern province of Idlib, March 10, 2020. (AFP)
by French Press Agency - AFP Mar 13, 2020 11:41 am
RECOMMENDED

Hamad al-Abdallah has installed wifi and insulation in his new concrete room, trying to make the most of the desperate conditions his family has endured since fleeing the Syrian regime bombardments.

Al-Abdallah's family was among the lucky ones to move into the new, 24-square-meter concrete homes provided by a Turkish charity last month after almost a year living in a tent in the huge, squalid camps along Syria's northern border with Turkey.

Abdallah fled with his wife and four children when the forces of the Bashar Assad regime, backed by Russia and Iran, began their assault on the last opposition holdout of Idlib.

"It's big enough, and we feel comfortable," he said, welcoming Agence France-Presse (AFP) into his humble, new, two-bedroom house.

"If one day we can go home, we will. But so long as the Syrian army does not pull back, we can't because most of us are wanted by the regime. With young children, we can't try to get into Turkey either, so we will stay here," he added.

Turkey, which already hosts more than 3.6 million Syrians, has refused to let any more enter, but its NGOs are busy building an enormous stretch of new housing inside Syrian territory to deal with the latest wave of displacement, now numbering close to a million people in Idlib.

Despite a cease-fire agreed on March 6 between Turkey and Russia, few believe the Syrian regime will back off its plans to eventually retake the province, leaving few options for the displaced.

The camps stretch out as far as the eye can see, thousands upon thousands of tents on either side of the road linking Turkey to the city of Idlib, but now with a smattering of new concrete-block houses built by Turkish NGOs.

'Exhausted from living in tents'

Along the dirt tracks of the camp in the area of Kafr Lusin, children play while groups of women chat around washing lines, and a flock of sheep nose around the rubbish piles.

Many tents have their own solar panels to charge batteries and provide light.

Some occupants have managed to make a small living here. There is a hairdresser, grocery, even a dress shop, while some blocks serve as makeshift classrooms.

There are public toilets, though the smell from open sewers remains overpowering.

Ankara encouraged the construction of more permanent structures as a way to stop refugees from trying to breach the border.

According to the Humanitarian Relief Foundation (İHH), the main Turkish NGO working here, the new concrete homes are reserved for families of six or more who earned less than $150.

Spokesman Selim Tosun said the charity is aiming to build 15,000 homes, and had so far completed 1,000.

"People are exhausted from life in the tents. These new houses can at least protect them from the winter cold and the summer heat," he said, adding that 100,000 would eventually be needed to completely replace the tents.

Each new home costs $360 to build, Tosun said, with the money coming entirely from private donors in Turkey.

With nowhere to run, they at least offer displaced families hope of a modest improvement in daily life after months and years of horror.

Suleiman Mousa hopes to move into one of the concrete houses in a few days, after two and a half years living in a pair of tents, shared between his two wives and 10 children.

Despite the difficult life, the camp has at least given his family some sense of safety.

"As long as we are safe here, without bombings and fighter jets flying over us, it's better to stay here than try to reach Turkey," he said.

Noora al-Ali, an elderly woman who fled the town of Maaret al-Numan with her son and eight grandchildren.

"A rocket blew up near me and my nephew was killed," she recalled. "I thought I would die too. I left everything."