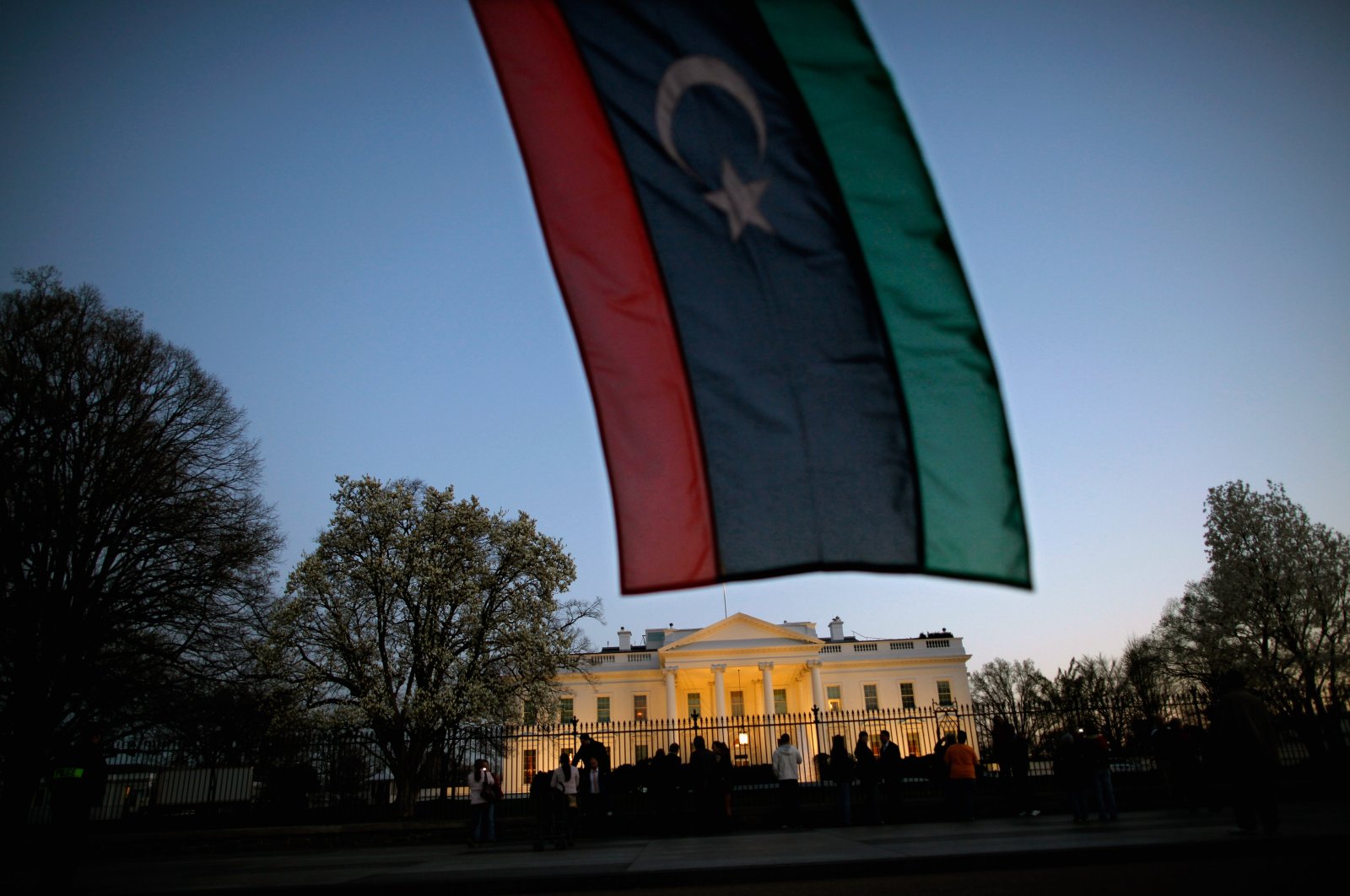 A Libyan holds up a Libyan flag while standing in front of the White House as then-President Barack Obama comments on U.S. involvement in Libya, Washington, D.C., March 28, 2011. (Getty Images)
by Dilara Aslan Jan 04, 2021 1:49 pm

The U.S. under a new administration might pursue a tougher stance on foreign powers intervening in the Libyan civil war, while coordination with Turkey, a major stakeholder with a welcomed presence in Tripoli, remains possible

The U.S. policies on Libya have remained blurry, especially in the aftermath of the toppling of longtime Libyan dictator Moammar Gadhafi and have gone through clear periodic transitions. With a new U.S. administration scheduled to assume office on Jan. 20, experts foresee a more coherent policy toward the war-ravaged North African country. They underline that cooperation between Washington and Ankara is a must, and would benefit the country's transition to normalcy and peace.

"I believe the U.S. policy toward Libya under the Biden administration will be revised and adjusted to take a tougher stance on Russian interference and the military presence inside Libya, where Moscow has been using the Wagner (Group) mercenaries fighting alongside Haftar," said Guma el-Gamaty, a Libyan academic and politician, in an interview with Daily Sabah.

El-Gamaty, who heads the Taghyeer Party in Libya and is a member of the U.N.-backed Libyan political dialogue process, said outgoing U.S. President Donald Donald Trump did not take a tough stance on Russia because he viewed China as the main threat and was also "indifferent on the detrimental interference by the UAE (United Arab Emirates) and Egypt backing Haftar and fueling the conflict in Libya."

"Trump considered economic relations and large business contracts with the UAE as more important," he noted.

The UAE is one of several countries, along with Egypt, France and Russia, that have supported putschist Gen. Khalifa Haftar against Libya's legitimate government.

The UAE has invested heavily in support for Haftar and has been harshly criticized by human rights groups and the U.N. for escalating violence in the war-torn country.

The Human Rights Watch (HRW) in late April said an airstrike by the UAE on a factory south of Tripoli on Nov. 18, 2019, killed eight civilians and injured 27 others while a confidential U.N. report in March revealed that two Dubai-based companies have been sending Western mercenaries to support Haftar in his offensive.

Still, the UAE has escaped criticism by the U.S. or European countries for its breaches of human rights and arms embargoes.

Describing U.S. foreign policy on the Middle East and North Africa as "catastrophic," Abdennour Toumi, an expert on North Africa at the Ankara-based Center for Strategic Studies in the Middle East (ORSAM), told Daily Sabah that the outgoing administration's policies were reckless, "putting lives at risk and destabilizing even the U.S.' so-called allies in the region."

"I believe the U.S. attitude will change a great deal because President-elect Joe Biden wants to appear as a serious superpower broker in the MENA (the Middle East and North Africa) region and would show some teeth toward Haftar's supporters, who are not really good friends with the coming American administration," Toumi said.

"The only U.S. policy on Libya which Trump fully endorsed is military cooperation between the U.S. and the GNA (Government of National Accord) on fighting terrorism, which was implemented well in the campaign to liberate Sirte from Daesh in 2017," el-Gamaty said, adding that Biden, on the other hand, is expected to take a tougher line on the military presence of Russia and the UAE in the country.

He added that the Biden administration would also give more support for the political efforts headed by the U.N. Support Mission in Libya (UNSMIL) to achieve a final political solution to end the chaos in the country. "Biden may well exert pressure on Egypt and UAE to go along with a political solution in Libya and not a military one."

Toumi, on the other hand, also pointed to the fact that U.S. policy on Libya and the region as a whole, has undergone periodic transitions, with the U.S. looking at the Maghreb "as a friendly spot for U.S. interests in the '70s and '80s." While a decade later in 1986, then-U.S. President Ronald Reagan ordered an aerial campaign on Tripoli, Benghazi and the home of Gadhafi after Libya was blamed for the bombing of a West Berlin disco used by U.S. servicemen that killed three people and injured more than 200. He said the U.S. distanced itself from Libya thereafter until U.S. policy became more assertive once again when Washington's Ambassador to Libya Christopher Stevens was killed when terrorists attacked the U.S. Consulate and a refugee safe house in Benghazi.

"This tragic incident changed President Obama's Libya policy, a policy that was very timid from the beginning to that date," Toumi stated. "The region became a vital imperative in the U.S.' war on terror."

"America is back," Biden said, as he announced key members of his foreign policy team in November. The Trump administration had withdrawn or threatened to withdraw from multilateral commitments during its time in office, including the Paris climate accord, the Iran nuclear deal, namely the Joint Comprehensive Plan of Action, the Intermediate-Range Nuclear Forces Treaty, UNESCO and the World Health Organization (WHO). The administration also reduced engagement on global issues such as the Syrian civil war, Libya and Ukraine. Biden, however, has vowed to renew America's global leadership.

On the other hand, Tim Eaton, a Libya expert at Chatham House, wrote last month in a comment that the U.S.' Libya policy would not experience significant changes with a new administration.

"Although the contrast between the Obama and Trump administrations is stark, the contrast between their respective policies towards Libya is much less so. Libya was not, and has not become a priority. The U.S. has not committed significant resources to bridge widening differences among the international community over Libya," he stated.

Haftar, a former Libyan Army officer, returned to Libya in 2011, after spending years in exile in the United States, due to having participated in a failed CIA-backed coup against Gadhafi and has been the self-styled Libyan National Army's (LNA) commander since 2014. The general's forces are aligned with an administration based in Libya's eastern city of Tobruk that has not been internationally recognized.

Washington's policy toward Libya was rather inconsistent with the U.S. officially supporting the peace process in the war-torn country while continuing contact with a warlord.

"Trump went to the extent of calling Haftar at the start of his war on Tripoli in April 2019 which was interpreted as giving him implicit support to take Tripoli and power by force," el-Gamaty said.

The White House said on April 19, 2019, that Trump spoke by phone earlier in the week and discussed "ongoing counterterrorism efforts" with Haftar, coinciding with the warlord's offensive on the capital Tripoli that started at the beginning of the same month.

On April 4, 2019, Haftar ordered his forces to advance on Tripoli, the seat of the GNA. Yet in the summer of 2020, the GNA managed to thwart the attack with Turkish backing and Haftar withdrew to the east.

In another article, the same month in the Georgetown Journal of International Affairs, Jonathan M. Winer, former U.S. special envoy for Libya, wrote: "U.S. policy changed under the Trump administration, which did nothing to respond to growing Russian involvement and Gulf state ambitions to return Libya to the relative stability of the Gadhafi era by installing a new dictator."

After Haftar's offensive on Tripoli failed, leading to the death of hundreds of people while his humanitarian crimes surfaced including mass graves found in regions previously controlled by the warlord, the Trump administration became more pronounced in its support for the GNA and the political process. This was most recently seen when Trump wrote a letter to the GNA's Prime Minister Fayez Sarraj last week stating Washington's support for the country in reestablishing unity and sovereignty and noting that the cease-fire in October and following progress, which was made possible through political dialogue, are positive steps toward ending the conflict.

With Turkey's support for the country's legitimate government, Libya has returned to the track of dialogue and a political process. Rival sides, the GNA and the Haftar-allied, Tobruk-based parliament, recently engaged in a U.N.-led process and agreed on holding presidential and parliamentarian elections in December 2021.

"Despite his criticism of Turkey in other areas, Biden is expected to cooperate and liaise closely with Turkey in Libya and this will help stabilize the country and achieve an end to the conflict sooner," he continued, saying that Turkey's role has been crucial "to save Tripoli and Libya as a whole from returning to military dictatorship."

"However, its involvement in Libya, which is based on military and maritime agreements, should become a permanent one and should be formalized as a strategic partnership whereby Turkey can help Libya stabilize and rebuild its institutions especially security institutions," he said. The countries have strong historical and cultural bonds "that make a strategic long relationship possible and strong," he added.

In the face of Haftar's aggressions, Ankara and the Tripoli-based internationally recognized government reached two separate memorandums of understanding (MoUs) on Nov. 27, 2019, one on military cooperation and the other on the maritime boundaries of countries in the Eastern Mediterranean.

Within this scope, Turkey has started providing military training to Libyan soldiers.

"The U.S. administration could side with Ankara to find a consensual solution, bringing all the Libyan belligerents together," Toumi said.

"Washington-Ankara cooperation is a must in Libya as it is in Syria. The Americans would try to pull Ankara away from Moscow by showing serious cooperation and looking for a common goal as strategic allies in the region, including the Eastern Mediterranean because Washington cannot stay in its wait-and-see attitude toward Ankara-Moscow rapprochement," he said.

"Turkey is filling a geopolitical vacuum in Libya that leads all the way to the Sahel, hence Western Africa. At the end of the day, Ankara would continue in its geopolitical and geoeconomic step-by-step strategy in North Africa and the Sahel, with or without the Americans," Toumi concluded.