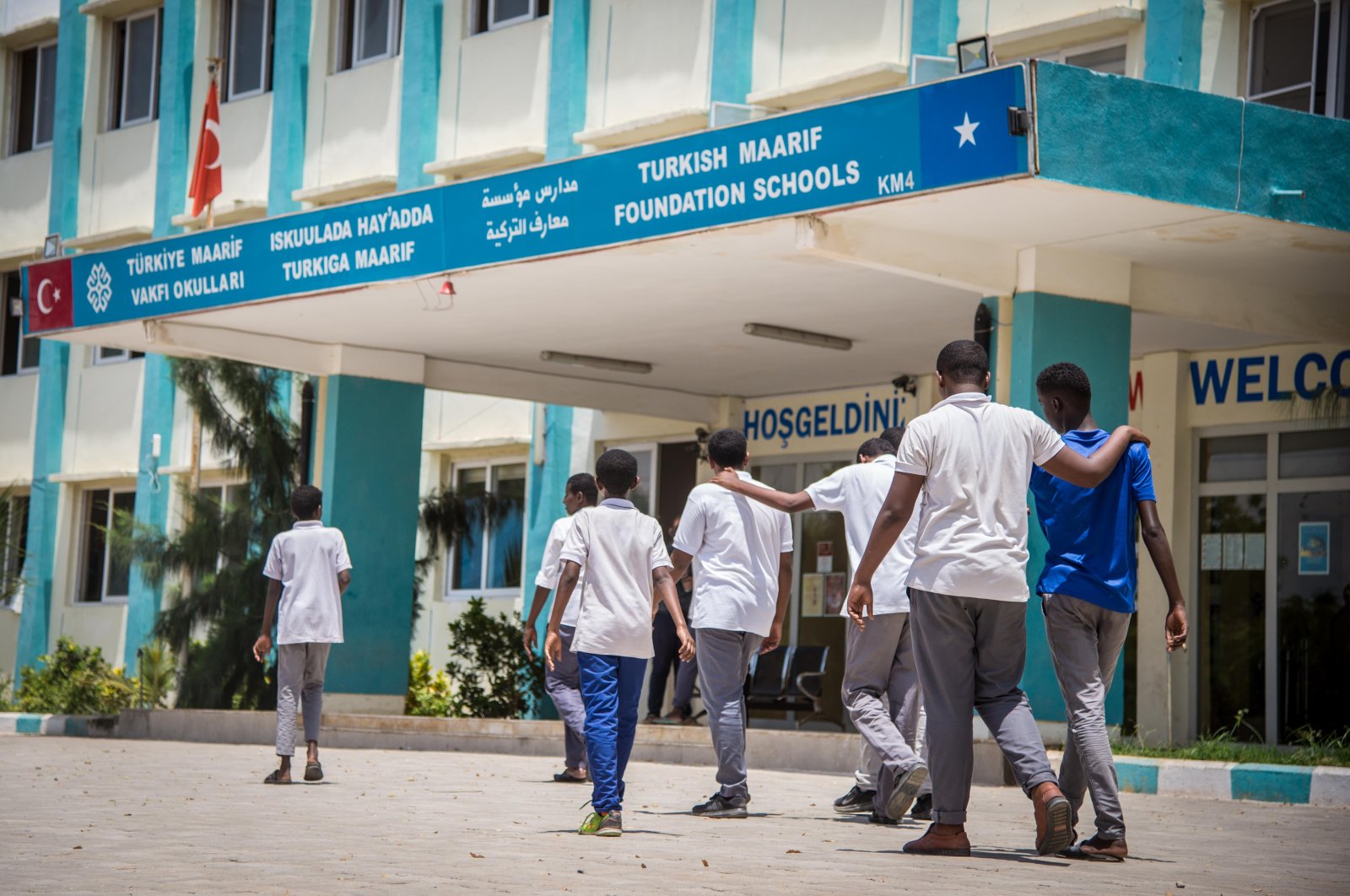 While Turkey’s non-colonial history and shared cultural roots make it a trustworthy partner, cooperation based on proportional interests and the fight against terrorism constitutes the uniqueness of its diplomacy with the African continent

Turkey's relations with Africa have aspects that prominent international actors lack regarding cultural and historical ties as well as a focus on proportionality in pursuing interests and transferring soft power to security in the form of cooperation against terrorism. All these factors make Turkey's Africa diplomacy a unique and comprehensive partnership, experts say.

"Turkey has not been criticized for 'prioritizing' its own interest or disproportionately benefiting itself in its approach toward the African states. Through its soft power devices and Turkish civil society organizations, Ankara has tried to improve its ties with Africa in the areas of health, education and construction," explained Ceren Gürseler, assistant professor in the International Relations Department at Nevşehir Hacı Bektaş Veli University.

"Moreover, the inclusion of Turkish schools within the measures of fighting terrorism indicates that at the political level it has passed from soft power to hard power and henceforth components regarding hard power have been launched in the relations between Africa and Turkey," she added.

Turkey's opening up to Africa, which dates back to the action plan adopted in 1998, took shape in 2005 when it was declared the “Year of Africa” by Ankara and Turkey was accorded observer status by the Africa Union the same year.

Kaan Devecioğlu, an assistant coordinator at the Africa Coordination and Training Center (AKEM), underlined that the changes in the international system have forced decision-makers in the Turkish foreign policy to develop new strategies toward Africa in line with the increasing importance of the continent.

The opening to Africa and now strategic partnership have been portrayed as Ankara’s diversification of its foreign policy and an indication of the multidimensional character of its foreign policy, said Gürseler, adding that relations with the African states also help Turkey present and underline its changing status in international politics from a recipient country to a net donor country.

“For example, African states played an important role in Turkey’s selection of a nonpermanent member of the U.N. Security Council for the term 2009-2010.”

Turkey’s Africa diplomacy has not followed a single approach since its inception and has changed facets several times.

While Ankara’s active involvement in Africa marked a new beginning for the Turkish Republic’s overall policy on the continent, she said it was revealed in 2014 that the opening era had ended and the strategic partnership era has begun after the second summit that year.

In 2009, there were only 12 Turkish embassies in African countries, with five of them in North Africa. Now, there are 42. While Turkish Airlines has flights to 60 different destinations in 39 countries, the Turkish Cooperation and Coordination Agency (TIKA) has nearly 30 coordination centers in the continent and the Foreign Economic Relations Board (DEIK) have joint business councils with more than half of African countries.

According to Gürseler, a brand-new aspect was also added to Ankara’s relations with Africa in the mid-2010s: the security dimension.

“The fight against terrorism, participating in international efforts on stability and Turkey’s contribution to military missions in certain African states are the most crucial components of this new aspect. Ankara’s contribution to anti-piracy missions in the Horn of Africa and its opening of a military training base in Somalia have been outstanding actions regarding the security aspect of Turkey’s involvement in Africa. Lastly, Ankara’s decision to include Africa in its fight against the Gülenist Terror Group (FETÖ) underscores the security aspect. In fact, recent diplomatic steps’ or initiatives’ main drive has been explaining FETÖ and its threats not only to Turkey but also to the African states as well. In other words, Ankara wants Africa’s cooperation in its fight against FETÖ.”

Another important aspect of Turkey’s Africa diplomacy has been historical roots and cultural components.

Mustafa Efe, the head of the Ankara-based Africa Strategic Research Center, described Turkey’s recent Africa diplomacy as a “return to Africa” rather than an “opening” due to historical and cultural ties.

Historical roots and frequently emphasizing cultural components show the different nature of Turkish-African relations when it is compared to other states, particularly Western states, Gürseler said.

“For instance, Turkey’s reference to Ottoman history constitutes an important part of its soft power. Hence, Turkey’s non-colonial history is highlighted officially. To the government circles, such an emphasis on Ottoman history and non-colonial past facilitates highlighting differences between Turkey and her European counterparts,” she explained.

Agreeing on the importance of the Ottoman period and non-colonial history, Hasan Aydın, an assistant coordinator at the Association of Researchers on Africa (AFAM), also pointed out another historical phenomenon in Turkey’s close relations with Africa: “The Turkish nation’s War of Independence under the leadership of Gazi Mustafa Kemal has become a glimmer of hope and inspiration for African nations in their future struggles against colonial powers.”

In addition to these historical aspects, Aydın also underlined the importance of Turkey’s current social, cultural and political components.

“Today, Turkey can access both Muslim and non-Muslim societies of the continent thanks to its social and political structure. In this context, Turkey as a country with a Muslim majority population can easily communicate with Africa's Muslim-majority countries. On the other hand, Turkey as a country with a secular state also can easily develop relations with Christian-majority countries of the continent.”

In fact, many developed countries and emerging powers in the global order have increased their activity and involvement in Africa after realizing the changing dynamics in the international system and the enhancing role of the continent. The soft power instruments have played a key role in these countries’ engagement with African states and societies, becoming one of the major tools of cultural and social activities and policies.

With relying on soft power devices, a new window has been opened for Turkey’s Africa policy. In this context, Turkey continues its presence in the continent with different government agencies and nongovernmental organizations (NGO) in various areas including health, education and humanitarian aid. The institutions like Maarif Foundation and the TIKA and their activities indicate that Turkey’s policy regarding the African states is multidimensional.

What sets Turkey's approach apart from other actors?

"While Turkey's non-colonial history and shared religion with most of the African societies contribute to its soft power potential, it also places Turkey's status at a better position compared to other actors in the continent," said Devecioğlu.

Gürseler, on the other hand, underlined that soft power becomes integrated with hard power in Turkey’s relations with African states as the Maarif Foundation and TIKA undertake roles in security aspects, as Turkey has demanded African cooperation in its fight against terrorism, particularly against FETÖ.

Turkish schools and entrepreneurship that had connections with FETÖ are included in the spectrum of Turkey’s fight against terrorism, she said, adding that Ankara has requested African authorities to close or transfer these institutions to legal ones decided by Ankara and take some legal measures against the members of FETÖ, the persons affiliated or have connections with FETÖ.

"The transfer of Turkish schools to the Maarif Foundation has been demanded in the African states. TIKA as one of the crucial actors of Turkey’s opening to the Africa process now has decided as the highest institution in executing relations with the continent. DEIK is the official and legal institution for the cooperation against FETÖ’s trade activities and its trade entrepreneurship," Gürseler said.

"Soft power efforts not supported by hard power, at some point, serve the interests of those who possess hard power in the region," Efe added.