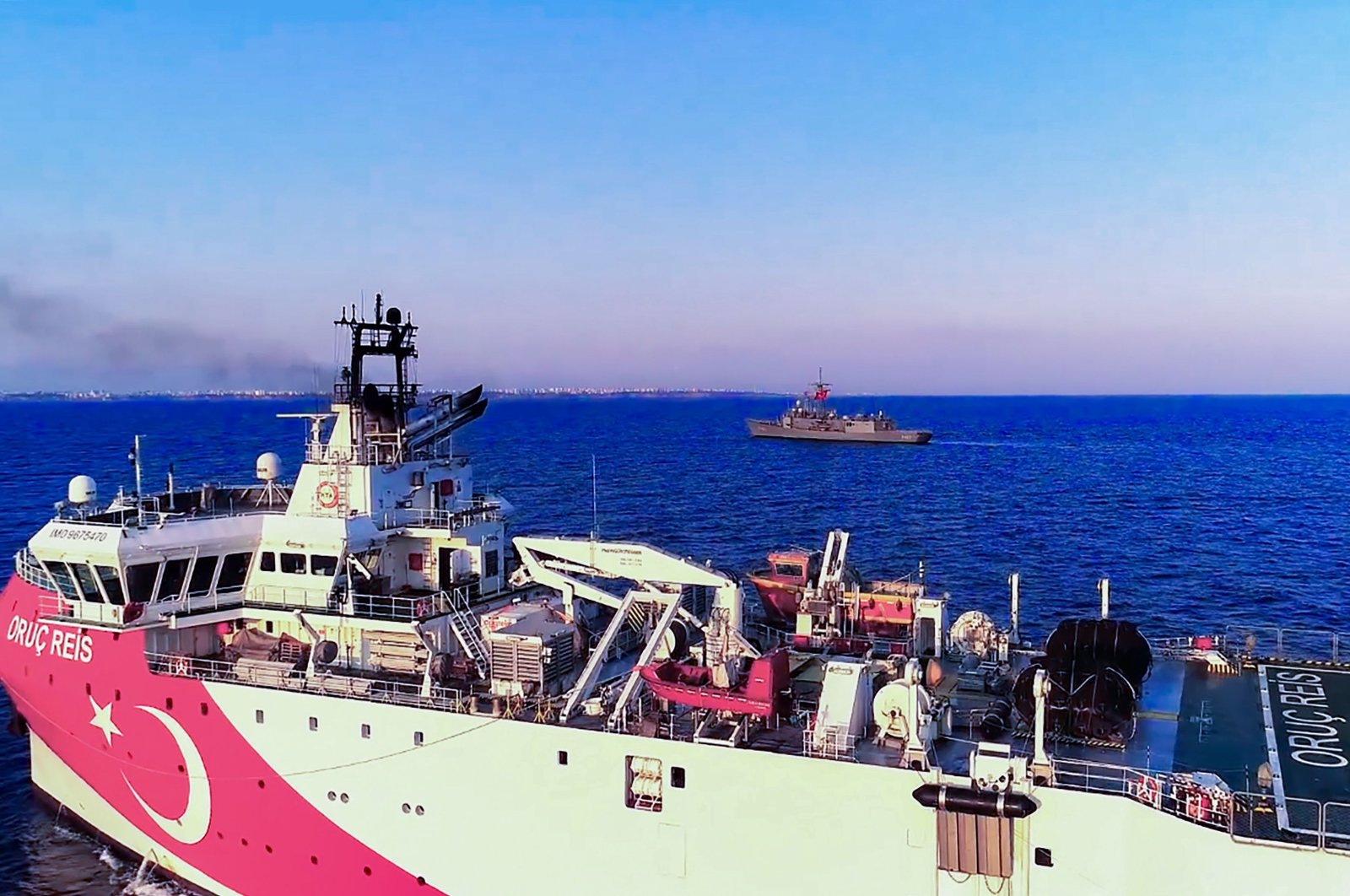 The region’s future stability depends on constructive dialogue and the will to resolve overlapping claims in the Eastern Mediterranean. Experts warn further competition that would compound existing tensions needs to be held at bay

The Mediterranean Sea is boiling with fierce competition as regional countries clash over disputes of maritime borders, sovereignty and energy research following the discovery of significant oil and gas reserves in the region. However, despite calls for calm and dialogue by Turkey and the European Union, provocations and the lack of dialogue could easily lead to an escalation of conflict in a climate of mistrust that has compounded tensions and uncertainty.

“Since the beginning, some EU countries have pursued a policy of monopolizing the Eastern Mediterranean – its reserves, transit passages, tools – to ensure security and to maximalize their interests at the expense of other littoral states,” Vişne Korkmaz of Nişantaşı University told Daily Sabah.

“Actors such as France, Greece and the Greek Cypriot administration that did not achieve their goals have adopted an irrational policy of escalation by taking unnecessary risks as their strategies come to a deadlock,” Korkmaz said, adding that the escalation strategy is risky since it could lead to unintended clashes.

Speaking to Daily Sabah, professor Michael Tanchum, a senior fellow at the Austrian Institute of European and Security Policy (AIES), said: “There is strong incentive for most of the parties in the region to contain the present escalation and find an off-ramp to the crisis. The danger of miscalculation or an accident sending the conflict in a direction no one intends is rising to an unprecedented level. Both Turkey and Greece now have a good measure of the positions of the other relevant regional and European actors. Each has made its own calculations.”

Tanchum pointed out that although several EU actors are either neutral or slightly leaning toward Turkey, any further action by Ankara would turn the EU against Turkey.

Only countries such as Turkey that have developed their naval capacities and whose deterrence has been tested and strengthened can take great risks, Korkmaz said, explaining that this is a rational way of taking risks and not aggressive or expansionist.

“Ankara can control the political, military and economic costs of such a policy. Yet, EU and NATO countries such as France and Greece take on the risk of creating fractures within the bloc and the alliance by escalating the crisis irrationally,” she said.

Greek Foreign Minister Nikos Dendias told Friday's emergency meeting of the EU Foreign Affairs Council that Turkey is the only one to blame for the escalation of tension in the Eastern Mediterranean and must leave the Greek continental shelf immediately. Although Greece, France and the Greek Cypriot administration sought sanctions against Turkey, the EU stated that the problem “can only be addressed through dialogue and negotiation, in good faith, in accordance with international law and in pursuit of the principle of good neighborly relations.”

The Greek Cypriot administration on Monday criticized EU partners over what it said was diffidence amounting to "a policy of appeasement" in dealing with Turkey.

The Greek Cypriot comments came after Greece failed to secure a strong commitment from fellow EU nations for sanctions against Turkey for carrying out offshore natural gas surveys in areas where both countries claim jurisdiction.

The agreement came one day after Ankara said it would postpone oil and gas exploration as a gesture of goodwill.

But after declaring the Greek-Egyptian deal "null and void," Turkey authorized the Oruç Reis seismic research vessel to continue its activities in an area within the country's continental shelf. Moreover, the Turkish navy said in a statement late Saturday that the drillship Yavuz, which has been based off Cyprus for the past few months, will explore off the southwestern coast of the island from Aug. 18 to Sept. 15.

As tensions heighten whenever a drillship leaves one of the ports in the Mediterranean, Greece has increased its military force in the region. In a strong show of support for Athens last week, France pledged to boost its military presence in the Eastern Mediterranean and sent two warships to the area Thursday for joint drills with the Greek navy. France also deployed two fighter planes to Crete.

With the warships navigating a relatively small patch of sea, there is a real danger of rapid escalation in the case of an accidental collision or hostile act.

Disputes over oil and gas research, overlapping claims of maritime zones, the status of a divided Cyprus, the Libyan civil war and the Syrian war complicate the quest for peace and stability in the Eastern Mediterranean, since all points of conflict are fundamentally inseparable.

Yet at the core of the entanglement of problems lies the issue of the limitation of maritime zones and Cyprus, Korkmaz pointed out.

“The discovery of energy reserves in the region has added a geoeconomic dimension to the already existing ones. The greatest obstacle to benefit from these reserves is not economical or technological, but rather political. The first political hindrance is the limitation of maritime zones while the second is the Cyprus issue,” Korkmaz said.

She elaborated that the Greek Cypriot administration preferred to determine its own maritime zones by making unilateral agreements harming the rights of Turkey and the Turkish Cypriots instead of engaging in dialogue to resolve the criteria through which the zones must be limited.

Since the discovery of significant gas reserves in the region a decade ago, countries have been engaged in renewed disputes over maritime borders, while international law presents few remedies. The deepening rift between the two countries has surfaced with Turkey’s decision to enhance energy exploration activities in the Eastern Mediterranean and the deal Ankara made with Libya’s official government last year.

On Nov. 27, Ankara and Libya's United Nations-recognized Government of National Accord (GNA) signed two separate pacts, one that encompasses military cooperation and the other maritime boundaries of the two countries in the Eastern Mediterranean.

The maritime pact, effective as of Dec. 8, 2019, asserted Turkey's rights in the region in the face of unilateral drilling by the Greek Cypriot administration, clarifying that the Turkish Republic of Northern Cyprus (TRNC) also has rights to the resources in the area. Yet, the Turkey-Libya deal was met with a retaliatory deal by Greece and Egypt.

In 1974, following a Greece-backed coup aimed at the annexation of Cyprus, Ankara had to intervene as a guarantor power. In 1983, the TRNC was founded. Efforts for peace talks have repeatedly failed.

Following a pledge of military support for Greece in the Eastern Mediterranean, France announced that a 2017 defense cooperation agreement with the Greek Cypriot administration had entered into force Aug. 1. In a statement Sunday, Turkey said, "It is unacceptable that, in this period, France takes steps to further escalate the tension in the current situation.” TRNC Prime Minister Ersin Tatar also decried French military support, saying the deal further delays the resolution of the issue. "France is a member of the U.N. Security Council and it has an essential duty of establishing and/or continuing peace," he said.

Ties between NATO allies France and Turkey have soured in recent months over Libya, as well as drilling in the Eastern Mediterranean.

“There is the additional factor in the equation, Ankara's effort to extend Turkey's influence throughout Africa, which puts it in direct competition with France,” Tanchum pointed out, stressing that from 2010 to 2016, Turkey opened 26 embassies in Africa.

“Turkey's military intervention in support of the Tripoli-based GNA has tilted the strategic gameboard more in Ankara's favor vis-a-vis France. Turkey is in a stronger position in the Maghreb and is advancing in the Sahel,” he added.

France, which had once been a significant player in the Middle East and North Africa, gradually lost its sphere of influence with its former colonies declaring independence and its retreat from the Levant. Conversely, Turkey has been growing as a game-changing actor in the region.

Korkmaz explained that the Mediterranean is a region gaining significance for Paris’ interests in sub-Saharan Africa, stating that France engaged in Libya eyeing the war-ravaged country’s resources and the control of the passageway through Libya.

“In order to comprehend France’s Eastern Mediterranean policy, one has to look at (French President Emmanuel) Macron’s EU and foreign policy. Macron did not win elections against Marine Le Pen (of the far-right Rassemblement National) on his own. French politics’ elements that are against Le Pen and the far-right supported Macron as an acceptable candidate,” Korkmaz said.

“Macron wanted to turn the EU into a global actor with the leadership of France and pursue new Gaullist politics that would enhance France’s strength,” she added.

Ankara has on every occasion vowed it wants to see energy as an incentive for a political resolution on the island and peace in the wider Mediterranean basin, not as a catalyst for further tensions. Most recently, President Recep Tayyip Erdoğan on Aug. 13 said a win-win solution for the ongoing crisis over the Eastern Mediterranean is possible through dialogue.

Turkey has also said energy resources near Cyprus must be shared fairly between the TRNC, which has issued Turkish Petroleum Corporation (TPAO) a license, and the Greek Cypriot administration.

Tanchum stressed that a third party is needed to keep local tensions at bay.

“A third party needs to play an active role in defusing the current combustible standoff between Turkey and Greece. Perhaps the most hopeful sign now is the constructive efforts of the United States to achieve a cease-fire and perhaps buffer zone in Libya,” Tanchum said, stressing that the delinking of flashpoints is necessary.

“There is a window now for an off-ramp. But that opportunity will need to be introduced by a third party with sufficient vision, diplomatic skill and commitment,” he added.

Indicating that Turkey cares about the stability of the region, Korkmaz said: "The fact that Turkey reiterates this call despite the latest crisis proves it protects its position and opens a window of opportunity for littoral states. In the end, there will be actors that will see the value of this window."