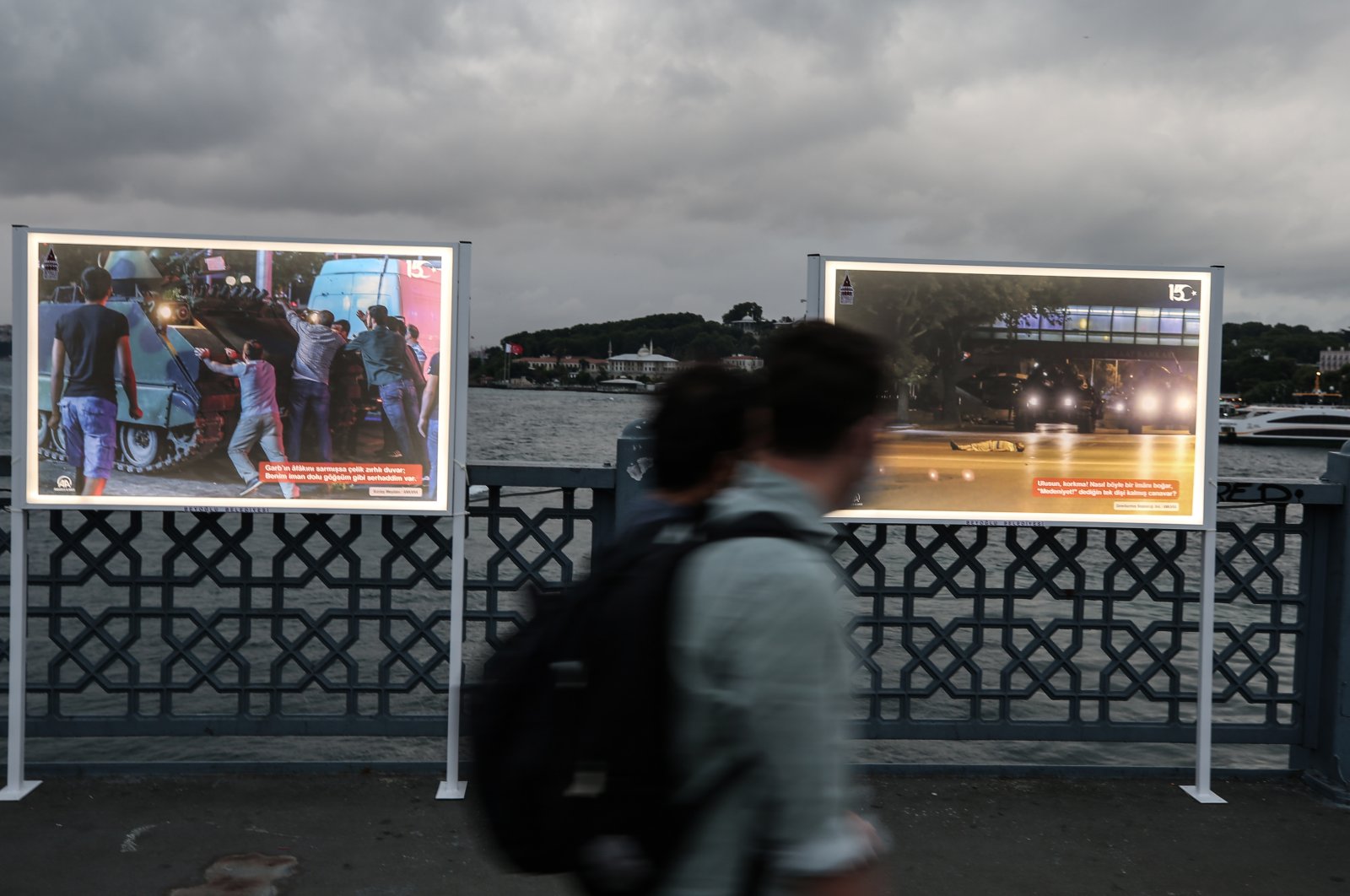 Pedestrians walk past a photo exhibition organized on Galata Bridge displaying the incidents and the people's resistance to the July 15 coup attempt by the Gülenist Terror Group (FETÖ), Istanbul, Turkey, July 13, 2020. (AA Photo)
by Nur Özkan Erbay Jul 15, 2020 9:27 am
Edited By Sinan Öztürk

As the latest representative of messianic cults, FETÖ bears several characteristics of new-generation terrorism operating internationally under the guise of a religious movement eyeing political and economic influence

Destructive messianic cults in several cases throughout the globe share the characteristic of abusing the belief, goodwill and spiritual needs of individuals as well as the sources of the state. Yet, beyond that, the Gülenist Terror Group (FETÖ) has shown us how a secret and secluded messianic cult group instrumentalizes violence and turns into a terrorist group to reach its ultimate aim or political agenda.

FETÖ is a cult organization operating on an international level, having a hierarchical structure, where absolute control is in the hands of the organization’s leader Fetullah Gülen. Outright secrecy and obedience to Gülen exist within the organization, while his orders and doctrines are accepted as a divine authority not to be questioned.

Four years after the July 15 coup attempt that tried to overthrow Turkey's democratically elected government and killed 251 people as well as injuring nearly 2,200 others, FETÖ still tries to uphold its presence especially abroad while Turkey continues its fight to reveal the structure and persons behind the organization.

“By killing our police, our soldiers, FETÖ has done the greatest betrayal in Turkish history,” Dr. Mustafa Yayla said in an interview with Daily Sabah. "The July 15 coup attempt brought to light the real face of the organization; signals and indications have existed even prior to the incident. Looking from outside and through the veil of secrecy, the organization seemed like an honorable, Muslim group.”

July 15 carried several characteristics of a terrorism typology while it proved that night that FETÖ is one of the most distinct cult terror representatives of our day.

Having both a public and clandestine nature, FETÖ’s public face comprised of schools, foundations, publishing houses, corporations as well as universities, nongovernmental organizations (NGOs), think tanks, websites, television networks and newspapers. Long before it was designated a national security threat, FETÖ was pursuing a policy of infiltration in a myriad of government agencies, including the army, law enforcement, the judiciary and bureaucracy. Followers managed to rise to the top ranks while disguising their ties to the group, becoming generals in the army and senior police chiefs.

Through its "imams," FETÖ kept in contact with its infiltrators and gave them orders. Their efforts to disguise themselves long prevented detection, and only after their first coup attempt in 2013 did investigations disclose their tactics. As FETÖ members have been identified, more have come forward to shed light on the group's plots, leading to additional arrests. Categorized for decades as a religious movement, FETÖ was a prominent group in Turkey, but investigations after the coup attempts revealed an extensive network of members that were hiding their allegiance, known as “mahrem” in Turkish and meaning "secret."

“They (FETÖ) have used Islam as a template,” Yayla said, adding that messianic movements have been widely known in the Islamic world. “Gülen has presented himself as a redeemer while pursuing political and economic aims in the background.”

“Under the guise of 'hizmet' or service movement for years, FETÖ has gathered uncontrolled and unrecorded money. Taking individual by individual, it could be said that not everyone was aware of the organization’s main goal. They have acted in accordance with the orders coming from above – those that opposed were either excluded or cut off,” Yayla stated, adding that FETÖ used people, who in any event, should have rejected orders that were violating the principles of Islam.

Though it may seem that the messianic property of terrorism is a new phenomenon, several examples and works exist displaying that messianic cult terrorism has existed for centuries. Especially during this century, the tendency of such cult groups to use their beliefs with the aim of legitimizing violence has increased, which is accepted as one of the major changes terrorism has undergone.

A cult is often referred to as an ideological organization that is ruled by a charismatic leader demanding a high level of dedication from the followers, which is why they are also regarded as places where the risk of manipulation and abuse runs high.

The white Christian supremacist movements and the Jewish messianic movement of Zealots are strong representatives of messianic and apocalyptic beliefs in the West, while the Hashashins of Hasan Sabbah in the 11th century, the Qadiani under the leadership of Mirza Ghulam Ahmad in 19th century Pakistan and the 13th-century Babai Revolt led by Baba Ishak, who was described as a “Mahdi” or redeemer, during the Seljuk Empire period, are widely known examples from the East.

A large part of the mentioned messianic cult groups have constituted a significant threat to the individual, the state and the regime as well as all aspects of security during their time.

Just as in other cult organizations, the July 15 coup attempt was in some way the trigger of a Judgement Day for FETÖ, which legitimizes terror under a messianic character. The organization, which tended toward more relentless tactics especially after 2012 in its acts and aims, legitimizes its actions under a supreme goal.

Despite the evident threat that the organization poses, FETÖ has managed to continue its weakened presence abroad as networks in Europe and the U.S. remain untouched. Turkey has frequently warned that a similar scenario of illegal activities could take place in countries that tolerate FETÖ, however, Ankara’s calls have mainly been ignored.

“People engaged in illegal activities will carry out these activities everywhere,” Yayla stressed, speaking on FETÖ’s presence outside Turkey, “After a period of time, FETÖ might also betray these countries or cooperate with international terrorist organizations there while inflicting harm on the country they are found in.”

Gülen has been in a self-imposed exile in U.S.’s Pennsylvania’s since 1999. Turkey has issued multiple extradition requests to the U.S. for Gülen but despite close relations between the two countries, they have fallen on deaf ears. Turkey has sent several folders full of evidence implicating Gülen in a number of criminal cases in Turkey, but Washington has failed to take steps toward extradition. The first request was sent four days after the 2016 coup attempt, and although the United States condemned the illegal operation, it has been reluctant to deport FETÖ members to Turkey.

“Turkey has to use diplomacy to tackle the organization’s presence abroad and has to raise awareness. It has to pursue this aim both on the high-level of diplomacy and through businessmen, NGOs, as well as other humanitarian organizations on the bottom. Thereby, other countries have to be informed and FETÖ’s dangers have to be explained,” Yayla said.