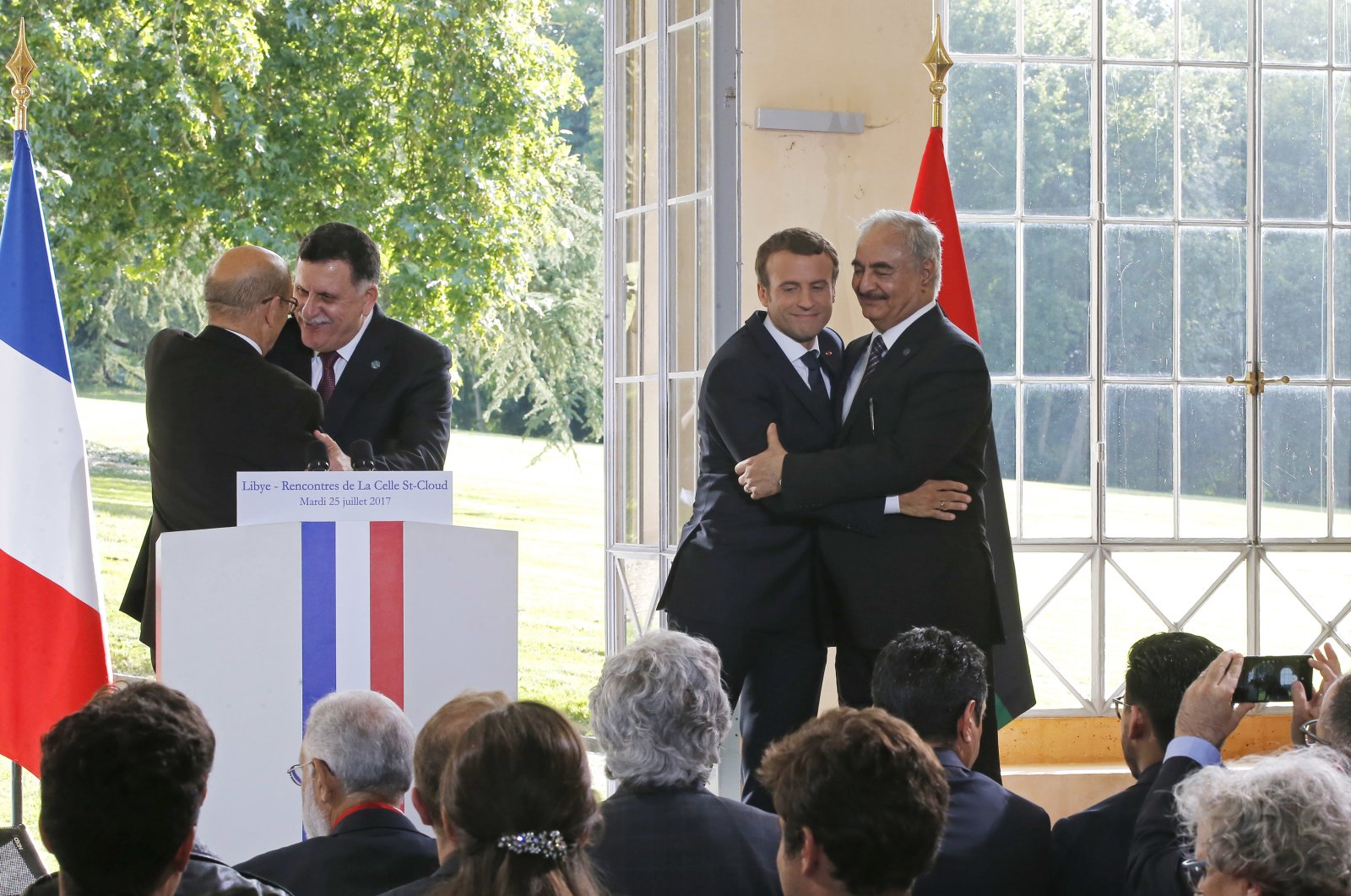 France has continued its denial of having a presence in oil-rich Libya in support of a putschist who has wreaked havoc across the country for years. Yet now, Paris appears clueless about the future of its presence in the country

Having interfered in the Libyan civil war since at least 2011 and building up a warlord to seize power, France is still denying its involvement and has reached a point where it does not know how to proceed with its approach and interests.

“France ostensibly supports a political solution to the country’s conflict,” a diplomatic source told Daily Sabah. “It pretends as if it is not fanning the flames of war in Libya.”

The source, who wished to remain anonymous due to restrictions on speaking to the press, underlined that the situation for France changed after the Tripoli offensive, leaving it in a place from which it does not know how to proceed and causing it to pursue “an ill-tempered” policy. “Turkey is of the view that French decision-makers are headed in the wrong direction,” the source added.

France has apparently been growing aggressive in its recent statements about the war-ravaged country, especially since the United Nations-recognized Government of National Accord (GNA) thwarted a 14-month long campaign of putschist Gen. Khalifa Haftar to seize control of the capital Tripoli with the backing of France, the United Arab Emirates, Russia and Egypt. With the support of Turkey, the official government in Libya reversed the military situation on the field by pushing back the warlord’s forces and making significant gains, including retaking strategic provinces and air bases.

"France, which (French President Emmanuel) Macron governs, or rather which he can't manage to govern at the moment, has been in Libya only for its own interests and ambitions with a destructive approach, in the same way that it pushed Africa into instability in the past with a colonialist approach and bombed and quit Libya in 2011," Foreign Minister Mevlüt Çavuşoğlu told reporters in Ankara last week after Macron attacked Turkey for its role in Libya in support of the U.N.-backed government.

The Sahel, which stretches from the Atlantic coast south of the Sahara to the Red Sea and covers the countries of Burkina Faso, Chad, Mali, Mauritania and Niger, is facing many difficulties and challenges, among which are the growing threats of terrorism and organized crime, which increase the fragility of these countries. France has been a constant actor in the region with its presence dating back to its colonial rule of these countries. Most recently, France boosted its military presence by adding 600 more troops to its 4,500-strong operation in the region. France claims that Operation Barkhane, Paris’ largest overseas operation, exists for counterterrorism efforts and in the name of “collective security." However, the French presence in the region has been a growing source of tension across francophone Africa in recent years as anti-French sentiment rises, as well as public opposition to the French military intervention in the Sahel, seen as undermining national sovereignty. Despite France's claims that its motives are purely to establish peace and stability, Paris has political and commercial interests in the Sahel as well as the aim of reducing mounting migration.

France’s footprint in the North African country of Libya has been expanding tacitly over the years under the pretext of fighting “terrorism.” Its presence came to light explicitly for the first time when France admitted in 2016 that three French soldiers were killed in a helicopter accident during an intelligence-gathering mission in Libya. These French soldiers were the first confirmed Western military casualties to occur after it became known that year that foreign special forces were operating on the ground in Libya.

France took a leading role in the NATO air campaign that helped overthrow autocratic leader Moammar Gadhafi in 2011. The country has since descended into chaos with two rival powers emerging – the GNA in the west and Haftar based in the east.

The French have been working alongside forces loyal to the putschist general, who rejected the official Libyan government. Last July, French missiles were found on a base south of the capital Tripoli belonging to militias loyal to Haftar. France admitted the weapons belonged to it yet denied supplying them to Haftar in breach of a U.N. arms embargo, saying French forces in Libya had lost track of them.

“Although France never officially acknowledged providing weapons, training, intelligence and special forces assistance to Haftar, it seems that Paris had been involved in Libya probably since 2015 by training and setting up Haftar’s military forces,” Abdennour Toumi, a North Africa expert at the Center for Middle Eastern Strategic Studies (ORSAM), told Daily Sabah, “It’s not fooling anyone or ‘un secret de polichinelle,’ as the French would say,” he added.

“In the context of the Libyan civil war, the French have a military presence in the North African state, which is no secret to anyone, despite all the efforts by the French ministries of defense and foreign affairs to hide the fact that there is a French military and intelligence presence in Libya, supporting Haftar,” Toumi added.

The official Libyan government has frequently condemned French support to the warlord as undermining its democratic values. A potential reason for France’s insistent meddling in Libyan affairs could be its aim to gain advantages over the country’s rich natural resources for oil major Total, which has been operating in Libya. The Turkish Foreign Ministry in a written statement last week stated that France supported Haftar in order to have the upper hand over the natural resources of Libya. Yet, France’s projections in supporting Haftar were not only commercial concerns but rather also to gain strategic superiority in the Sahel.

“France is the second importer of Libyan oil; this could be tied to Paris’ alignment with the Emirati, Saudi and Egyptian regimes, to whom it has sold billions of dollars of weapons and who also back Haftar,” Toumi said, noting that French Foreign Minister Jean-Yves Le Drian was the one who convinced Macron to back Haftar – a policy Le Drian has been pursuing during his time as defense minister.

Toumi said Paris' Libya policy is a fiasco and the latest developments on the ground have put it in a terrible situation. He added that the French policy in Libya has taken a radical stance and to some extent has established a new doctrine in its Middle East and North Africa (MENA) foreign policy, “moving away from its Realpolitik and adopting a ‘Riyalpolitik.’"

Pointing out France’s active support when Haftar launched his operation against Tripoli last year, he pointed out that a group of armed French nationals intercepted along the Tunisia-Libya border were members of France's intelligence services.

The French embassy in Tunis said at the time the individuals were members of a security detail attached to the French diplomatic mission in Libya, and the movement was part of a routine transfer of staff between Tripoli and Tunisia.

Quoting a "well-placed source" at Tunisia's presidential palace, Radio France International reported the men were not diplomats as claimed but instead intelligence agents.

While France has rejected the accusations, the GNA's interior ministry announced that it had suspended "all relations between the ministry and the French side ... due to the position of the French government in support of the criminal Haftar."

Canlı also said that France remained silent amid Haftar's clear war crimes and continued to recognize him as a legitimate actor in diplomatic initiatives.

Libya's government was founded in 2015 under a U.N.-led agreement, but efforts for a long-term political settlement failed due to the military offensive by Haftar's forces. Haftar's militias have caused the deaths of at least 1,000 civilians and committed several crimes against humanity, including planting landmines in civilian areas on their retreat. The latest example of their brutality has been mass graves discovered in Tarhuna province which include the bodies of children.

France clueless in approach toward Turkey

Ties between NATO allies France and Turkey have soured in recent weeks over Libya, as well as the conflict in northern Syria and drilling in the Eastern Mediterranean.

“Paris' tense relations with Ankara are amateurish and senseless because it feels like Paris does not know what to do or how to approach the role of Turkey, which is not the Turkey of 1920 anymore,” Toumi said, referring to Turkey’s support to the GNA, under the scope of which the two governments signed a maritime and defense cooperation deal last year.

“Turkey emerged as a real pivotal state in the region and imposed itself on the world stage,” Toumi said. “And this did not please Paris or its axis.”

The site of one of the Middle East’s most protracted conflicts, Libya has become the main point of discussions and tension between Ankara and Paris lately as Turkish officials harshly criticized France’s support of the warlord, its economic ambitions and its aim of trying to increase Russia's role in Libya, despite the fact that the NATO alliance sees Moscow as a threat.

Turkey, which enjoys friendly relations with the GNA, has stated several times that its presence in Libya stems from the invitation of GNA Prime Minister Fayez Sarraj and that the military training and consultancy services to the Libyan government's armed forces are completely legitimate.

However, France has accused Turkey of repeated violations of the U.N. arms embargo on Libya and branded the Turkish government an obstacle to securing a cease-fire in the North African nation. With relations already strained, France said last week its frigate Courbet was “lit up” three times by a Turkish naval targeting radar on June 10 during the Sea Guardian mission, which is helping to provide maritime security in the Mediterranean. The Turkish Foreign Ministry responded by requesting an apology from France for making "false claims" about the naval incident. The French government then sent a letter to NATO saying it was halting its participation in Sea Guardian “temporarily.”

France's actions regarding the issue are “like a child whose toy has been taken away," the diplomatic source told Daily Sabah, urging France to take a more constructive stance toward the Libyan crisis as Germany did by holding the Berlin conference in January with an aim to establish a political path to peace for the yearslong conflict.