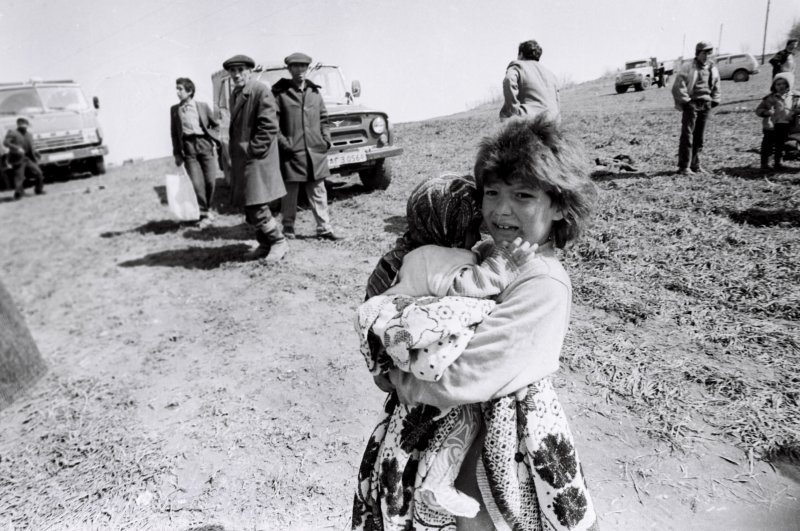 On Feb. 25-25, 1992, 613 civilians were killed by Armenian soldiers in Khojaly, a strategically important village with the only airport in the disputed Nagorno-Karabakh region of Azerbaijan, originally inhabited by 7,000 people. (AA PHOTO)
by Şeyma Nazlı Gürbüz Feb 25, 2020 2:06 pm
RECOMMENDED

On Feb.15, an unlikely event took place during the Munich Security Conference, as the leaders of Azerbaijan and Armenia came together for a public debate – a first for the long complex history of the two neighbors.

The event sparked hope for finding a solution to the decadelong conflict between the two countries. However, that hope did not last long, as the discussion quickly turned into a historical debate on past unresolved issues and raised a question: Is it possible to come to terms when various historical conflicts – particularly the Khojaly massacre – are awaiting recognition and clarification with the expectation of remorse?

Twenty-eight years ago today, 613 civilians were killed by Armenian soldiers in Khojaly, a strategically important village with the only airport in the disputed Nagorno-Karabakh region of Azerbaijan, originally inhabited by 7,000 people. The attack killed 106 women, 63 children and 70 elderly people.

Some 487 people, including 76 children, were critically injured, while 150 of 1,275 Azerbaijanis whom the Armenians captured during the massacre remain missing to date. Eight families were completely wiped out, 130 children lost their fathers, and some 25 children became orphans in the massacre. According to the investigations by the Azeri government based on the expert views and testimonies of 2,000 survivors, Armenian forces tortured the captives by burning them alive, slaughtering people, peeling off their scalps, cutting off ears, noses or sexual organs, and removing the eyes, alongside mass killings.

However, despite all the evidence and horrors of the incident that still continues to haunt the community, Armenian authorities are far from acknowledging responsibility. They even go as far as to claim that in reality, Azeri people committed the Khojaly massacre themselves, as Armenian Prime Minister Nikol Pashinyan did during his open debate with President Ilham Aliyev of Azerbaijan in Munich.

“The people of Azerbaijan who suffer from Armenian aggression want to return to their homes. It is a fundamental right, and they have been deprived of this right for almost 30 years,” said Aliyev during the debate, pointing at the major refugee crisis that the Armenian attacks caused in the region where 600,000 Azerbaijanis were displaced.

The conflict over Nagorno-Karabakh displaced hundreds of Azerbaijanis as the Armenian occupation extended far beyond the borders of the de jure autonomous region, which has declared independence as the Republic of Artsakh and is only recognized by Armenia.

The economic difficulties of the Azeri government failed to provide for the refugees, as they were forced to live under the harsh conditions. Reports revealed that the refugees had to live in small, mass housing alongside dozens of other refugee families, sharing one bathroom sometimes with almost 50 people with a massive lack of sanitary water. Still, there has been an improvement in the circumstances of the refugees as the last emergency camps shut down in 2008 and U.N. aid of overall $1 billion assisted them. There are also government initiatives such as “Azerbaijan – 2020: the Vision of the Future,” which focuses on reducing poverty by focusing on increasing salaries and pensions. The initiative had a positive effect as the poverty rates in the country fell from 9% in 2000 to 7.6% in 2011. Still, the government of Azerbaijan relies heavily on foreign aid to provide relief to the refugees, which puts their circumstances in a shaky position.

Valeh Hüseynov is one of the survivors of the Khojaly massacre. He managed to escape from the Armenian forces after 27 days of captivity. Speaking to Anadolu Agency (AA), Hüseynov, age 52, detailed the unforgettable massacre, when he lost his wife, with all of its horrors, from the shortage of energy sources to constant attacks from armored vehicles which led them to flee the region.

“Old people, women and children were going through the Gargar River and were walking on the road in the dark within a forest. After a while, they (Armenians) found us and fired at us. The Armenians massacred many innocent people brutally. My wife, whom I got married to five months prior to the incident, also took a bullet and was martyred,” he said, adding that although some people managed to escape, he preferred to stay as he did not want to leave his wife’s body there and eventually, ended up in captivity.

Hüseynov stated that the Armenian forces tortured him from the beginning of his captivity.

“I was playing guitar. When they heard of this, they first broke my fingers and then pulled off my nails. Then, they put my hand over a heated stove and burned it. I went through 27 days of hell but managed to survive,” he recounted. An Azeri commander secured Hüseynov's release from captivity by trading three Armenian captives.

“The Armenian captives who were replaced were in a pretty good condition whereas I was black and blue, barely able to stand up,” he recounted. He said he has recovered from the physical injuries, but he will only get past the emotional damage once Nagorno-Karabakh is freed from the illegal occupation.

Four U.N. Security Council and two General Assembly resolutions, as well as decisions by many other international organizations, agree to this fact and demand withdrawal of the Armenian forces from Nagorno-Karabakh and seven other occupied regions of Azerbaijan.

The Organization for Security and Co-operation in Europe (OSCE) Minsk Group – co-chaired by France, Russia and the U.S. – was formed to find a peaceful solution to the conflict but has not yielded any results yet.

During the open debate, both leaders mentioned the possibility of peace briefly and stated that since mid-2018, the conflict between the two sides has mostly stalled.

The peace talks were mostly focused on the past, even to the point of Azerbaijan's existence back in the first century B.C.-era of King Tigran the Great, a point that was mentioned by Pashinyan. No concrete remarks were made to suggest hope for the future.

The constant exchange of fire on the border and the race of armament between the two also act as an obstacle to the peace talks. For instance, Azerbaijan is known for its high investment in weaponry with numbers bigger then Armenia’s entire budget, despite OSCE's demands from the international community to stop selling weapons to either side of the conflict. The biggest motivation for Azerbaijan’s arms purchase is the horrors of the Khojaly massacre and the determination to never experience such an event again.

Today, the commemoration of the massacre will take place among Azeri communities around the world, including Turkey where the people sympathize with the sorrow of Azerbaijan.

Speaking to AA about the incident, Azerbaijan's envoy to Turkey, Khazar Ibrahim, said the "genocide" committed in 1992 against hundreds of Azerbaijanis by Armenians was one of the darkest pages in the history of the 20th century.

The ambassador said he believes if such tragedies are forgotten, they will be followed by more genocides and massacres. He added that the massacres, which followed Khojaly, probably became possible because the perpetrators were emboldened by the "lack of punishment."

"Don't forget. If we forget, things happen again, and tomorrow it could be somebody else," Ibrahim said.

He said although the Azerbaijani side tells the "truth and facts" about the massacre, Armenian officials try to falsify it.

"The Armenian side is trying to hide the truth because it's a harsh one for them," he said.

Ibrahim noted that there are a number of documents, video materials along with many local and international witnesses who can "testify the truth."

Recalling the incident, Turkey’s national parliament also released a statement on the massacre on Tuesday, saying that it is not a historical event; it is a bitter truth of the modern world. The statement called on the international community to intervene in such cases to avoid similar incidents in the future.

The Turkic Council was one of the major international organizations that condemned the incident, stating on Tuesday that they share the sorrows of the Azeri people. Speaking on the issue, the general secretariat of the council, Baghdad Amreyev, said they stand with the Azeri government and highlighted that the Khojaly massacre is similar to no other.

The head of Turkey’s opposition Nationalist Movement Party (MHP) also made a speech on the massacre on Tuesday, saying that crimes against humanity including genocide were committed in Khojaly.

Devlet Bahçeli a senior Turkish politician, told his party's parliamentary group that those crimes have gone unpunished. "The Khojaly genocide should be registered in the International Criminal Court, War Crimes Tribunal, Human Rights Court. Whatever is necessary should be done for the criminals," he said.