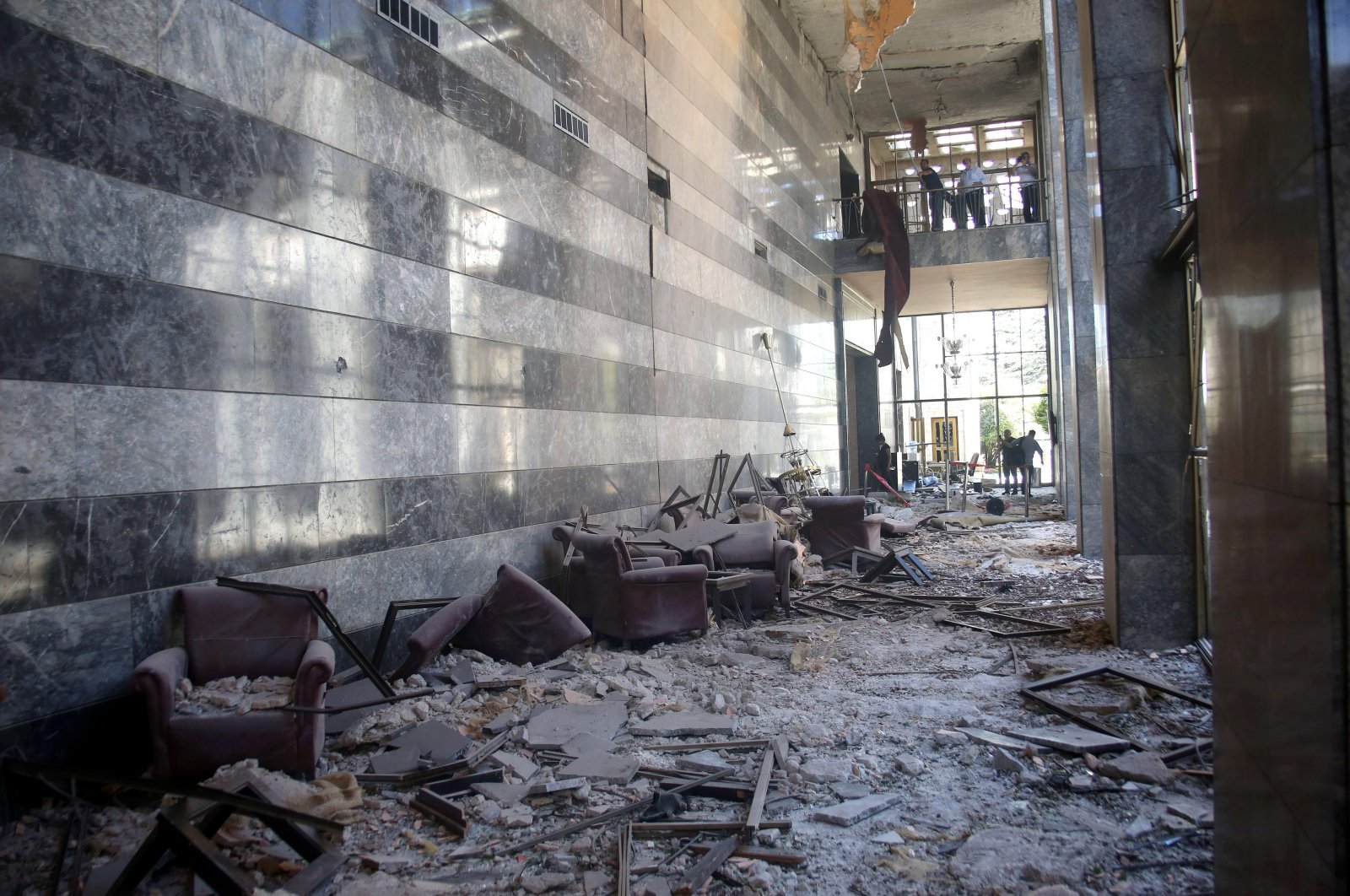 A view of the damage caused by the bombs dropped by the FETÖ's coup plotters to the Turkish parliament in Ankara, July 15, 2016. (PHOTO BY ALİ EKEYILMAZ)
by Şeyma Nazlı Gürbüz Jul 15, 2020 12:39 pm
RECOMMENDED

Four years on, the failed coup attempt of July 15, 2016, continues to be alive in the memories of the public, including the legislators who experienced first-hand just how far a coup can go when the Turkish Parliament was bombed for the first time in its history.

Highlighting the changing effect of the incident on the country's politics, the surviving parliamentarians of that day describe the harrowing event as a breaking point in Turkish democracy.

On that fateful summer night, Turkey witnessed its people rush onto the streets in resistance of the coup plotters, while its deputies went to Parliament to be the guardians of the nation's will.

"When we look at the recent history of Turkey, we see how many schemes have been made from both in and outside the country. The 1960 coup, 1980 coup were all results of these schemes. Whenever Turkey gathers strength, some circles become uncomfortable and try to bring it down. On July 15, we, as a nation, finally said 'No' to these schemes. It was a major breaking point," said Ayşe Keşir, Düzce deputy of the ruling Justice and Development Party (AK Party).

"I believe that when Turkey's history is written, July 15 will be mentioned as the day when the schemes failed," she added.

On the night of July 14, Parliament had worked until 2:24 a.m. on a 75-article bill enhancing the investment sector. the plenary session planned to be active on July 15 as well, in case, work on the bill could not be completed. However, since the members of different political parties agreed on the bill, the talks ended, making Friday's session unnecessary.

If the parties had failed to agree, the plenary assembly would have been working when the putschists attacked Parliament, with the majority of the deputies in it. Instead, many deputies returned to their respective provinces while some stayed in the capital Ankara.

The next day, on July 15, with fighter jets flying over the capital, AK Party deputies started chatting on their Whatsapp group, trying to figure out what was going on.

"I heard that there were soldiers on the Bosphorus Bridge but could not figure out what was going on. At about 10:30 p.m., I finally got what was happening, which was a coup. At the same time, we were communicating with fellow parliamentarians. It took me about an hour to get prepared to go out. As I was just leaving the house, the coup statement was read on TV. I listened to it and left. I mentioned to my children the possibility of me not returning to our home ever again. I told them what to do if my husband and I never came back," Keşir remembered, explaining the risks of leaving the house at that time.

Similar discussions were also taking place in the headquarters of the Nationalist Movement Party (MHP).

"The low flying of the planes in the capital was suspicious since it wasn’t something we were used to," said Erkan Akçay, the Manisa deputy of the MHP.

"That night," Akçay continued, "I took every risk, said goodbye to my family and went to the MHP headquarters. I visited our party head Devlet Bahçeli, who was carefully monitoring the developments while directing us on how to react. He told us that the coup plotters would initially target Parliament, that’s why we, as the deputies, should be in there. He ordered us to go to the Parliament at once and guard the structure. We called only the deputies who were present within the capital at that time."

"We have decided with other parliamentarians to go to Parliament. I was one of the eight to 10 deputies who reached Parliament first. We were mostly women deputies, initially. Then, the parliamentary speaker said we needed to start a plenary session. However, the door of the plenum was locked so opening it was something to deal with at that time," Keşir said.

Keşir, a former journalist, says as the events were culminating in Parliament, she felt the need to announce the opening of the plenary session to the public. As a result, she was the first to let Turkey know about the situation at Parliament's via FaceTime from her cellphone.

"The president was calling the people to go out at that time. I wanted people to see that their deputies were also responding to that call. I had reached out to CNN Türk to inform people about the developments in Parliament. We were 25 deputies, not very crowded at first. We connected to the studio live. I acted like a director in there. I asked questions to the other deputies and allowed them to explain what was going on. I wanted to show the determination of the deputies to the public," she said.

Meanwhile, Parliament prevented any entrance into the building except for the deputies as roads to the area had been closed.

The plenary session started with the parliamentary speaker not wearing a suit for the first time in the republic's history.

According to Akçay, inside the Parliament, deputies agreed that they would never bow to the coup attempt, that they must deliver the necessary reaction against the plotters and that the putschists would never be successful.

"There was a very strong, spiritual atmosphere, filled with excitement and determination. This was proof that we were acting in accordance with the Turkish nation’s unity and solidarity," he emphasized.

"About that time," Keşir continued, "the first bomb fell on Parliament's garden. Then, the second bomb fell on the building itself. I was there. The plenum was very strongly shaken. I remember telling my friend at that point that 'Syrians go through this every single day.' None of the deputies present at the plenum at that time felt the need to escape or be covered. We were in a standstill. Then, CNN Türk reached out to me once again to hear about the bombings. I now remember saying in the broadcast that 'Our nation can rest easy, we are taking care of Parliament.'"

A total of three bombs were dropped on Parliament. The first one hit the Parliament's garden while the second one fell near to the plenum, causing massive damage to the building. The deputies responded to the bombs by clapping, protesting the attack. The third also fell on the main building, however, the deputies were already in the sanctuary by that time.

Those three bombs injured 12 policemen and the AK Party's Hatay deputy Hacı Bayram Türkoğlu, along with his wife and daughter, who had to be hospitalized.

"We did not have a proper connection with the outside world since our phone batteries died in a few hours. Thus, our families could not hear from us either. My mom did not watch the broadcast on CNN Türk. A close friend called her and let her know that a bomb fell on the Parliament. Then, naturally, my mom assumed that I was dead. She told the friend, 'Martyrdom finally has touched our family.' Our families went through a lot at that time," Keşir stated.

In Akçay's opinion, the coup plotters were triggered by the fearlessness of the parliamentarians and felt the need to attack them.

"No one had any fear or concern, we were all determined and ambitious. The coup plotters probably saw our live television reports and grew concerned, leading them to eventually send bombs to the Parliament. We prevented the invasion of the Parliament," he stated.

At 5:11 a.m., the coup plotters tried to bring soldiers to Parliament's ceremonial ground via helicopters. Security forces in Parliament, however, fought them off and prevented them from entering the building.

Meanwhile, in the sanctuary, a declaration was jointly prepared by the parliamentarians for the next day's plenary session.

"Until about 6 a.m., the tension continued. The chaos had ended pretty much by then and we were able to leave the Parliament at about 10 a.m. We were only able to tell our families that we were safe and sound when we got home. We also learned about the details of the incident, the martyrs, etc. when we got home. What we did as deputies were nothing compared to those who sacrificed their lives," Keşir added.

In terms of the after-effects of the incident, the parliamentarians underlined that the coup attempt has had a major influence on the country's politics, highlighting that the nation's fight that night permanently marked Turkey's youths, who will govern in the future.

"I am a child of a patriotic family. I have been raised that way. That night, I was proud to be a part of the Turkish nation. Thank God I was born into such a nation. Our president's firm stance made a difference that day. We have the memories of Adnan Menderes in our collective consciousness as a society. Even if we had not personally gone through that experience, due to that collective memory, we would feel the need not to do the same mistakes again. I believe in the strength of the nation. My belief was revived that day," she said.

"Then, remember, after July 15, there were democracy rallies everywhere for about a month. At those rallies, I saw small children. It will make a mark in their memory. These children will govern this country in 15 to 20 years with those memories in their minds. We could not teach them this feeling of patriotism from books. They lived it and thus learned it properly. In this respect, I have to say that the fight against the coup plotters on July 15 was a seed placed in our youth's mind," she added.

For Akçay, there is no doubt that July 15 is a milestone for Turkey’s democratic history.

"Important events that led up to July 15 proved that in order for the country to be saved from a chaotic atmosphere, we needed solid reforms. In 112 years, our democracy and political life have been interrupted by many coups, memorandums and tutelage initiatives, while structural problems have caused governmental crises and led the country to have constant political instability," he said, underlining that the coup attempt proved the country could no longer continue with its old governance system, hinting at the transition to the presidential system a year later.

Turkish voters narrowly endorsed an executive presidency in the April 16, 2017 referendum with 51.4 percent of the votes. The official transition to the new system took place when Erdoğan took oath as president in Parliament after the June 24, 2018 election.

"This system has emerged as a result of an obligation, not out of arbitrary decisions," Akçay said, referring to the presidential system as the peak of Turkish democracy.

"July 15 shows that meaningless polarizations and disagreements should come to an end. Politics should focus on national aims. In order for this to be achieved, agreement against FETÖ’s coup attempt should be achieved," he said.

Yet, in Akçay's opinion, even after four years, the Turkish political scene still fails to achieve this goal in the fight against FETÖ.