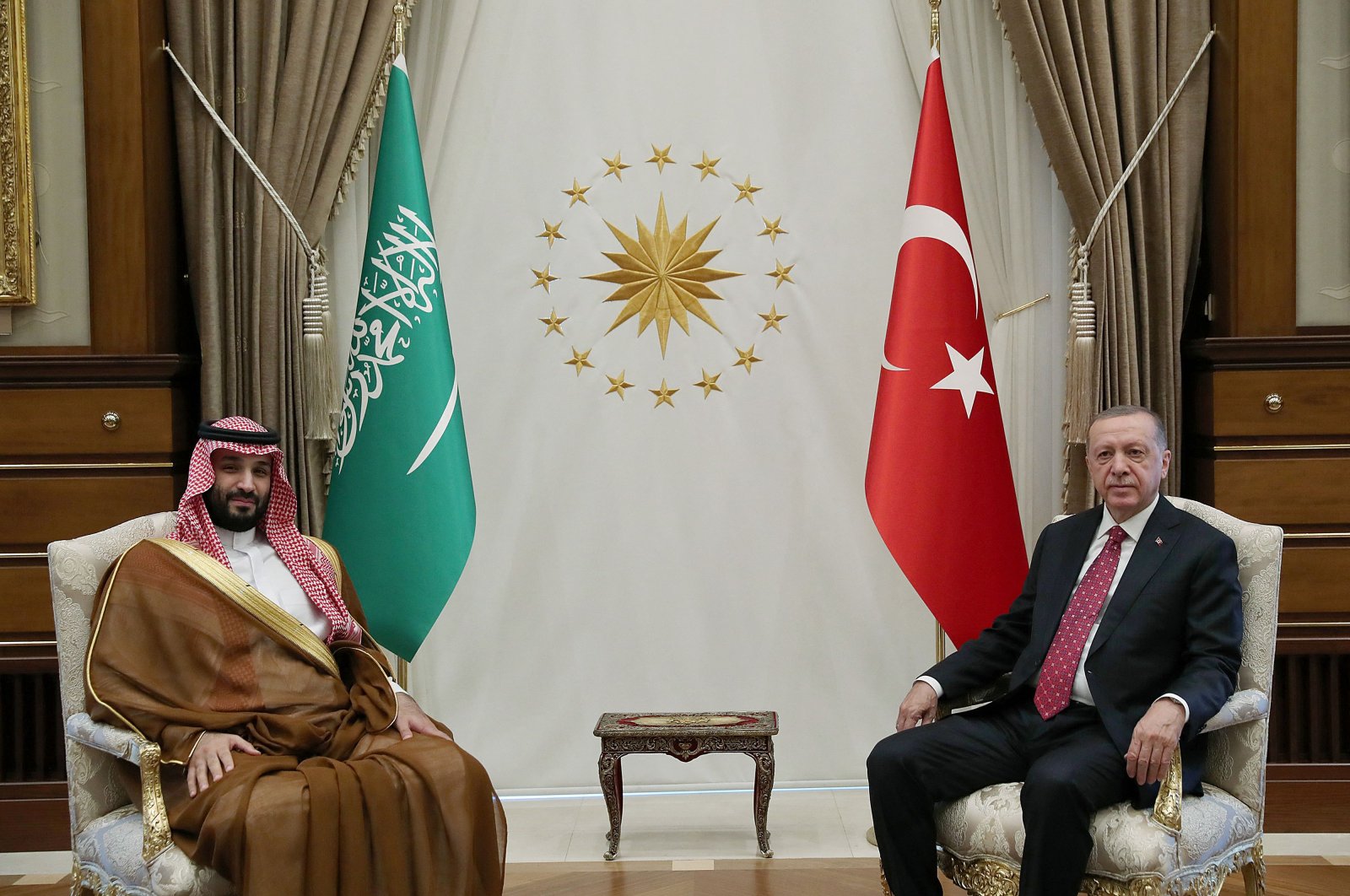 After a decade of broken ties, the bilateral relations between Turkey and Saudi Arabia are on track for normalization experts say, but they also warn that more is needed in the coming period to propel them to the next level.

Speaking to Daily Sabah, Ahmet Uysal, head of the Center for Middle Eastern Strategic Studies (ORSAM), said that bilateral relations between the two regional powers will return to their old track. “The ice was broken during (President Recep Tayyip) Erdoğan's visit to Saudi Arabia, and we can say that the ice melted during (Saudi Crown Prince) Mohammed bin Salman's recent visit to Turkey. The Jamal Khashoggi murder has ceased to be the subject of friction between the two countries, the boycott of Turkish products has been lifted, and the travel ban to Turkey has been lifted. After that, relations will proceed as normal," he said.

Uysal underlined that the competition in the Organisation of Islamic Cooperation (OIC) and over regional issues will ease amid cooperation. “I predict that we will see the reflections of this in a more positive way from Yemen to Syria and Libya. Of course, the relations will not reach the level of strategic partnership, but we can say that the relations have gained momentum and will continue like this.”

Ali Bakir, assistant professor and Turkey expert at Qatar University's Ibn Khaldon Center, also told Daily Sabah that things will take some time before the two countries take their relations to the next level.

"Currently, the focus seems more on overriding the causes that undermined their relations in the last few years and opening a new page or a new era that prompts them to strengthen their cooperation and coordination on matters of common interests. This means normalization is achieved, but more is needed in the coming period to go to the next levels. This remains to be seen of course."

Relations between Turkey and Saudi Arabia deteriorated in the past decade, but both countries are now seeking to revive ties. Saudi Crown Prince Mohammed bin Salman (MBS) visited Turkey for the first time in years last month for talks with Erdoğan as the two countries aim to normalize their relations following several tumultuous years.

According to a joint declaration, the leaders emphasized the countries' determination to start a new era of comprehensive cooperation in many areas. Ankara and Riyadh decided to deepen consultation and cooperation in regional issues to strengthen stability and peace.

The two leaders vowed to develop and maintain cooperation on the basis of the "historical brotherhood" of the two nations for the future of the region. They also highlighted the importance of increasing the number of flights between their two countries, easing bilateral trade and exploring investment opportunities.

Erdoğan in April visited the kingdom in the first high-level visit in years, which followed intense efforts in recent months to repair some diplomatic damage after a decade of tension.

Following his trip to Saudi Arabia that came upon Saudi King Salman’s invitation, Erdoğan said Ankara and Riyadh were striving to increase all kinds of political, military and economic relations to “start a new era.” He described the visit as “a manifestation of our common will to start a new era of cooperation as two brotherly countries.”

Before his trip this year, the last time Erdoğan visited Saudi Arabia was in 2017 when he tried to mediate a dispute pitting the kingdom and other Gulf countries against Qatar.

Ties between Ankara and Riyadh cratered after a Saudi hit squad killed and dismembered dissident journalist Khashoggi in 2018 at the kingdom's consulate in Istanbul.

Turkey had opened a trial in absentia against 26 Saudis suspected in Khashoggi's killing, but the court earlier this year ruled to halt the proceedings and transfer the case to Saudi Arabia, paving the way for the countries’ rapprochement.

Analyzing this recent process of normalization and rapprochement, one question that needs to be answered is: After a long period of tension between Turkey and Saudi Arabia, what were the factors that pushed the two countries to this process?

According to Bakir, there are general factors that are mostly related to the regional and international dynamics such as the defeat of former U.S. President Donald Trump, the Al-Ula agreement that paved way for Saudi Arabia and its Gulf allies to restore their ties with Turkey-ally Qatar, the COVID-19 pandemic, and the Russian war on Ukraine.

"And there are factors related to each country such as the will to further diversify their regional relations, diversify the economy, create and vitalize a strong local defense sector, and empower their regional influence through connectivity and creating a win-win situation rather than a zero-sum game," he further explained.

On the other hand, Uysal described Saudi Arabia as a country that has traditionally backed a status quo dependent on the West in the Middle East. According to him, there was a possibility of a more democratic and independent Middle East that emerged with the outbreak of the Arab Spring and this development worried Riyadh.

Although Turkey was not the country that provoked the Arab Spring, it supported the democracy and development of Arab societies, while Saudi Arabia spent energy and resources in the opposite direction, Uysal said and added that for this reason, the two countries' perspectives on regional politics diverged and tension with regional leadership increased.

“For example, while Saudi Arabia and other Gulf countries supported the coup in Egypt, Turkey opposed it. While Saudi Arabia supported the opposition against Bashar Assad and thus Iran in the first period of the Arab Spring in Syria, it withdrew its support together with (former U.S. President Barack) Obama and left Turkey alone. When Trump came to power, under the guidance of (his advisor Jared) Kushner, they were designing the new Middle East in cooperation with Israel, the United Arab Emirates (UAE) and Saudi Arabia, calling it the Deal of the Century.”

He said that the Khashoggi murder halted this process and the end of the Trump era led to the normalization of relations and added: “Turkey's economic problems and the pursuit of normalization by giving importance to regional cooperation, Saudi Arabia's cold treatment by (U.S. President Joe) Biden, the U.S. approach to Iran, the sudden exit from Afghanistan and the Yemen policy were also effective in opening up to Turkey."

Over the past year, Ankara has embarked on a diplomatic push to reset relations with regional powers such as Israel, Egypt, the UAE and Saudi Arabia after years of antagonism.

Erdoğan had reiterated that Turkey hopes to maximize its cooperation with Israel, Egypt and Gulf nations "on a win-win basis," at a time when Ankara intensified diplomacy to mend its fraught ties with these regional powers after years of tensions. The normalization process launched with Saudi Arabia and the UAE will make great contributions to both sides, Erdoğan said recently.

Saudi Arabia for its part has been trying to broaden its alliances at a time when relations between Riyadh and Washington are strained.

Regarding the possible reflections of the normalization process that Turkey started with Saudi Arabia on Ankara's relations with other regional countries and its sphere of influence as a regional power, Bakir said that several regional powers are closely monitoring the Saudi-Turkish normalization, such as Iran, Israel and the UAE, because a realignment between the two regional powers can shift balances and regional alliances in their favor in the region.

"Closer Saudi-Turkish relations mean a stronger Turkish influence in Iraq, Syria and the region. Likewise, it means a stronger Saudi Arabia in Yemen, the Gulf and Iraq. This kind of relationship between Turkey and Saudi Arabia is not only influenced by the bilateral dynamics but also by the behavior of the other rivals, competitors and enemies. In this sense, it will remain to be seen how the Turkish-Saudi relations will evolve," he said.

According to Uysal, since Saudi Arabia carries material and moral weight in the Arab world, the development of relations between the two countries will have a positive effect on the others. “It will encourage others to develop and maintain good relations with Turkey, especially since it is seen as a big brother in the Gulf region and has serious economic potential.”

“Since Turkey generally believes in regional cooperation and regional solutions to regional problems, seeing Saudi Arabia as a positive partner will reflect positively on many issues. Further progress will be made in terms of joint investments, security and military cooperation, and economic partnership," he underlined.