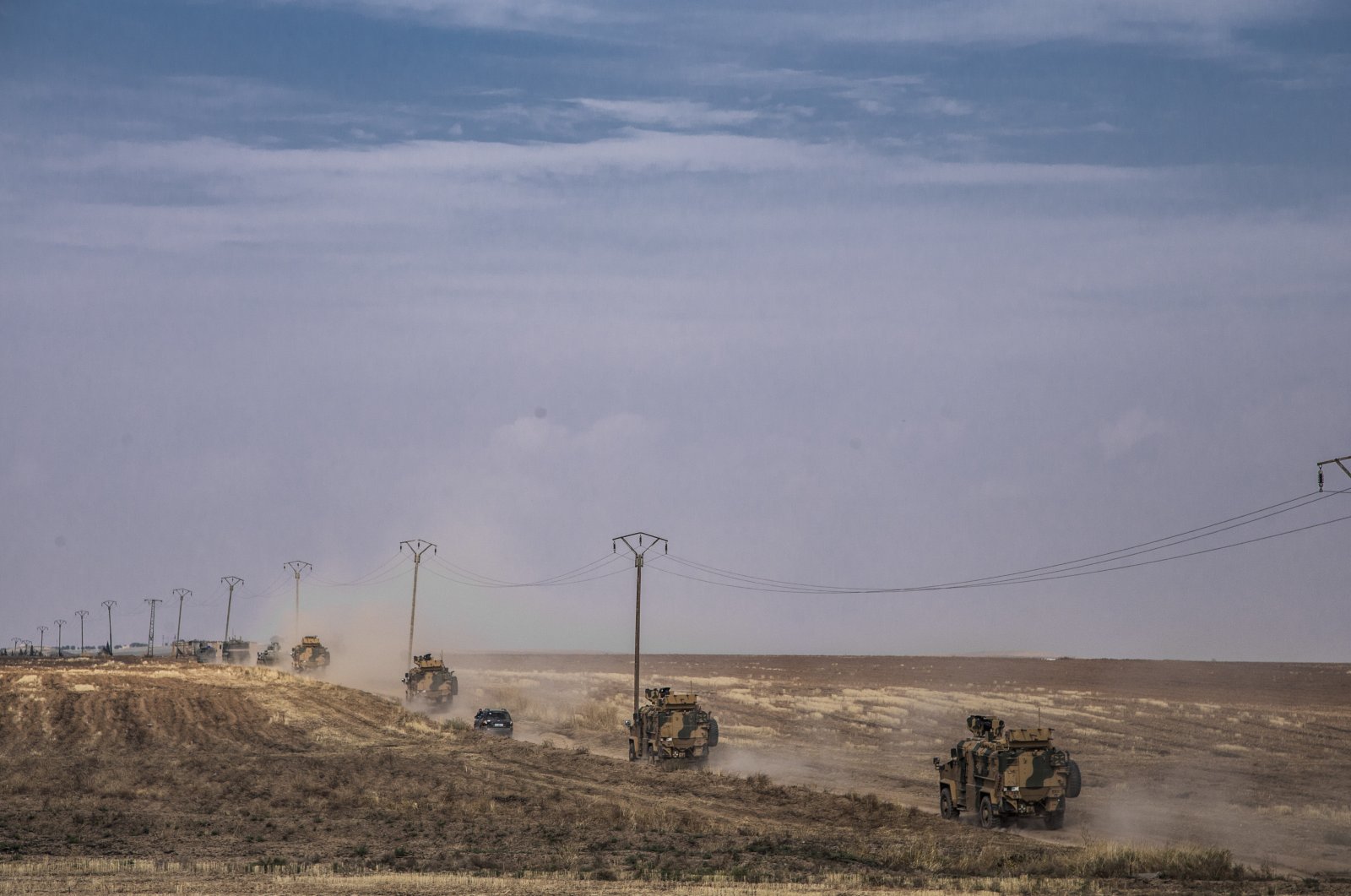 The steps taken by Russia last week in northern Syria have not escaped Turkey's attention.

First, there were reports that Russia was intensifying its military presence along the borderlines to the areas east of the Euphrates that are under the United States' control and where the PKK's Syrian branch, the YPG, is located.

Second, a delegation led by Ilham Ahmed, one of the ringleaders of the YPG, is to visit Moscow to hold talks, Kurdish media network Rudaw reported Monday.

The latest development indicates an increase in Russia’s military mobility in the Syrian field, especially recently, due to the possibility of a Turkish operation.

In fact, Russian military units have started patrolling the demarcation line between the areas controlled by the U.S.-led coalition forces and Russian forces in eastern Syria, Russian officials said Monday.

Russian forces had been replacing U.S. troops as they withdrew from some bases following the launch of Turkey's Operation Peace Spring on Oct. 9, 2019, against the YPG terrorists in northeastern Syria.

Since then, Russia has continuously intensified its military presence east of the Euphrates, including in the areas under YPG control, increasing the number of its military bases and posts.

There are currently 18 Russian military bases and posts in the areas under YPG control east of the Euphrates, namely in Hassakeh, Raqqa, Manbij and Ain al-Arab (Kobani) in Aleppo.

However, despite all this, Moscow has remained very reluctant to prevent YPG/PKK attacks on areas controlled by Turkey due to agreements with Ankara.

One of the prominent reasons behind Russia's show of strength in areas east of the Euphrates could be because it wants to send a message to Washington regarding the Ukraine issue. Washington's attempts to blockade the Kremlin through NATO, which has been closely monitoring the tension between Moscow and Kyiv recently, are also being carefully observed.

In other words, this brings to mind the possibility that Moscow may pursue a balance-of-power policy by increasing its military presence in the Middle East, especially in the face of tensions in the Black Sea.

In fact, it is not surprising from this point of view that Moscow on one hand is building its military fortifications, while on the other it is intensifying its political negotiations with representatives of the terrorist group in order to safeguard its interests in the Middle East, particularly Syria.

With these talks with the YPG/PKK, Russia also wants to keep the representatives of the terrorist group, which works closely with the U.S., on its side as well. But it would be a great lack of foresight on Moscow's part to assume that this game will not anger Turkey eventually, the other largest player in the region.

In this sense, the only difference between U.S. and Russia is that while the former admits to providing political support, the latter denies claims that it provides weapons to support the terrorist organization.

However, this claim will also be refuted. Because terrorist attacks on civilians in areas under the control of Turkish forces use advanced heavy weapons such as TOW missiles, Katyusha and Grad missiles and multi-barrel rocket launchers as well as U.S. and Russian-made rocket launchers and mortars.

Of course, it would not be difficult to guess that the most important topics on agenda are the relationship between the PKK terrorist organization and the Russian-backed Assad regime, and Turkey’s possible new operation in northern Syria.

Furthermore, at the end of these negotiations, Russia will also try to gauge whether the terrorist organization is closer and more loyal to Russia or the U.S.

Meanwhile, the U.S. and Europe continue to support the PKK and its offshoots, despite the PKK being designated as a terrorist organization by the U.S., Turkey and the European Union, though not by Russia.

If we recall, President Recep Tayyip Erdoğan remarks on his return from Sochi on Sept. 29, his last trip to Russia, he had said that he personally conveyed his discomfort with this policy of Moscow to his interlocutor, Russian President Vladimir Putin.

Erdoğan voiced his concerns regarding the YPG/PKK presence in Moscow and told Putin that the two countries need to further enhance cooperation in the fight against terrorism.

In light of all these developments, if Moscow continues its current policy of "we are not providing weapons to the PKK, but we will continue to work together, we do not consider it a terrorist organization," we will see its negative consequences for Turkey-Russia relations.

If Russia wants to settle accounts with the U.S. over the Black Sea – especially over the Ukraine issue – by aiding a terrorist organization already being supported by its rival, this strategy would be a missed shot.

More so, if Moscow wants to maintain its upper hand in the new geopolitical equation in the Caucasus, Africa and Eurasia, by aligning itself with Turkey, it should start by designating the PKK/YPG as a terrorist organization.

Thus, Moscow should abandon its old-fashioned policies of the 1990s of supporting the PKK. Otherwise, Russia may face negative consequences in the larger geography if it insists on using the extensions of the terrorist organization in Syria as leverage to achieve a balance of power with the U.S.

While it is obvious that Turkey and Russia maintain the principle of not treading on each other's toes in Africa and the Caucasus, which has turned into a win-win situation for everyone, Moscow's failure to account for these strategic losses due to prospective support to the terrorist organization and welcoming them in the capital would overshadow the sophisticated dimensions of its foreign policy.