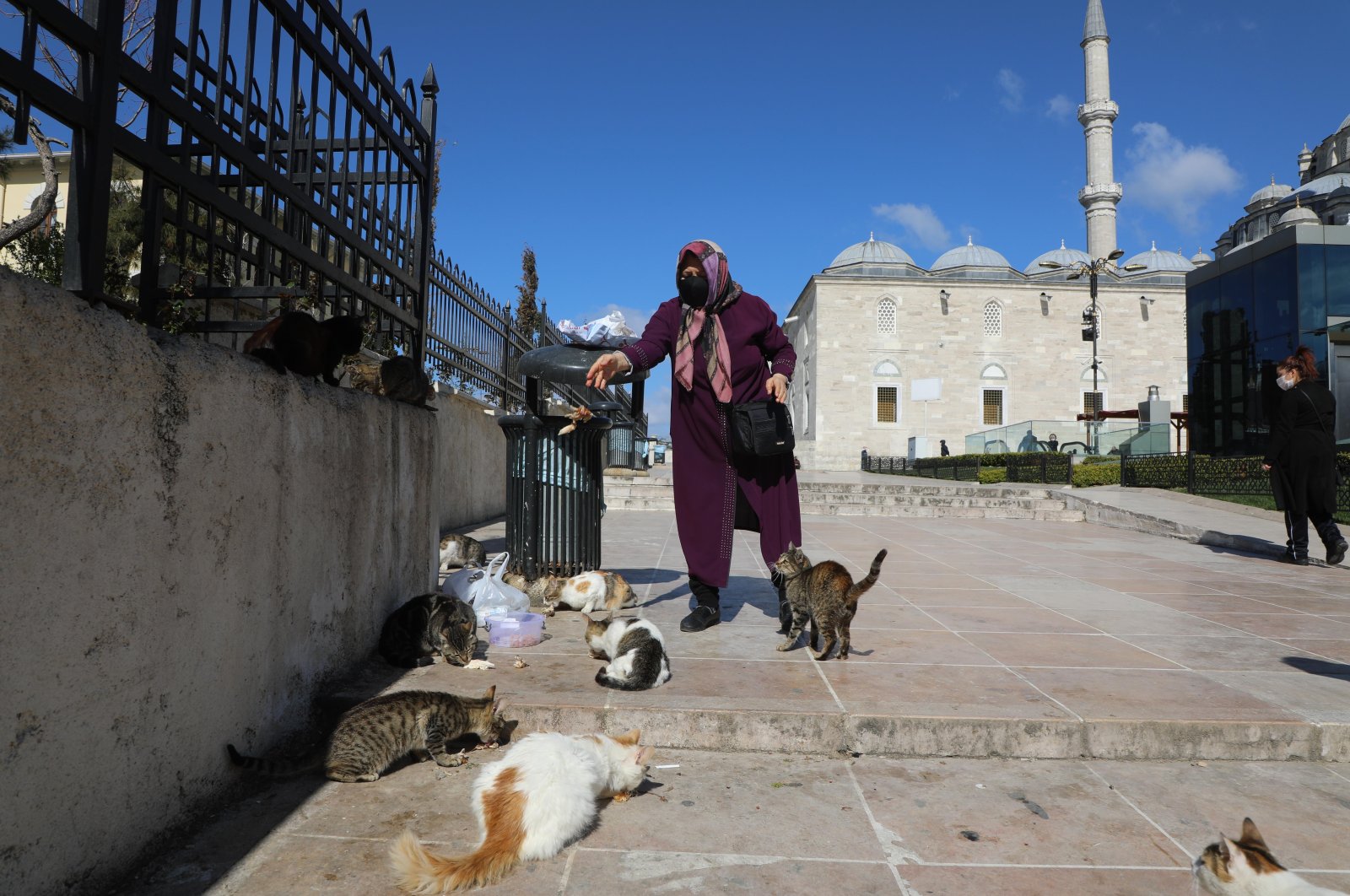 Rights are not given, they are taken. But the politicians, animal rights activists and animal lovers in Turkey agree that this is not the case for animals, who cannot speak up to defend their rights and their protection depends on the prerogative and mercy of others. There could be a light at the end of the tunnel as the country's political parties have put aside their differences and may soon enact a new law to tackle the country’s animal rights problem by revamping existing laws to impose stricter punishment for offenders. The law is up next on Parliament’s agenda following the budget debates, according to lawmakers.

“Our animal friends have inherent rights, like us, and their rights are currently being violated by us humans,” main opposition Republican People’s Party (CHP) Kahramanmaraş deputy Ali Öztunç told Daily Sabah, adding that it is necessary for all politicians to fight against the massacre, extinction, torture and maltreatment of animals, as well as their economic exploitation and the destruction of their habitats.

Highlighting that the draft has been prepared in cooperation with all political parties in the Turkish Parliament, the main opposition lawmaker noted that the most important feature of the law is the fact that it criminalizes violence against animals, replacing the treatment of animals like commodities rather than living beings.

“We need to recognize the rights of animals, ensure their rights are actively protected and identify the mechanisms that can be contacted during times of violations,” he said, adding that the draft is promising as it criminalizes violence against animals and proposes deterring punishment measures.

Meanwhile, the opposition politician called on Parliament Speaker Mustafa Şentop to bring the draft to the Parliament to vote it into law.

“Mr. Şentop, please, hear our calls and take action so we can enact this law with consensus,” he added.

The issue of animal rights has been on the agenda of the Turkish government in the past decade, as there has been immense public pressure from all circles of life on politicians to come up with a solution. Footage of torture and cruelty against animals has made headlines several times, outraging the public and animal rights organizations.

All political parties – including the ruling Justice and Development Party (AK Party), the main opposition Republican People’s Party (CHP), Nationalist Movement Party (MHP) and the Good Party (IP) – are working to update the country’s existing law, which has been criticized for lacking necessary measures to ensure the protection of animals.

“We could say that the draft law has united Turkish politics under a common cause,” Öztunç said, as he criticized the delay for enacting the law.

After over a decade of discussions, two drafts have been prepared by the Ministry of Environment and Urbanization and Parliament’s Animal Rights Research Commission, which will finally define animals as living beings instead of “commodities,” to allow tougher punishment and deter exploitation and violence.

By defining animals as living beings, the law will allow courts to treat crimes against animals on the same level as violence against humans, replacing the existing definition which sets offenders free with fines.

“The issue of animal rights is an extra-party matter. That is how it should be in the first place,” AK Party Istanbul deputy Rümeysa Kadak told Daily Sabah, adding that she was delighted to have witnessed this approach in her meetings with activists and politicians.

“Our political views are not even mentioned. This is a rather precious approach” Kadak said, adding that she wishes political parties could join forces more frequently on crucial extra-party matters.

Kadak, who is the youngest lawmaker in the Turkish Parliament, continued by saying that the widespread use of social media in the country greatly contributes to transparency with regard to the crimes committed against animals.

“Social media has allowed us to listen to countless numbers of animal lovers and listen to their views about the law. We need to take everyone’s opinion and carry out work to address existing criticism,” Kadak said.

On a different note, as the anticipated law involves the justice, forestry and urbanization ministries, it is crucial to set up a feasible mechanism to ensure that the Justice Ministry’s load is not overburdened, according to the AK Party lawmaker, who noted that it was necessary to carry out work in a sensitive and meticulous manner to not only make an efficient law but also to properly respond to the criticism of animal lovers.

Although Turkish people are historically known for their compassion and care for animals, incidents of torture and cruelty targeting strays and others and the lack of deterring punishment have outraged activists and animal lovers.

In January, a Turkish court handed down for the first time 10-year prison terms to three individuals who poisoned 13 stray dogs in the capital Ankara’s Batıkent district. But even then, the sentencing was based on the charges of “damaging a commodity” and “deliberate pollution of the environment,” in addition to a TL 15,000 (nearly $2,000) fine. The ruling was hailed as a victory, but activists like lawyer Ezgi Koç have repeatedly said the laws need to be amended to change animals being viewed as “commodity” to “living beings” and set a precedent for future cases.

While politicians sound upbeat about the new law, the president of Turkey’s largest animal rights organization seems pessimistic about the possibility of such a draft making it to the Turkish Parliament for debates due to several reasons.

“There is no law proposal on the agenda. They make it sound like there is, but that is not the case,” Ahmet Kemal Şenpolat, the president of the Animal Rights Federation in Turkey (HAYTAP), told Daily Sabah.

Worn out by the delay of the much-anticipated legislation, Şenpolat, a passionate lawyer-turned-activist, noted that there have been repeated efforts by politicians to make the new law in the past decade, but none of them have materialized.

He argued that parliamentary commissions are ineffective as their reports are not binding, and essentially, the law has been held off as a result of the pressure of lobby groups who make profits off animals, through dolphin parks, zoos and hunting.

He noted that politicians, regardless of their political affiliation, receive pressure if they dare to make radical changes that would affect some deep-rooted practices.

For instance, politicians in the Aegean region receive backlash if they plan to ban camel wrestling, as the ruthless sport’s supporters say they make a living off of it, or it is a tradition.

Determination and passion are crucial to passing the law, according to the federation president.

“I wish that whoever supports such a proposal takes the stage in the Parliament every single month and ensures that concrete action is being taken,” he said, adding that it would be a “surprise” for HAYTAP if the aforementioned law passed.

But Kadak, another ambitious animal lover who frequently visits shelters and is actively involved in promoting animal rights, says the time has come as there is consensus among politicians, the public and activists to pass the law.

Highlighting that she has received positive feedback about the commission report from animal lovers and activists, who are eagerly waiting for a law proposal in the General Assembly.

The young lawmaker expressed confidence that the proposal would make it right after the budget debates, which are expected to end on Dec. 18.

“And after that, we expect the animal rights law to be the first thing on our agenda,” she said.

Kadak’s prediction is in line with President Recep Tayyip Erdoğan’s recent comments about the issue, as he has recently been signaling that it was about time that politicians finally pass the law.

On Thursday, he told reporters in the Azerbaijani capital Baku that work is still ongoing and there is no “stepping back” from the law.

“It will most probably be passed after the budget,” he said. The president had also told the AK Party Deputy Group Chairperson Özlem Zengin to not delay the issue any longer after the latter made a presentation about the content of the draft at a party meeting back in November.

Meanwhile, although she fully supports a new and improved law, Kadak said Turkey’s existing laws are actually more civilized than the laws in many developed countries, where stray animals are "not given a chance to live."

“They collect and kill the animals and call it euthanasia, but in Turkey, streets are full of animals and the Turkish people and municipal administrations feed them and take care of them,” Kadak said. For instance, local authorities in Britain hold seized animals for up to seven days and may euthanize them, while in France, seized animals, whose owners are not found or are not adopted within a specific period, are killed. Other countries where animal euthanasia, a term Kadak says is the politer version of “killing,” include Sweden, Germany, Belgium and Spain.

“In Spain alone, some 30,000 animals are euthanized each year, and if they do not euthanize them, the animals die from hunger because feeding animals on the street is strictly prohibited,” Kadak said, as she criticized countries with similar measures for not taking care of the animals.

“We visit each and every one of the shelters in Turkey, and our animal lovers can also observe these places. They organize feeding sessions on the streets, while local administrations tend for sick animals and municipalities provide treatment and sterilization,” she said, adding that they now aim to install security cameras in all shelters and rehabilitation centers and set an example for countries in Europe.

In July, the Interior Ministry launched the Animal Situation Tracking (HAYDI) app as part of efforts to curb animal cruelty following a number of high profile cases that have stirred up public outrage in recent years.

The app is part of efforts that also include the establishment of environment, nature and animal protection directorates at branches of the Turkish National Police in 81 provinces. It helps the public immediately report any crimes.

Some of the features of the new law, which is expected to be called the Animal Rights Law and will replace the existing Animal Protection Law No. 5199, include a two-year prison term for maltreatment against animals, while it will make it mandatory for all pets to be tagged with a microchip for tracking purposes. Pet owners will also receive penalties of up to TL 10,000 if they abandon their pets on the street. Municipalities will be tasked with sterilization of all stray animals, while complaint offices will be set up by the local branches of the Agriculture Ministry to enable people to file complaints on animal cruelty and other related matters. Pet shops will also be affected by the new bill. They will only be allowed to sell animals online and will be required to keep them in their natural habitat until adopted.

The new law also oversees the establishment of an Animal Welfare Fund that will provide financial support to municipalities regularly for activities specific to animal rights and their protection. The municipalities will also dedicate 1% of their budget directly to animals, enabling the municipalities to increase the capabilities of animal shelters and other services.

Local administrations will also be obliged to establish animal shelters and rehabilitation centers. Municipal staff will receive specific training on the issue.