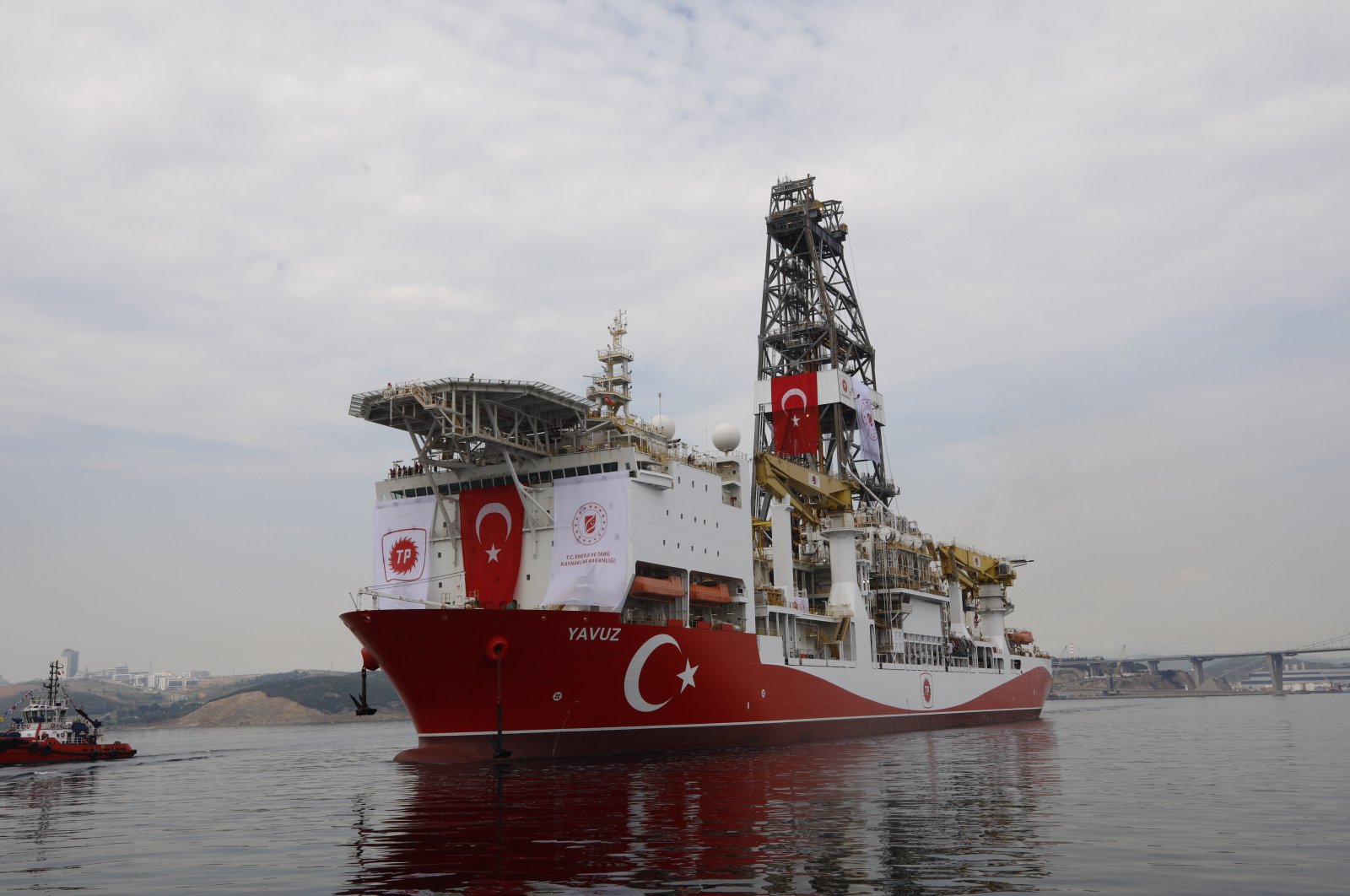 As Turkey has been stepping up to protect its rights in the region, it has witnessed a growing harsh stance by its neighbour Greece, which has been engaged in a traditional tactic of provoking Ankara and rallying the EU against it

Greece and Turkey, two NATO allies with a history of alternating periods of cooperation and conflicts, once again find themselves in the middle of bilateral tensions. Greece has recently adopted a harsh and denunciatory stance toward Turkey where old and new conflicts have merged.

The Cyprus issue, migration crisis, energy exploration activities in the Eastern Mediterranean, Libya and disputes over continental shelves in the Aegean are all sources of fear and concern for Greece which explains Athens’ rising hostility, experts say.

Recent examples of aggressive statements and acts from Greece toward Turkey are ample, with Athens speaking out last week against a proposal raised in Turkey to convert the Hagia Sophia into a mosque, reinforcing police patrols on its border with Turkey and claiming Turkish jets "harassed and stalked" a helicopter transporting the Greek defense minister and army chief last month.

Yet, at the core of the traditionally strained relations between neighboring Turkey and Greece which have taken a turn for the worse in recent months, lie the added burden of migration and an energy exploration race in the Eastern Mediterranean.

Last week, Greek Defense Minister Nikos Panagiotopoulos vowed a military response to Turkey when the latter announced that it would start to explore oil and gas in the Eastern Mediterranean soon. Upon this statement, Turkish defense minister Hulusi Akar responded "Let’s solve all rifts with good neighborly relations, mutual goodwill and by not violating others’ rights."

Energy and Natural Resources Minister Fatih Dönmez, meanwhile, confirmed that the national oil company, Turkish Petroleum (TPAO), which had applied for an exploration permit in the Eastern Mediterranean, would begin operations in areas under its license after the process was completed.

Experts say these statements by Greece are an attempt to win over allies and rally the EU against Turkey.

"In order to overcome its concerns and fears, Greece tries to win the EU, especially France and the U.S. from time to time to its side and to give Turkey messages, yet since Turkey is decisive in its acts, this tension continues," Nihat Ali Özcan, a senior security analyst at TOBB University told Daily Sabah.

"Since Athens knows it cannot act on its own, it uses a traditional tactic – provoking Turkey and complaining to other bigger powers that Turkey is engaged in a hostile approach toward Greece. Thereby Greece tries to involve other countries into the game and expand its front against Turkey. This is a policy Greece has used since the beginning, an example of this tactic’s success is that it had won over the EU," he added, indicating that the EU, however, is currently busy with other issues, including the global coronavirus pandemic and Brexit while there is no concrete consensus on the Eastern Mediterranean.

Ongoing developments in Libya will undoubtedly influence the balance of power in the region. With putschist Gen. Khalifa Haftar, backed by Russia, the United Arab Emirates (UAE), Egypt and France, losing ground by the day in Libya while the GNA is advancing, this front with Greece is collapsing, Caşın said.

"Negative approaches of some actors, who met on the common ground against Turkey, regarding its legitimate and legal steps in the Mediterranean were evaluated, and it is stated that protection of our country's rights and interests in land, sea and air will continue without any compromise," the country's National Security Council said accordingly last week.

The maritime pact, effective as of Dec. 8, 2019, asserted Turkey's rights in the region in the face of unilateral drilling by the Greek Cypriot administration, clarifying that the Turkish Republic of Northern Cyprus (TRNC) also has rights to the resources in the area.

Within this scope, Ankara has sent drilling vessels to the Eastern Mediterranean since last year, a move opposed by Athens and Greek Cypriots which have threatened to arrest the ships' crews and enlist EU leaders to join their criticism.

In 1974, following a Greece-backed coup aimed at the annexation of Cyprus, Ankara had to intervene as a guarantor power. In 1983, the TRNC was founded. Efforts for peace talks have repeatedly failed.

Provocation, a resort for Greece

Ankara has on every occasion vowed it wants to see energy as an incentive for political resolution on the island and peace in the wider Mediterranean basin, not a catalyst for further tensions. Yet, Greek Prime Minister Kyriakos Mitsotakis claimed Turkey neglects Greece’s maritime economic interests and thus resorts to provocation.

Caşın pointed out that one of the reasons of provocation was the fact that Greece struggled with internal problems and sought to blame Turkey in this regard. "Athens is trying to escalate tensions and put the blame of its failures on Turkey," the expert stressed giving the recent examples of a dispute of the Hagia Sophia, the hanging of a Byzantine flag on a mosque in the city of Larnaca in Greek Cyprus last week and the attacking of the Köprülü Hacı Ibrahim Ağa Mosque in Limassol city with Molotov cocktails by unidentified people the week before. He added that Greece did not give up on the so-called "Megali Idea," namely the idea of a Greater Greece and Hellenism.

"Greece struggles economically in its internal affairs together with the impact of the coronavirus pandemic, its energy projects in the Eastern Mediterranean have collapsed, the decrease of oil prices to $26 also has affected Greece as well as the EU abandoning its Eastern Mediterranean gas project of $20 billion,” Caşın said.

Through a parliamentary motion in 1995, Turkey declared unilateral action by arguing that, if Greece were to extend the boundary to 12 nautical miles, it would be considered a casus belli.Greece, on the other hand, claims that the islands also have their own exclusive economic zones and with this claim, it reduces Turkey's zone remarkably while twisting what the international law states.

On the other side, Caşın also indicated that the Seville Map prepared by Greece was eliminated with the agreement between Turkey and Libya. Saying that the plan of this map has collapsed, the law expert underlined that it had no validity regarding the U.N. principles and was in violation of Article 59 of the Equitable Principles of Maritime Boundary Delimitation.

The agreement between Turkey and Libya determined the sovereignty area based on international law as 186,000 square kilometers (71,815 square miles). Thus, the possibility of making an exclusive economic zone agreement between Greece and Egypt, and Greece and Southern Cyprus, was eliminated. The draft of the anticipated deal between the aforementioned parties is known as the "Seville map." This map restricted Turkey’s Mediterranean sovereignty area to 41,000 square kilometers and restrained Turkey to the shoreline.

Caşın further pointed out that this map restricted also the area of Libya and of Israel, which has caused the country to withdraw its support to this plan.

Regarding the possibility of escalation of bilateral tensions after Greece’s statements of military response, Caşın said that war is almost out of question. "War has to be legitimate," he said, "The Libya deal has legal grounds, if Greece has a legal claim, it has to solve the issue through the U.N.’s peace through consensus policy and bilateral dialogue."

"In terms of military, strategy and economic power, Greece is in no situation to fight with Turkey," Caşın added, saying that the Greek people had no hostility toward Turkey and that this was simply a political act.

While Tsipras was recommending dialogue with Turkey, Apostolakis similarly this week said in the case of conflict with Turkey, Greece will be alone. Apostolakis said this resulted from the fact that Egypt and Israel do not want to completely close the window of future cooperation with Turkey.

"While trying to isolate Turkey, Greece has been isolated and is now in the desperation of this isolation," Caşın explained, saying the acts and statements against Turkey are nothing to be taken seriously.

Özcan pointed out that Greece was naturally concerned with the developments in the Eastern Mediterranean in the past year and Turkey’s assertive activities. He said Turkey should expose Athens' strategy of pointing toward Turkey as the aggressive power in the region.

Ulterior motives could also be among the reasons for Greece’s increasing hostile acts, said Caşın. "Some countries could be abetting Greece to endanger the southern flank of NATO by pitting Ankara and Athens against each other," he said, apparently pointing to Russia.