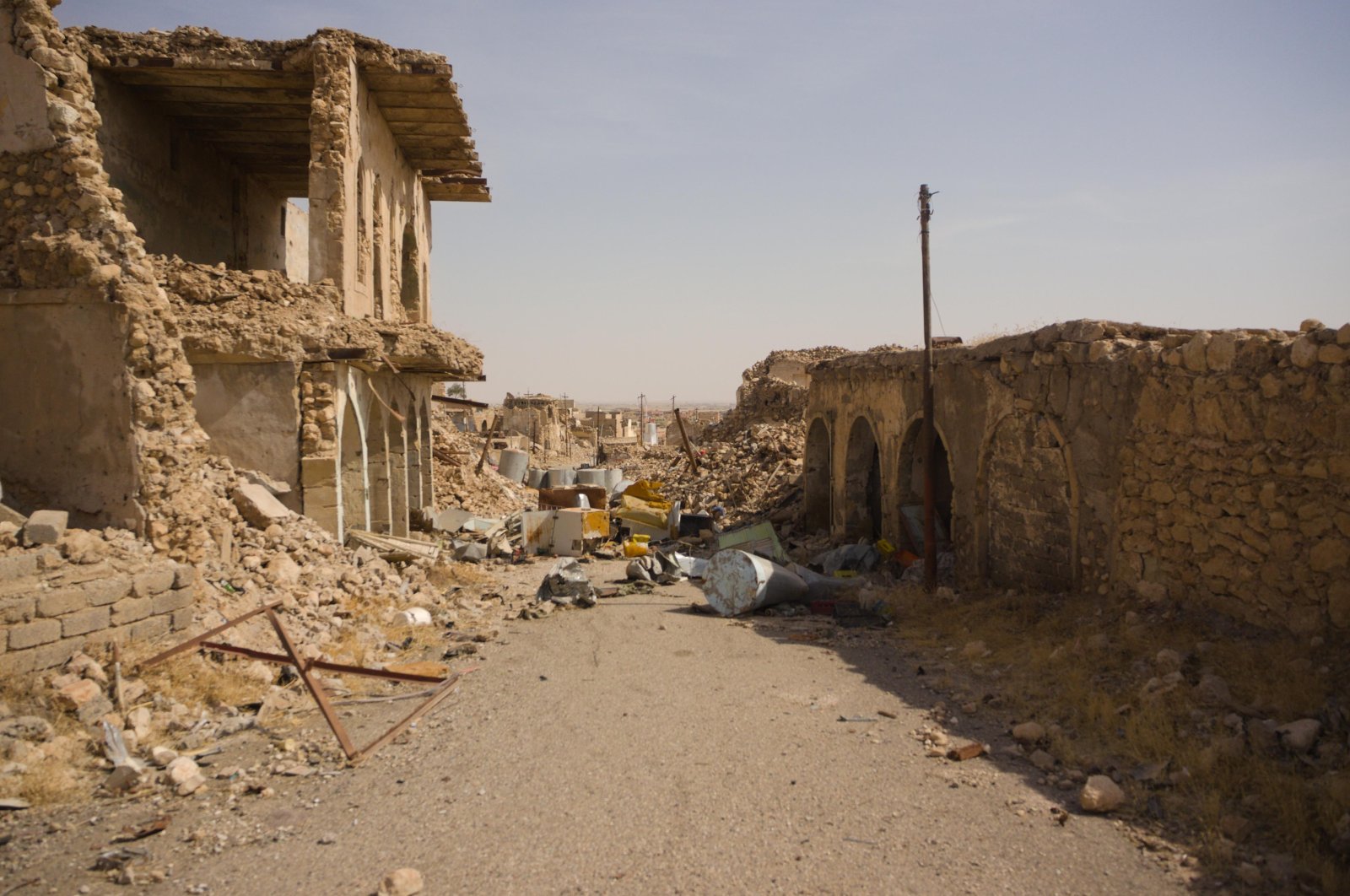 Welcomed positively by the U.N. and Turkey, the Sinjar region is expected to normalize after being wracked by terrorism for years as Ankara separately pursues its counterterrorism operations

Baghdad and Irbil on Oct. 9 unveiled what they called a “historic” agreement aimed at solving all security, governance and service provision issues in Iraq's northern Sinjar region, an area which armed groups compete for that saw most of its population displaced due to the strong presence of terrorism. An official stated that the agreement will normalize the region, while an expert pointed to the fact that the deal will help ease the friction between Turkey and Iraq, namely the presence of PKK elements in the region.

“This agreement is highly significant and is expected to normalize the situation in the Sinjar region,” State Minister of the Kurdistan Regional Government (KRG) Aydın Marouf told Daily Sabah, underlining that it is also a positive milestone for bilateral cooperation between Irbil and Baghdad.

In the normalization process, security arrangements will be implemented in line with the deal such as booting out armed groups, including the PKK terrorist organization, its affiliates and Iran-backed militias. Through the establishment of security and the removal of armed groups, it is expected that the displaced Yazidi community, which suffered genocidal attacks by Daesh when the group took control of significant swathes of the region, can finally return.

“When Daesh occupied the region, the Yazidis had to live under oppression and were subjected to forced displacement. The hundreds of thousands displaced Yazidis could also not return after Daesh left the region because the void was filled in by other illegal armed groups,” Marouf explained, stressing that the Yazidis reject the PKK presence as the group hinders their return.

Daesh slaughtered more than 3,000 Yazidis, enslaved 7,000 women and girls and displaced most of its 550,000-strong community from their ancestral home Sinjar.

Since Daesh was driven out of Sinjar, a majority-Yazidi district on Iraq’s northwestern border with Syria in 2015, the town and its surrounding areas are controlled by a patchwork of armed groups.

The PKK terrorist group managed to establish a foothold in Sinjar in mid-2014 on the pretext that it was protecting the local Yazidi community from Daesh. Since then, the PKK has reportedly established a new base in the area for its logistical and command-and-control activities besides their main headquarters in the Qandil mountains in northern Iraq.

“A strong terrorism structure existed both during the rule of Daesh and later in the region – a structure that was out of the control of the central government. The PKK reached a new level in Sinjar as an administration dominated by the terror group and its affiliates emerged here,” Bilgay Duman, coordinator of Iraq Studies at the Center For Middle Eastern Studies (ORSAM), told Daily Sabah, adding that Sinjar’s chosen district governor could not even enter the region due to the strong PKK presence.

He said that due to the state’s weak position in Sinjar, the agreement would also mean the reestablishment of Iraq’s sovereignty in the region.

Under the plan for Sinjar, Baghdad and Irbil would choose a new mayor and appoint administrators.

Marouf underlined that the administration currently led by illegal groups is a situation that neither Irbil or Baghdad accept.

“The deal also shows that the Iraqi central government has started to perceive the PKK as a threat and terrorist organization,” Duman pointed out.

The Iraqi central government and the KRG have deployed some 6,000 security forces near the Sinjar area, in a blow to the PKK and the Hashd al-Shaabi (Popular Mobilization), an Iraqi paramilitary network dominated by Iran-backed factions, according to reports last week.

Mosul Governor Najim al-Jubouri noted that Special Representative of the Secretary-General for the United Nations Assistance Mission for Iraq (UNAMI) Jeanine Hennis-Plasschaert has expressed to the government strong support for the implementation of the Sinjar deal.

“The fact that the implementation of the deal takes place under the auspices of the U.N. is highly important. Hereby, the removal of the PKK presence in the area, as well as the reestablishment of the Iraqi government’s sovereignty, comes under international responsibility,” Duman added, saying that this shows the PKK is perceived as an illegal, international terrorist body.

Duman said that while the inking of the agreement and the first steps were essential, it still remains to be seen if the deal can be fully carried out.

“A problem is that the definition of illegal armed groups is not specified clearly,” the expert stated, indicating that apart from the PKK, the central government has serious problems with Iran-backed militia Hashd al-Shaabi.

Similarly, the conflict intensified between the PKK and the Peshmerga recently. Earlier this month a Peshmerga fighter was killed and two others were wounded when an explosive device planted by PKK terrorists was detonated north of Duhok province on the Turkish border. Following the attack that was strongly condemned by the Iraqi central government, Masoud Barzani, former president of the KRG, called to prevent the PKK from imposing its will on the region.

Saying that the agreement is also vital for Turkey, Duman reminded that Ankara had been pressuring the Iraqi central government to remove the PKK presence from the region and that it clearly voiced it could extend its military operations if Sinjar turns into the second Qandil.

The Turkish Armed Forces (TSK) regularly conduct cross-border operations in northern Iraq, a region where PKK terrorists have bases from which they carry out attacks on Turkey.

Following the announcement of the deal, the Turkish Foreign Ministry said in a statement that it hoped the agreement would enable the reinstatement of Iraqi authorities' control in Sinjar and eradicate Daesh and PKK terrorist organizations in the region as well as their offshoots. The ministry also hopes the deal will ensure the safe return of the Yazidi community and other people displaced from the region who have been subjected to grave oppression and persecution, first at the hands of Daesh and then the PKK.

Security sources told Daily Sabah last week that Turkey’s operations would continue separately from the ongoing developments in the region.

Though not ruling out the possibility, Marouf stated cooperating with Turkey to remove armed factions was not on the table right now, stressing that the agreement is between Irbil and Baghdad.

“If the agreement can be widely implemented, it would remove a significant obstacle in the advancement of relations between Turkey and Iraq,” Duman stated, adding that the agreement is also an indicator of Turkey’s strong will.

The expert also touched upon the U.S.’ role in the implementation of the agreement stating that Turkey and the Iraqi central government had previously cooperated in clearing the Sinjar region of terrorists, but their efforts were hindered by Washington.

“We know that the U.S. has a significant presence in the region and uses the Sinjar line as a logistical center for supporting PKK affiliations in Syria,” Duman said.

The U.S. primarily partnered with the PKK’s Syrian affiliate, the YPG, in northeastern Syria in the fight against Daesh while Turkey strongly opposed the terrorist group's presence in northern Syria – a major sticking point in strained Turkey-U.S. relations. Ankara has long objected to the U.S.' support of the YPG, a group that poses a threat to Turkey and terrorizes local people, destroying their homes and forcing them to flee.