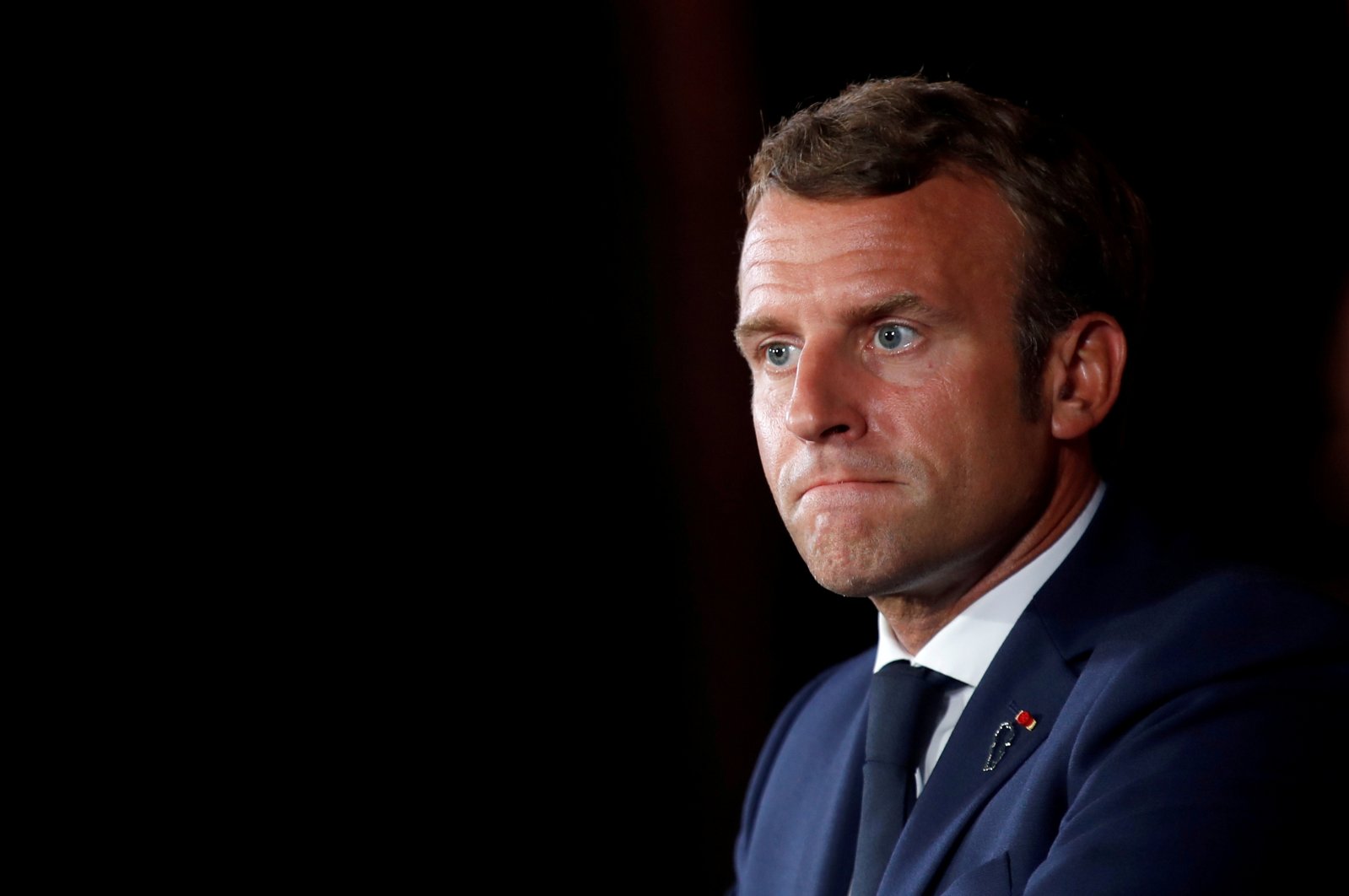 French President Emmanuel Macron looks on as he attends a news conference at the Pine Residence, the official residence of the French ambassador to Lebanon, in Beirut, Lebanon September 1, 2020. (REUTERS Photo)
by Nur Özkan Erbay Sep 17, 2020 12:20 pm
RECOMMENDED

On Tuesday, May 4, 1982, Argentina’s two Super Etendard fighter jets fired Exocet missiles on British warships heading to the Falkland Islands. One of the missiles missed its target, but the other hit the HMS Sheffield – one of Britain's most important destroyers. The missile struck the center of the ship, succeeding in sinking the vessel. This attack lent the impression that Argentina had gained ground against the British, but this was not the case. So, what changed the course of the war the U.K. won? Argentina’s fate regarding the outcome of the war changed after France gave the technical specifications and radar codes of the French-made Exocet missiles used by the Argentinians to the British. The Falkland Islands were 12,000 kilometers (approximately 7,400 miles) from France, while they were only 1,500 kilometers away from Argentina.

Some 38 years have passed. Today, France is summoning the same spirit in distant geography – though not as far as the Falkland Islands – in the Eastern Mediterranean, of which it does not border. French President Emmanuel Macron’s policy of imitating French colonialism and his attempts to conceal interior problems with small victories in foreign affairs can be seen in Lebanon, Iraq, North Africa, Libya and now in the Eastern Mediterranean. While Macron solidifies France’s oil and construction investments in Iraq and Syria, he also attempted, like a vulture, to engage deep-rooted imperialism that still lingers in Lebanon following the blast in the Port of Beirut. Macron, who cooperates with putschists in Libya and Egypt, now is busy arming Greece against Turkey.

Macron's policies, which recently made use of the motto “Pax Mediterranea” ("Mediterranean Peace"), target Turkey openly and not only affect bilateral relations but also the Turkish-Greek tension.

Clearly, France’s efforts are designed to form a de facto attack block against Turkey in Libya and in the Eastern Mediterranean by organizing Greece, the Greek Cypriot administration, the United Arab Emirates (UAE) and Egypt. France explicitly uses these countries as a deterrent against Turkey in an effort to force Ankara to give up on its rights despite international agreements and legitimate deals.

While saying “Pax Mediterranea” on one side, Macron is provoking Greece, a NATO ally, against Turkey and non-NATO countries such as the Greek Cypriot administration, Egypt and the UAE.

However, Macron’s efforts are highly understandable because France continues to struggle with domestic policies. Macron has introduced a $100 billion rescue fund for his economy on the brink of collapsing and which is expected to shrink by 11%. Therefore, Macron has to create resources. Thus, it could be considered normal that France is selling Greece billions of dollars worth of weapons, vessels and helicopters as the tension in the Eastern Mediterranean peaks.

However, Macron’s maximizing policies both in internal and external affairs might lead to greater social unrest and economic crises. Paris’ actions in violation of NATO practices despite being a NATO member might lead to France receiving warning calls from the European Union, the U.S. and NATO in the upcoming period.

President Recep Tayyip Erdoğan must feel that France might let down Greece just as it did to Argentina in the Falkland Islands 38 years ago. Erdoğan in one of his recent speeches instructed Greece not to follow French policy: “Do not take these paths. You will be left all alone.” He added that Greece should “demonstrate good neighborly behavior. Fortunately, we make our own decisions. Turkey can fight, if necessary.”

According to the French Institute of Public Opinion (IFOP), a polling institute, support for Macron has continued to decrease in September and is only around 39%. Macron’s political rebukes and steps could be summarized as a stance saying, “Look at how I stand up against Turkey.” The moves could also be interpreted as a remedy for the frustration he has been experiencing in internal and foreign affairs for the past three years. They are not realistic and do not provide an advantage for France. They are not rational. Yet, despite everything, it would not be far off to predict Macron, motivated by crises, could take new steps against Turkey until the 2020 French general elections.

Ankara continues to be willing to repair the deteriorating bilateral relations with Paris, but the same cannot be said for Macron. Macron’s statements targeting Turkey directly through Erdoğan have caused a widespread reaction in Turkey, ranging from the ruling party to the opposition as well as various political and social circles. Erdoğan has also been highly decisive on the matter. The upcoming moves of the president, who said, “You will have more problems with me,” are awaited with curiosity.