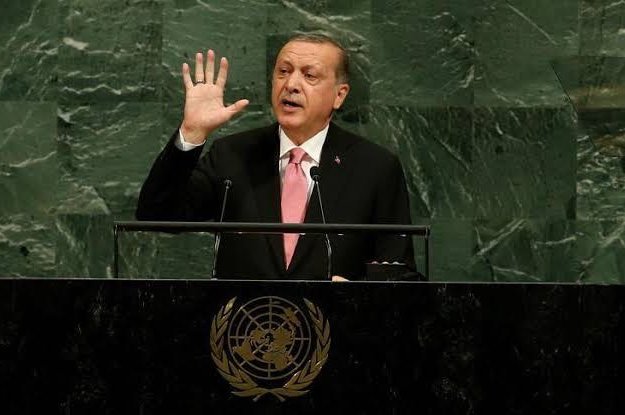 In 2013, Turkey’s then-Prime Minister Recep Tayyip Erdoğan was declaring his manifesto of “The world is bigger than five” for the first time. Erdoğan was underlining that the five permanent representatives of the U.N. Security Council (UNSC) – the U.K., France, China, Russia and the U.S. – could not decide on the world’s problems, the humanitarian tragedies, wars and conflicts unilaterally and on their own. He noted how this dysfunctional system was dragging the world into deadlock.

That year was only the second in the Syrian civil war in which 7 million Syrians have had to leave their homes. Five million were internally displaced people in 2013, while 500,000 came to Turkey. The support given by other countries to support the Syrians in Turkey at the time was only $135 million. Over the next seven years, the number of Syrian refugees in Turkey reached 4 million. The few steps the international system has since taken only exacerbated the war in Syria, let alone the five UNSC members finding any type of solution to end it.

Today, the world seems to be concerned about its own problems and not about the humanitarian, political, economical, global and regional effects of civil war in that country. This time the five UNSC members, claiming to be the post-World War II international system’s main global actors, struggle to save their own citizens from the coronavirus.

During the online G-20 summit held last week, Erdoğan reminded leaders of the world’s biggest economies that the global pandemic could only be overcome with solidarity, just as he said that the world is bigger than five six years ago.

Just as in the Syrian war and other conflict areas, however, these five countries are unable to run their state for their own citizens, let alone help other countries in the fight against the coronavirus pandemic.

The U.K., one of the two European countries in the UNSC but also the one that does not prefer to be in the same economic and political union with the rest of Europe, does not support any other country in the fight against the coronavirus.

The fact that Hungary openly stated that it received aid from the Turkic Council and China rather than the EU in the fight against COVID-19, clearly shows how fragile the humanitarian union has become in the face of natural disasters and a pandemic, apart from its economic and political cooperation.

Italy, which has become the epicenter of the coronavirus in Europe, is asking for respirators from Germany, yet the other EU member rejects its request. Therefore, it is no surprise that Russia, not an EU country, sends 22 convoys of military expert teams to Italy to help.

The UNSC representatives in the east, China and Russia, who spend all their resources trying to obtain the political and economical leadership from the U.S. and the Western union, are no different in terms of their nationalistic cultures. China's failure to report the virus's spread from the country clearly shows which outcomes it prioritizes.

What about the U.S., which has become the world's hegemonic power? While it was, up until recently, building walls on its borders, it is so desperate now that it opens its doors unconditionally to health care workers and experts to treat the coronavirus disease. U.S. President Donald Trump cannot even manage to make himself listen to private companies about the production of respirators. Test kits are sold to U.S. citizens for $1,500. While Trump is boasting that the U.S. is the world’s biggest exporter of medical equipment, New York's mayor is warning that the city’s medical supplies could run out within a week.

Watching these somber pictures unfolding inside the five UNSC member nations, the rest of the U.N.'s 188 countries try to fight the pandemic on their own with all that they have, while still struggling to relieve the wounds of other countries and people.

China did not tell the world about the virus and in terms of its global solidarity, cannot go beyond selling test kits. The World Health Organization (WHO) made the pandemic announcement late. Europe did not close its borders soon enough. The U.K. endangered its people by following herd mentality. France is the nation that left its people to die, saying there was no place in its hospitals, and it is where Louis Vuitton, instead of the state, is producing safety masks. Russia tries to find an opportunity in every crisis, and the U.S. sells its people virus test kits for profit.

Looking at the destruction caused by the coronavirus disease and the situations in France, the U.K., Russia, China and the U.S., the statements of the UNSC members and other international authorities, do not mean anything to the billions of people in the world anymore.

Maybe this is why former U.K. Prime Minister Gordon Brown urged world leaders to create a temporary form of global government, kind of a task force to deal with the coronavirus crisis.

Listing all these blunders together, we see that a half century of this system collapses. The world today questions whether the definition of power that has existed since 1945 has transformed. In fact, the axis-hegemonic country, powerful-weak state categorization has become relative and dysfunctional.

The prerogative of the current international system has failed in the face of the coronavirus crisis, and this experience has shown the world that it is, in fact, bigger than five.