Turkey-Iran tensions on rise ahead of possible Sinjar operation 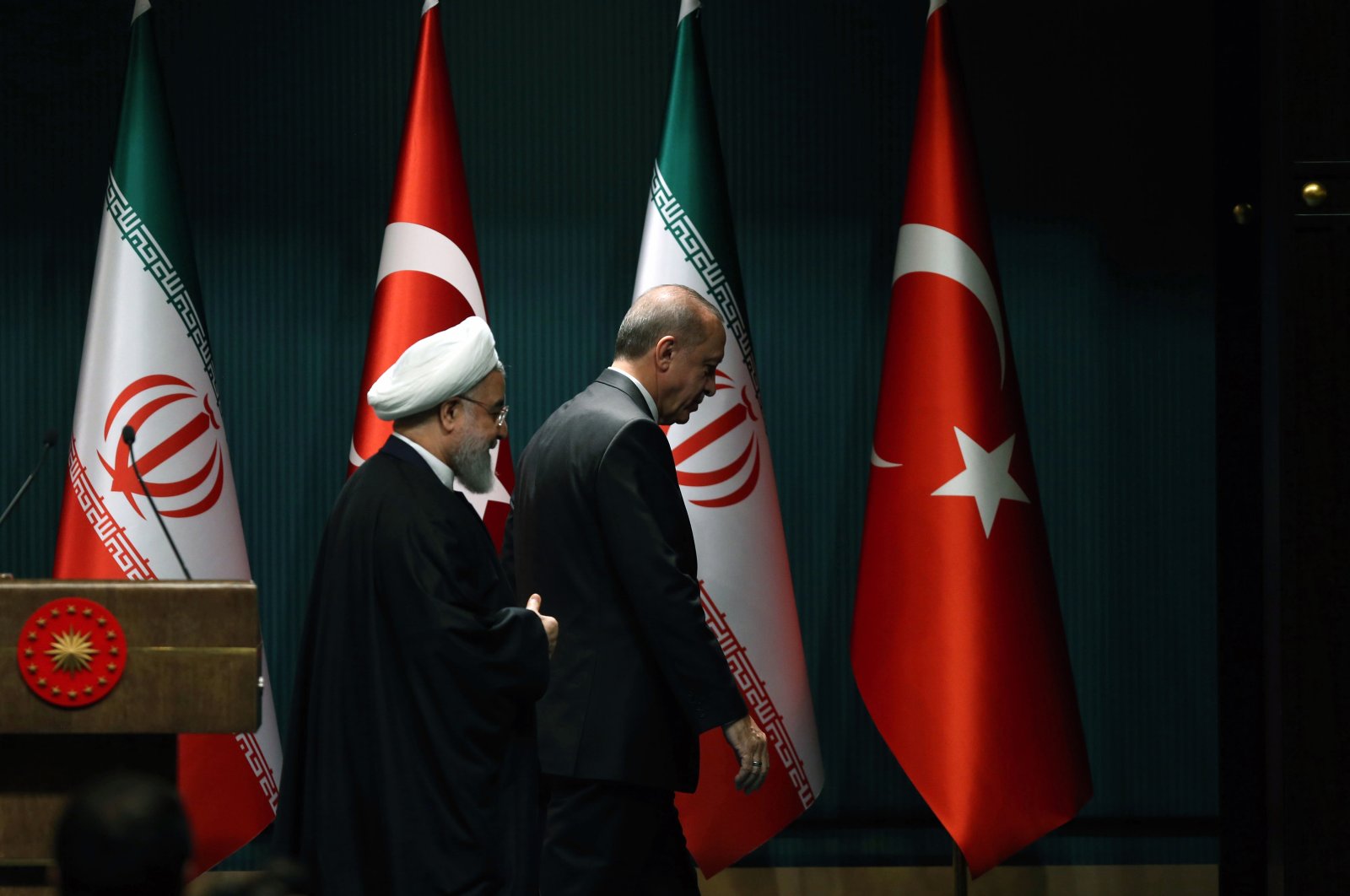 Following a veiled warning from Turkey that it could enter Sinjar 'all of a sudden,' Iranian authorities’ statements to Ankara have escalated a rumbling row parallel to repeated threats made by pro-Iran groups against Turkey

Tensions between Ankara and Tehran have been running high lately with increasing diplomatic sparring coinciding with Iran-backed militias issuing statements threatening Turkey and boosting their presence ahead of a possible Turkish operation into Iraq’s northern Sinjar region to eradicate the PKK’s presence.

“Iran has clearly expressed its opposition to any possible Turkish military operation in the Sinjar region and has stated its objection in several ways and means. Meanwhile, in recent days we have witnessed an escalation in the positions of most Iraqi militias and figures associated with Iran against Turkey,” Watheq Al-Sadoon, an expert on Iraqi studies at the Ankara-based Center for Strategic Studies in the Middle East (ORSAM), told Daily Sabah.

Turkey has been closely following the developments in Sinjar, stressing that it will not tolerate threats posed to its national security and would not hesitate to take the necessary steps to eliminate the terrorists. Coinciding with Ankara signaling a possible operation in the region, Iran-backed militias have been repositioning themselves while Iranian officials have engaged in a row with Turkey over its presence in Iraq.

“Certainly, Iran will not be pleased by a Turkish operation in Sinjar and will show its reaction through militias, however, as a result of Turkey’s decisive stance, Tehran will accept the outcome of such an operation,” Hakkı Uygur, the deputy chair of the Center for Iranian Studies (IRAM), said while speaking to Daily Sabah.

Another Iran-backed paramilitary group in Iraq, Harakat Hezbollah al-Nujaba, threatened to attack the Turkish military if it continues to carry out counterterrorism operations in northern Iraq two weeks ago. The group, designated as a terrorist organization by the U.S., receiving military assistance, training and advice from Iran and part of the Hashd al-Shaabi (Popular Mobilization Forces – PMF), warned the Turkish military and the government to revise their plans.

On the other side, last week, an Iraqi official announced that the PKK and Hashd al-Shaabi forces, an umbrella group of mostly Iran-backed militias, have been increasing their presence in Sinjar. Sheikh Shamo, who advises the head of the Kurdistan Regional Government (KRG) about Yazidi affairs, said 15,000 members of the Hashd al-Shaabi militia were deployed in Sinjar.

The PKK terrorist group managed to establish a foothold in Sinjar in mid-2014 on the pretext that it was protecting the local ethnic Yazidi community from Daesh. Since then, the PKK has reportedly established a new base in the area for its logistical and command-and-control activities besides their main headquarters in the Qandil Mountains in northern Iraq, capitalizing on Iraq’s internal divisions.

Sinjar is wedged between Turkey to the north and Syria to the west, making it a highly strategic zone long coveted by both the central government in Baghdad and the KRG in the north.

Apart from Turkey, the KRG is also irked by the presence of the PKK in the area.

Speaking about the PKK presence in the region, last Saturday KRG Prime Minister Masrour Barzani said in an interview with France24 that: "The PKK, unfortunately, has taken advantage of our government's goodwill and occupied land. We hope this won't escalate and that the PKK will realize their military presence here will definitely not be tolerated by us."

In an attempt to eliminate the PKK terrorists in the region, the governments of Irbil and Baghdad recently signed a deal. The Sinjar deal, inked under the auspices of the United Nations on the status of the region, seeks to clear the region of PKK terrorists and is also highly supported by Ankara.

On Jan. 22, President Recep Tayyip Erdoğan stated that Turkey may conduct a joint counterterrorism operation with Iraq to clear PKK terrorists out of the Sinjar region.

"We may come there overnight, all of a sudden," Erdoğan added, using a famous phrase he said.

Erdoğan’s words came a week after Defense Minister Hulusi Akar visited Iraq to hold a series of meetings with top Iraqi officials and said Turkey was ready to provide assistance to the Baghdad and Irbil administrations to rid the region of the PKK's presence.

Al-Sadoon underlined that Iran and Iraqi Shiite militias care about Sinjar and the vicinity of Nineveh province because they “represent an important transportation station on the Iran-Iraq-Syria-Lebanon route.” He explained that though another strategic way for Iran to reach Syria and Lebanon via Iraqi territory exists, it is located in Anbar Province, where most of its residents are Sunni Arabs that are hard to control, unlike the people of Nineveh.

According to Al-Sadoon, the PKK and Iran-backed militias in Iraq may unite against Turkey’s operation in the region.

Al-Sadoon explained that the main reasons behind the rapprochement between the PKK and Iran-backed militias are to implement Iranian regional policies, a common hostility toward Turkey for sectarian reasons, financial gains from illegal trade and threatening the authorities of the KRG.

Regarding Iranian regional policies, Al-Sadoon reiterated that Tehran uses the militia in the area to display its rejection toward the U.S.' presence, attacking U.S. positions. “So, we can expect Iran to repeat the same approach with a potential Turkish military operation in Sinjar by moving its Iraqi Shiite militias to threaten Turkish forces and interests.”

Iran must respect fight against terror

Saying that Tehran has recently been taking intentional or unintentional steps that fray amicable relations between Turkey and Iran, Uygur highlighted that Turkey’s disappointment with Iran is not without reason.

Turkey and Iran summoned each other's ambassadors last week, sparring that comes shortly after PKK terrorists executed 13 Turkish citizens in a cave in northern Iraq after abducting them, shooting most of them in the head.

The incident prompted the Iranian envoy to Baghdad Iraj Masjedi to criticize Turkey's operations in Iraq in an interview broadcast last week. “We do not accept at all, be it Turkey or any other country, to intervene in Iraq militarily or advance or have a military presence in Iraq,” Masjedi said.

Ankara's envoy to Baghdad, Fatih Yıldız, quickly hit back, writing on Twitter that Iran's ambassador was "the last person to lecture Turkey" about respecting Iraq's borders.

As a reaction, the Iranian envoy to Ankara, Mohammad Farazmand, was summoned to the Turkish Foreign Ministry and was told Turkey expected Iran to be on its side in the "fight against terrorism."

Turkey's envoy to Tehran was also summoned on the same day by the Iranian foreign ministry over comments made by Turkish Interior Minister Süleyman Soylu on the PKK elements’ presence in Iran. Soylu last weekend said there were "525 terrorists" in Iran.

Uygur reiterated that Turkey has also been fighting the PKK’s Syrian wing, the YPG, which is backed by the U.S. in Syria and that similar determination exists to fight the organization in neighboring Iraq.

Underlining that relations can be strained if Iran does not support Turkey’s fight against terrorism and backs the PKK, Ugur said: “Though Turkey has not yet taken a step regarding the PKK to not further strain ties with the U.S. on the issue of Syria, there is no such protective shield in Iraq.”

“However, if Iran changes policies and tries to be the protector of the PKK in Iraq as the U.S. did in Syria, there will be significant strategic consequences,” he stated. “Ankara, which risked growing away from an actor such as the U.S. due to its YPG policies, will substantially alter its stance toward an Iran that openly backs the PKK.”