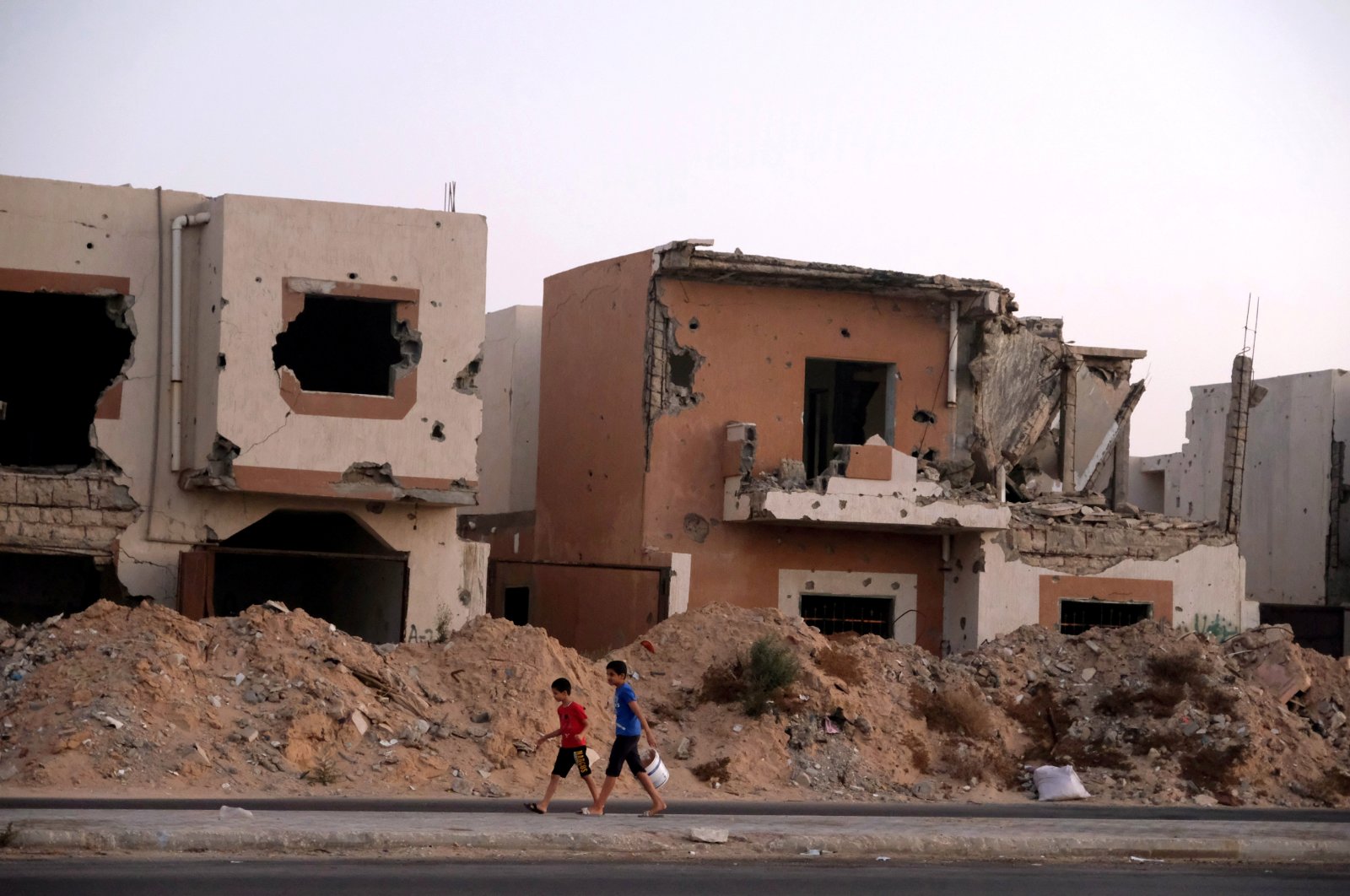 Boys walk past houses that were destroyed in past fighting with Daesh militants in Sirte, Libya, Aug. 17, 2020. (REUTERS Photo)
by Dilara Aslan Aug 23, 2020 1:59 pm
Edited By Dilara Aslan

Turkey’s presence in the war-ravaged country, in support of the U.N.-backed Libyan government, will remain intact and continue as a leading force toward the reestablishment of peace, stability and a permanent political solution to the nine-year-long civil war

The announcement of a cease-fire by rival parties in the Libya conflict last week has been praised by the international community and constitutes the first constructive step the country has taken toward peace since fighting broke out.

As one of the essential actors in the country and a staunch supporter of the U.N.-recognized Libyan government, Turkey will take the lead in the upcoming political process that will embody the reestablishment of peace and stability in the North African country, experts have stated.

“While Turkey’s significance in the eyes of the (U.N.-backed Government of National Accord) GNA has been enhancing, Ankara will be at the fore of those leading Libya’s process for a political resolution. Turkey will be a determinant country in the reconstruction of the country as well as in the army of the GNA and the security sector,” Can Acun, a foreign policy expert at the Foundation for Political, Economic and Social Research (SETA) told Daily Sabah.

After years of violence and civil war, Fayez Sarraj, head of the GNA, based in the capital Tripoli, and Aguila Saleh Issa, speaker of the eastern-based parliament backed by putschist Gen. Khalifa Haftar, each announced a cease-fire on Friday. The leaders, in separate statements, said they wanted to end the fighting and hold elections.

Libya has remained beset by turmoil since the ouster of Moammar Gadhafi in 2011. Though the country's new government was founded in 2015 under a U.N.-led agreement, efforts for a long-term political settlement failed due to a military offensive by eastern-based Haftar's forces while the country has become a battleground for tribal militias, terrorists and mercenaries.

Speaking to Daily Sabah, Nurşin Ateşoğlu Güney of Nişantaşı University and head of the Center of Mediterranean Security (CEMES), underlined that Turkey’s presence in Libya is legitimate, in compliance with international law and has strengthened over time with the help of the gains made in the field and the support given to the Sarraj government.

Since April 2019, Haftar's illegitimate forces have launched attacks on the Libyan capital of Tripoli and other parts of northwestern Libya, resulting in more than 1,000 deaths, including civilians. However, the GNA thwarted a 14-month campaign of Haftar by retaking strategic provinces and clearing southern Tripoli of his militias with the assistance of Ankara.

“The legitimate GNA has undergone difficult times vis-a-vis attacks from Haftar and his backers and lost many regions, including some in the country’s west, and was on the brink of losing Tripoli and Misrata when it was backed into a corner. Yet, Turkey’s intervention has shifted all the balance, and it was after this in which Gen. Haftar lost his entire western gains,” Acun pointed out.

“Haftar, who hasn't accepted a single cease-fire proposal until now, had to comply with this one. The warlord has also, to a great extent, lost his credibility as a political actor,” Acun added, saying that Issa had been leading the cease-fire announcement. “This situation is a major success not only for the GNA but also for Turkey,” the SETA foreign policy expert said.

Libya's High Council of State, an advisory body to the GNA, has vehemently rejected any dialogue with Haftar. "Any dialogue or agreement should be under the Libyan political agreement, which regulated the mechanism of dialogue to be only between elected bodies," it stated Friday, calling also for resuming the production and export of oil and holding those responsible for the closure of oil facilities accountable.

Libya's High Council of State on Saturday lauded Turkey and Qatar's role in ending putschist Haftar's offensive on Tripoli and western parts of the country.

"We appreciate the role of the friendly and brotherly states that supported us in confronting the aggression of terrorist Haftar and his mercenaries, in particular Turkey and Qatar," read the statement.

The council also stressed the importance of expanding the Tripoli-based GNA's authority throughout the entire country. It also called on all sides to respect the United Nations Security Council's (UNSC) resolutions on Libya.

“Taking Qatar on its side (and) opening the way for Germany’s inclusion into the process to find a solution to the Libyan civil war have been the primary successes of Turkey, which used multi-track diplomacy that has led to this point,” Güney stated. “For the upcoming period, it is vital to diversify and increase the number of the countries that have adopted a close stance to Turkey in the Libyan conflict for cooperation and support around the negotiation table.”

Güney elaborated that Turkey’s moves in other regions apart from Libya were decisive in the matter. “Turkey’s discovery of natural gas in the Black Sea (and) its activities in the Eastern Mediterranean (are) all moves are strengthening Turkey's hand,” she said.

On Nov. 27, 2019, Ankara and Tripoli signed two separate pacts: one on military cooperation and the other on maritime boundaries of countries in the Eastern Mediterranean. As part of the military deal, Turkey has sent advisers to help the Libyan Army defeat Haftar's militias. In January, Turkey began deploying soldiers to Libya after Parliament approved a motion responding to Libya’s call for Turkish troops.

Within the scope of the cooperation between Ankara and Tripoli, Turkish military advisers and staff will also provide assistance to restructuring the Libyan Army into a regular army soon after their arrival at the Defense Security Cooperation and Training Assistance Advisory Command that was established as part of a memorandum of understanding between Turkey and Libya. They are set to provide training and logistical assistance in cooperation with Qatar after a series of trilateral meetings. The Libyan Army is currently an informal amalgamation of militias, tribal soldiers and clansmen.

Now that the parties have taken the first step toward dialogue following an almost decadelong civil war, the process has to be translated into a permanent peace. However, international pressure has sought to bring Libya's parties to an agreement several times in past years, and a lasting deal has yet to be reached. The cease-fire declaration has been hailed regionally and internationally, but Haftar has yet to comment on the development.

Prior to the call for a cease-fire, fighting stalled around the central Mediterranean port of Sirte, the gateway to Libya's eastern oil fields and export terminals, and to the key Jufra air base to the south.

The key city of Sirte, which lies some 450 kilometers (280 miles) east of the capital, is currently under the control of Haftar's forces. Sirte is the gate to control vital oil installations, terminals and oil fields that forces loyal to Haftar had shut down earlier this year, cutting off a major source of income for the country.

For Sarraj, Sirte and Jufra must be demilitarized. Issa, on the other hand, made no mention of demilitarized zones but instead proposed the formation of a new presidential council based in Sirte.

“The fact that the Sirte and Jufra regions have to be demilitarized will change the balance of control of the oil fields. Yet, Libya has a long path in front of it. In the end, the current calls for a cease-fire are just the first step toward a political solution,” Acun said.

Saying that she is hopeful regarding Libya’s path to peace, Güney stressed that in order for the cease-fire to be long-running, an international guarantee is needed.

Güney pointed out that Libya has become the stage for international power competition due to its geostrategic significance and oil riches. “Russia is a major actor here; however, the U.S., which has not yet stated a solid stance vis-a-vis the latest developments in the country, will not want a strong Russian presence in the southern wing of NATO. Turkey may benefit and enhance its diplomatic steps with the U.S. and the European Union in this matter,” she said, adding that the U.S.’ uncertain stand is rooted in the nearing elections but that regardless of who is elected as president, the U.S. will definitely oppose Russia.

Russia, on the other hand, which has a military presence in the country through mercenaries and arms support to Haftar, will not want to withdraw easily from Libya and will insist on keeping Sirte and Jufra, Güney added.

Russia's Wagner Group, one of the most controversial mercenary groups in the world and owned by Yevgeny Prigozhin, a businessman with close links to Russian President Vladimir Putin, had turned the Jufra base and airport into a command center to take control of southern oil fields. According to previous media reports and the U.S. Pentagon, the Wagner Group has brought over 1,000 militia members to Libya, including Russian pilots who trained troops loyal to Haftar.

In May, the U.S. military command for Africa (AFRICOM) reported that at least 14 Mig-29s and Su-24s had been flown from Russia to Syria and previously provided photographic evidence that Wagner has laid landmines and improvised explosive devices in civilian areas in and around Tripoli.