Wake up call for Palestinian cause 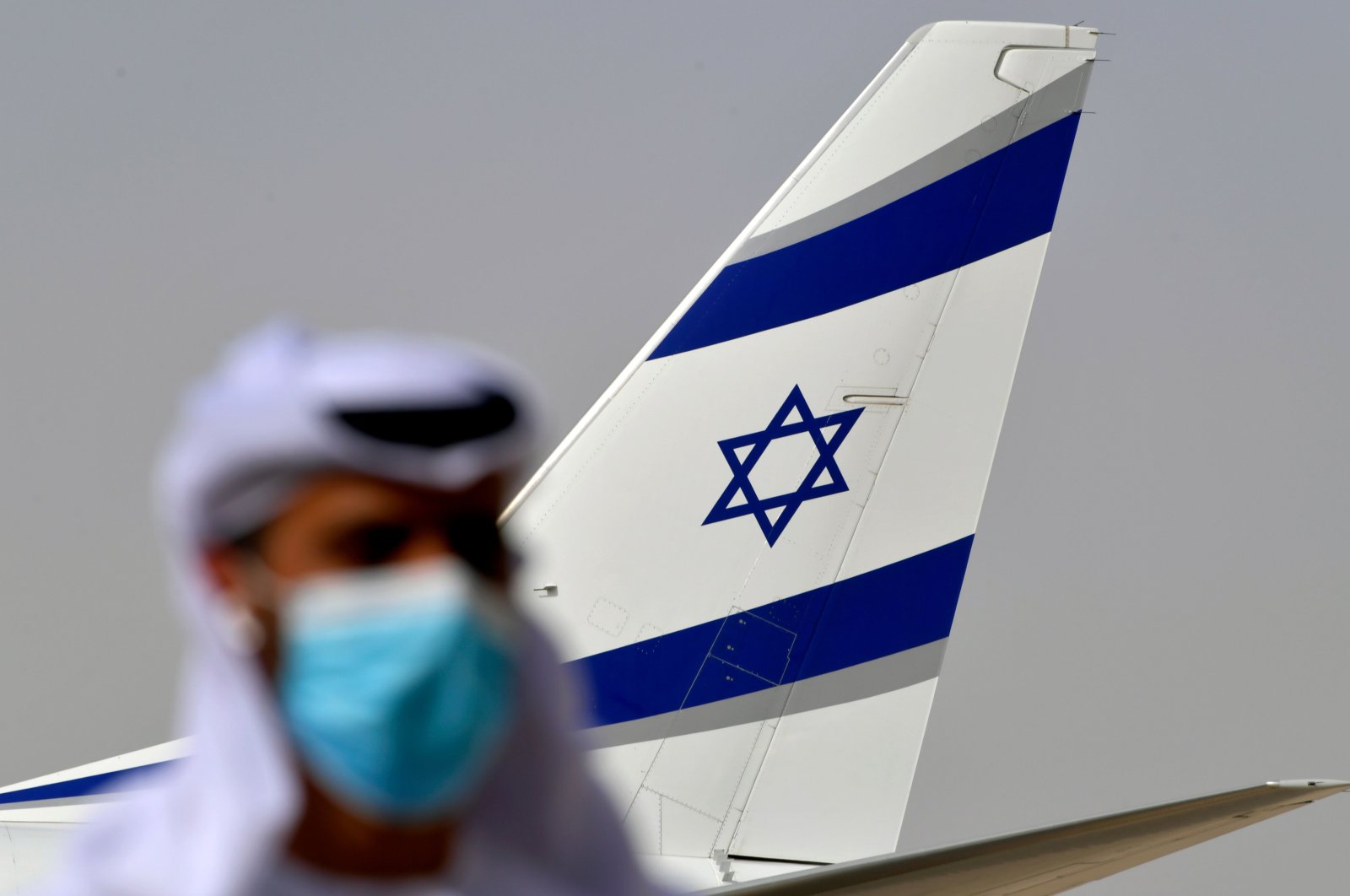 An Emirati official stands near the EI AI plane that carried a U.S.-Israeli delegation to the UAE following a normalization accord, marking the first-ever commercial flight from Israel to the UAE, Abu Dhabi, Aug. 31, 2020. (AFP Photo)
by Nur Özkan Erbay Sep 07, 2020 11:57 am
RECOMMENDED

The agreement reached between Israel and the United Arab Emirates (UAE) and described as the "deal of the century" continues to be one of the most discussed issues in terms of its goal and motivations. Reactions from the international community regarding the normalization process of diplomatic and political relations between the two countries introduced questions in terms of the agreement’s reality.

In this regard, Turkey’s stance parallels this view because Ankara believes the UAE betrayed the Palestinian cause and fanned the flames of Arab and Palestinian anger.

On the other side, there is no indication that Israel stopped the occupation and illegal construction of settlements in the West Bank, Jordan Valley and the Gaza Strip. Moreover, no steps have been taken to return the 6 million Palestinians in refugee status to their own lands.

The assumption that this agreement made between Abu Dhabi and Tel Aviv will bring peace is far from reality. On the contrary, it validates the disregard for the legitimate rights of the Palestinian people that have been stolen for more than 70 years.

Therefore, the agreement was seen as a history of betrayal by nearly all 57 members of the Organisation of Islamic Cooperation (OIC), excluding only Egypt and Saudi Arabia, whose raison d’etre is to give these rights back to Palestine.

The minister further stated that positive steps cannot be expected from the UAE, which tries to destabilize the region in the name of Palestine, and that it is no surprise that it yields in the face of U.S. pressure.

Underlining that Turkey does not intervene in the internal affairs of any Arab state, the Palestinian cause concerns the whole Muslim world, Çavuşoğlu said: “Palestine is our common cause, furthermore, the OIC also supports the Arab peace initiative. This was underlined in our decisions including those made during our Istanbul periodical chairmanship. This is a cooperation that ignores the Arab peace initiative and the rights of Palestine and that serves Israel under the guise of a so-called Palestine peace. In return, it is said that Israel would delay its annexation plan in order not to leave the UAE in a difficult position. Did it delay the plan? No. We see that the annexation continues, that oppression continues. It will continue, though it delays the plan for one or two days. Does the UAE accept this? Yes. This is a betrayal of the common cause. We have always defended the Palestinian cause, this is not Turkey’s cause but that of the whole Islamic world.”

The Arab League in a declaration in January strongly rejected U.S. President Donald Trump’s so-called peace plan. Accordingly, it was indicated that no normalization with Arab states would take place unless the Arab Peace Initiative is accepted. The initiative foresees that “an independent Palestinian state is established in eastern Jerusalem, which was Palestine’s capital in 1967, and states that a solution is to be found for the Palestinian refugee problem under the U.N.’s decision numbered 194 taken in 1948.”

The declaration further warned Israel that this peace plan, which ignores international decisions, should not be realized and that the U.S. and Israel would be held responsible for the outcomes of the mentioned policy. It also called on the international community to reject the occupational government’s activities.

It also stipulated that the League would apply to the U.N. General Assembly and Security Council as well as other international institutions in the case of a plan that usurps the rights of the Palestinians.

Now since all eyes are on the OIC and the Arab League. These institutions are expected to act within the scope of the January declaration as soon as possible and to declare their rejection of this plan. Otherwise, the normalization steps of the UAE with Israel under the pretext of peace will lead to the absolute shelving of a real peace plan in the Middle East, and the OIC and Arab League will be reduced to the status of an observer of the usurpation of the rights of the Palestinians.