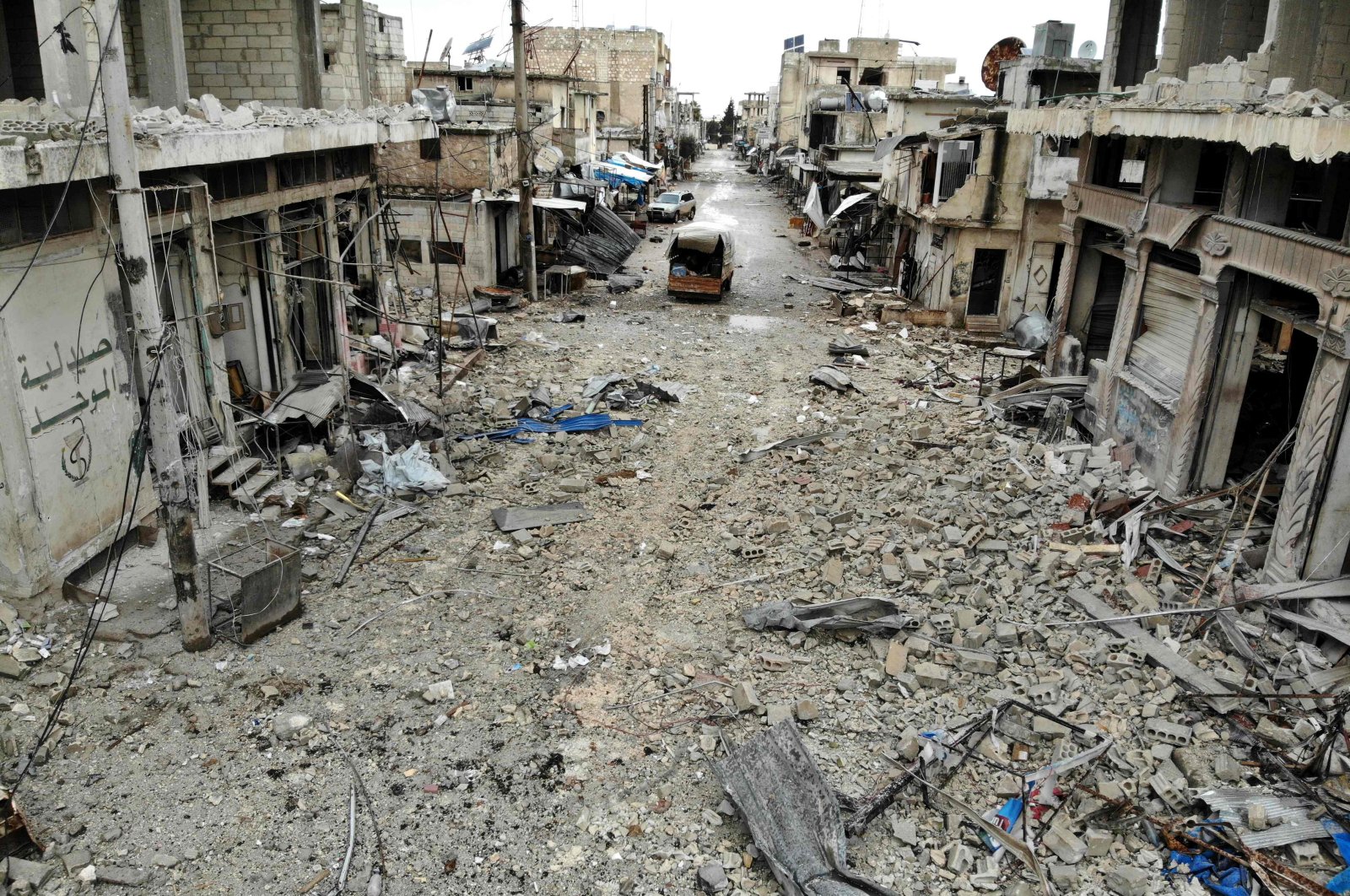 An aerial view of the town of Sarmin, about 8 kilometers southeast of the city of Idlib in northwestern Syria, Feb. 7, 2020. (AFP Photo)
by DAILY SABAH Apr 09, 2020 3:33 pm
Edited By Dilara Aslan
RECOMMENDED

The first report by the Organization for the Prohibition of Chemical Weapons’ (OPCW) investigation team is a crucial step toward ensuring that the culprits of the chemical attack in Syria are held accountable, Turkey’s Foreign Ministry stated Thursday.

“Turkey, which has supported the 2018 decision which appointed the OPCW to find the responsible of chemical attacks in Syria, will continue to follow and support all steps taken in the international arena, especially that of the U.N. and OPCW, to ensure accountability in Syria,” the written statement underlined.

The statement further reminded that the use of chemical weapons is a heavy violation of the Chemical Weapons Convention as well as a crime against humanity and a war crime.

“Those responsible for this act, which is a clear violation of international law, should not be left unpenalized. This report is an open evidence of which ugly ways the (Syrian) regime has used on its own citizens for its purposes. The regime, which has been killing its own citizens without regard to children for nine years, must be called to account,” the ministry added.

It has been two years since the Bashar Assad regime’s chemical attack on civilians in Syria's Douma killed more than 41 people and injured more than 500 others. Despite concrete evidence that it used chlorine, the Syrian regime has still not officially been held accountable by international authorities for the massacre. The April 7, 2018 massacre helped the regime take control of the town.

Last year, a final report released by the OPCW confirmed that chlorine was used in the attack. The report said there were "reasonable grounds that the use of a toxic chemical as a weapon has taken place on April 7, 2018. This toxic chemical contained reactive chlorine." The long-awaited findings confirmed an interim report, which medics said killed about 40 people when a cylinder containing poison gas landed on the roof of a housing block.

The report did not place blame on anyone because it was outside of OPCW's scope at the time, although the watchdog has since been given powers to investigate responsibility for all chemical attacks in Syria dating back to 2014. A team of OPCW inspectors took more than 100 samples from seven sites in Douma after they gained access to the town several weeks after the attack. The team also interviewed witnesses and carried out a series of tests, including toxicological and ballistic analysis, The Hague watchdog said.

Hundreds of thousands of innocent people have been killed in the nine years of brutal civil war that have riddled Syria. Yet, these attacks were not carried out through conventional weapons alone as the Assad regime repeatedly used chemical weapons, and no legal process is being conducted for these crimes. According to data supplied by Anadolu Agency (AA), the Assad regime has used chemical weapons in Syria at least 216 times over the last nine years. The regime conducted its first major chemical attack on Aug. 21, 2013, in the eastern Ghouta region of Damascus. The onslaught, which killed over 1,400 civilians, raised international concern at the time.