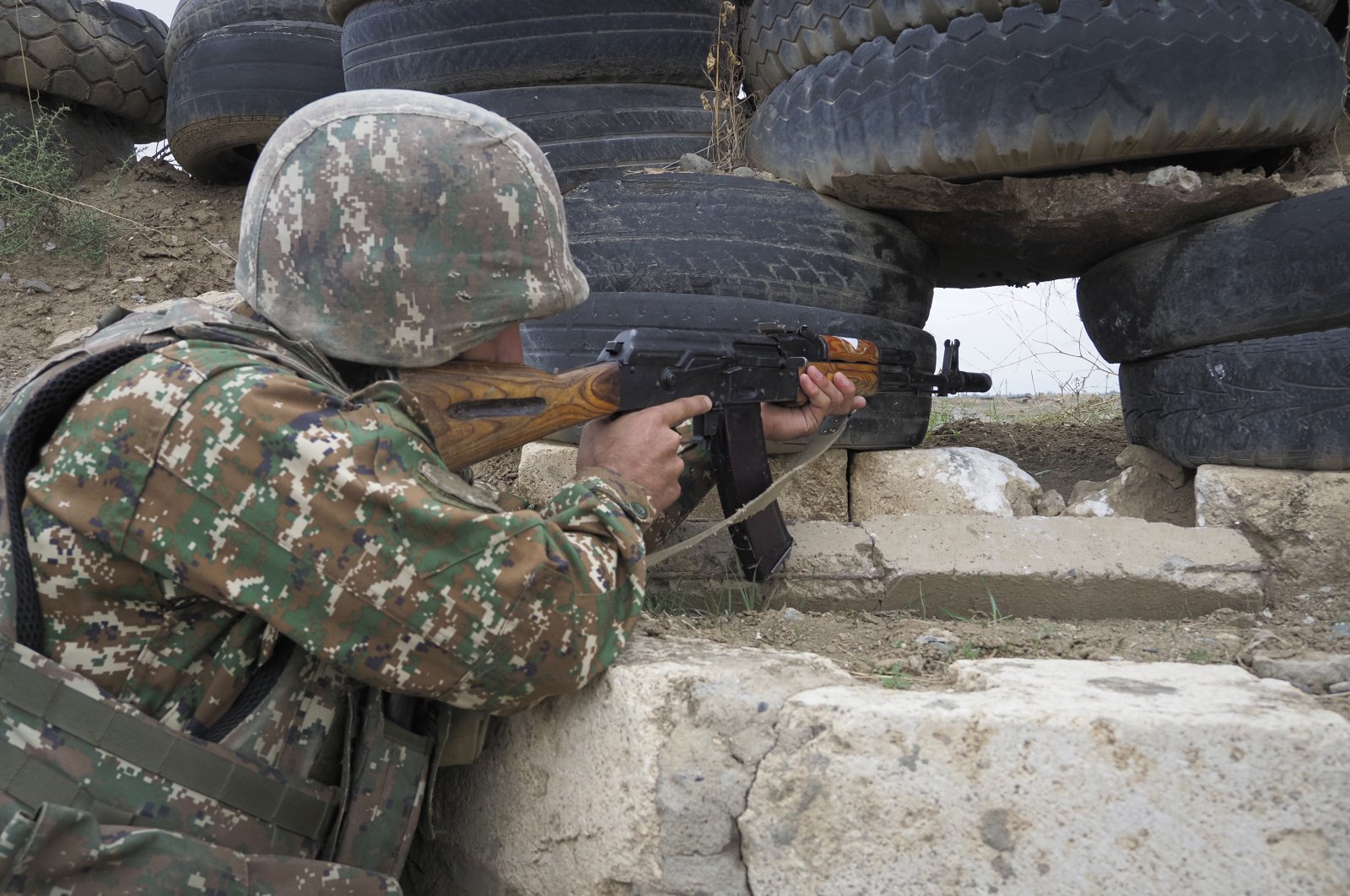 An Armenian soldier holds a Kalashnikov machine gun as he looks toward Azerbaijan's positions from a dugout at a fighting position on the front line, during a military conflict against Azerbaijan, Oct. 21, 2020. (AP Photo)
by DAILY SABAH
Oct 21, 2020 5:59 pm

Armenian Prime Minister Nikol Pashinian’s statements ruling out a diplomatic solution for the ongoing Nagorno-Karabakh crisis “are disrespectful in the face of the international community’s steps taken to solve the conflict through diplomacy,” the Azerbaijani presidential aide stated Wednesday.

“Azerbaijan supports a solution to the problem through negotiations according to the road map based on United Nations Security Council (UNSC) decisions,” Hikmet Hajiyev said in a written statement.

“The international community, especially the co-chair countries of the Organization for Security and Co-operation in Europe (OSCE), have to draw a conclusion from Yerevan’s statements,” he added.

Hajiyev’s words came after Pashinian earlier the same day said Armenia should fight until an acceptable diplomatic solution is found and called on the citizens to volunteer for the Karabakh front.

Saying that the Armenian prime minister’s statements once again revealed that Yerevan does not seek a peaceful solution to the problem, Hajiyev highlighted that Armenia aimed to continue its occupation of Azerbaijani territory.

He reminded that Pashinian called on all civilians and civilian authorities to take up arms “for the sake of his own irresponsible political ambitions,” Hajiyev said. “Armenia’s official stance proves who is violating the humanitarian cease-fire and further raises tensions in the region.”

Turkey's Presidential Spokesperson Ibrahim Kalın also said in a Twitter statement that Pashinian's remarks opposing a diplomatic solution reveal Armenia's intentions. "It is obvious who wants war. This proves Turkey's and Azerbaijan's righteousness. Peace and stability can come to the South Caucasus when Karabakh is liberated from occupation."

Speaking in a live video address on Facebook, Pashinian said that all Armenians must “take up arms and defend the motherland” and urged local mayors to organize volunteer units.

Azerbaijani authorities said at least 60 civilians have been killed and 270 wounded since clashes erupted on Sept. 27.

A new cease-fire, the second since hostilities around Armenian-occupied Nagorno-Karabakh began, was announced on Saturday and took effect at midnight, but Armenia immediately violated the truce by carrying out attacks against civilians.