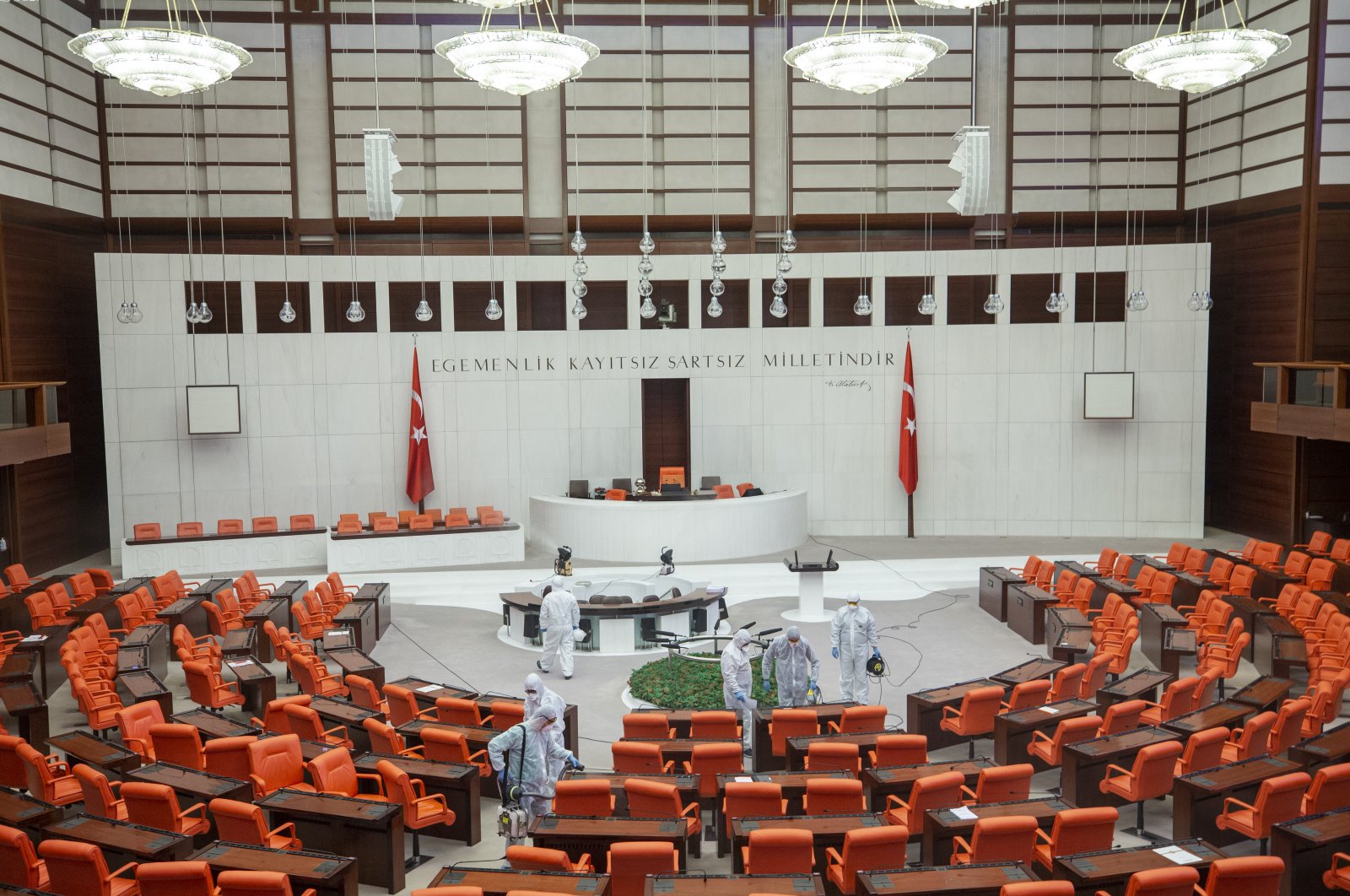 Turkey's Parliament has been disinfected within the scope of measures taken against the spread of COVID-19, March 13, 2020. (AA Photo)
by DAILY SABAH Mar 16, 2020 1:48 pm
Edited By Dilara Aslan
RECOMMENDED

As more measures against the spread of the novel coronavirus (COVID-19) in Turkey are taken, the group meetings of political parties in the Turkish Parliament have also been canceled.

According to sources of the ruling Justice and Development Party (AK Party), the weekly group meeting in the parliament under the leadership of President and head of the AK Party Recep Tayyip Erdoğan will not be held this week. If it will be held after next week, no visitors will be accepted to the group meeting.

Besides the AK Party, the group deputy chairmen of the main opposition Republican People’s Party (CHP) and the Nationalist Movement Party (MHP), the Good Party (IP) and Peoples' Democratic Party (HDP) also announced on social media that their group meetings this week are canceled.

Last week, the Turkish Grand National Assembly stated that no visitors would be allowed in the Parliament until March 31.

Meanwhile, the CHP is planning to reschedule its ordinary congress planned for the end of this month.

As part of the measures, the AK Party also canceled its upcoming camp in Ankara's Kızılcahamam district which was supposed to be held from April 3-5.

MHP became yet another party that paid major attention to the measures against the coronavirus by disinfecting the entire party's headquarters while urging party members to refrain from close encounters.

On the other side, some politicians are heavily criticized for holding meetings of large participation in closed areas despite all warnings. The latest of such examples took place in the congress organized by CHP Istanbul head Canan Kaftancıoğlu in a closed space in Istanbul last weekend.

While all political parties including the CHP were postponing group meetings, organizations, camps and visits, it drew attention that Kaftancıoğlu did not cancel the meeting and ignored the criticism on social media. Furthermore, the CHP Istanbul Women’s Branch participants did not take any precautions such as protection and masks.

During the congress, hugs and handshakes took place as the candidate for the head of CHP’s Istanbul Women Branch, Aysun Kılıçaslan Soku, announced her withdrawal. Soku had wanted the congress to be postponed due to the coronavirus threats.

Yet, when her request was not answered she announced her withdrawal one day before the congress on social media “I hereby announce my nomination from the 14th CHP Istanbul Women’s Branch Congress, which will take place at a time of high risk regarding the coronavirus on March 15, 2020, in the name of public health and especially in the name of people and health first. My candidacy is not more important than our organization.”

A vast number of precautions were taken in Turkey to tackle the spread of the virus, and several organizations and events were canceled. Health Minister Fahrettin Koca called on everyone to stay away from public places.