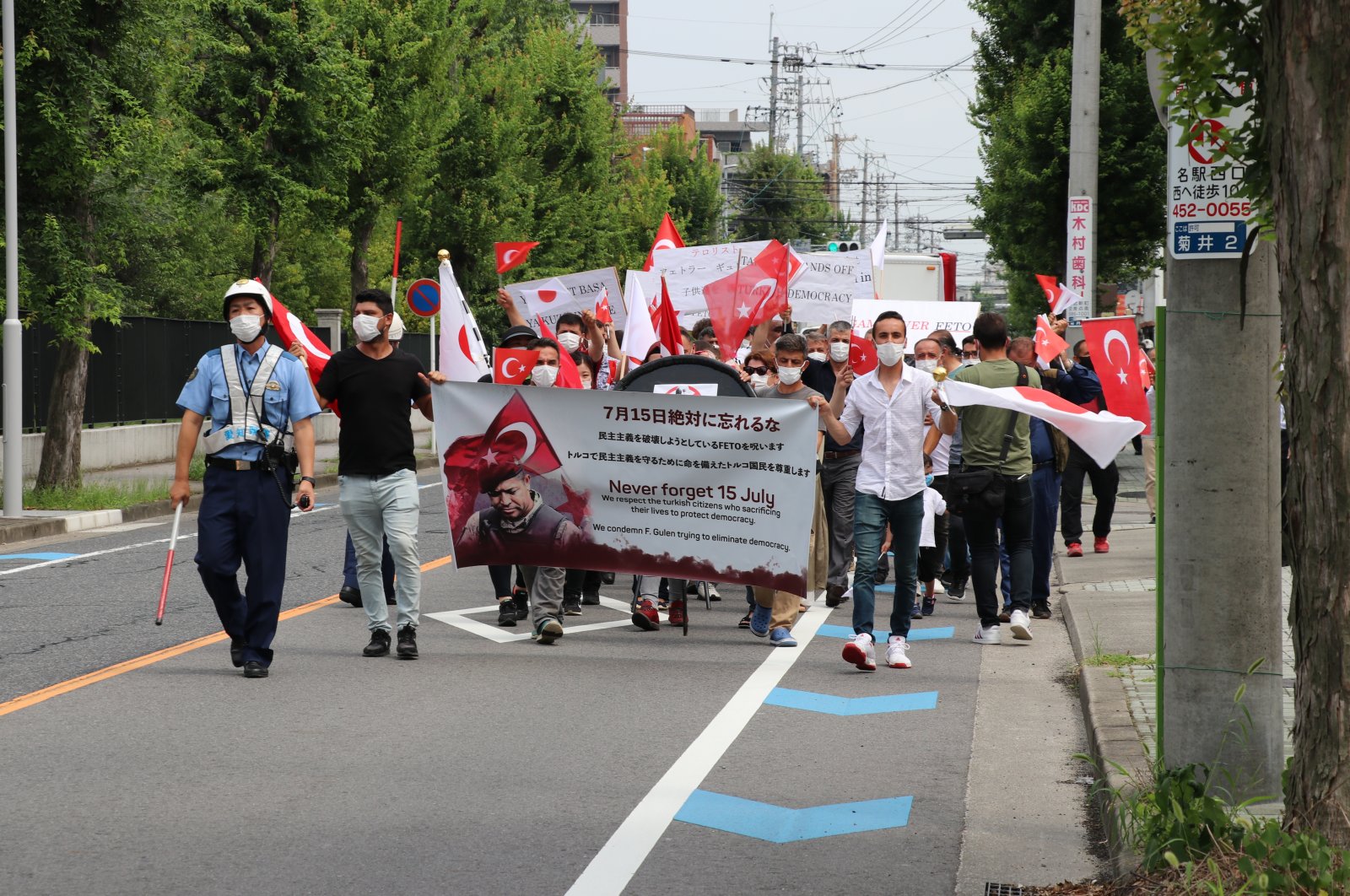 People demonstrate in front of the Enishi International School (EIS), which is linked to the Gülenist Terror Group (FETÖ), in central Nagoya, Japan, Aug. 4, 2020. (AA Photo)
by DAILY SABAH Aug 04, 2020 11:20 am
RECOMMENDED

A demonstration was held by volunteers of the Turkish-Japanese Cultural and Trade Association and representatives of Turkish nongovernmental organizations (NGOs) in front of a Gülenist Terror Group (FETÖ) school in Japan’s Nagoya city on Tuesday.

The crowd, carrying Turkish and Japanese flags, walked from Shindo park in the city center to the Enishi International School (EIS), which was under police control, in Nishi district.

Though the authorities did not let people approach the school’s door, it was allowed for the head of the culture and trade association, Adem Gündoğdu, and a few others to place a black wreath in front of it.

Deputy Foreign Minister Yavuz Selim Kıran praised the protests, saying, “our citizens continue to display strong national unity and solidarity in the face of FETÖ all over the globe.”

“I thank the Turkish community, mostly comprised of fellow Ordu countrymen, in Nagoya and the Turkish-Japanese Cultural and Trade Association,” Kıran tweeted on the same day, referring to the northern Black Sea province of Ordu.

Following the demonstration, Gündoğdu stood in silent homage for those who lost their lives during the July 15 coup attempt and read the Turkish national anthem at the park opposite the school.

Condemning the coup attempt and attacks on the Turkish people, Gündoğdu underlined that the terror group continues to attempt to expand its influence both in Japan and globally, adding that FETÖ poses a threat to every country where it is found.

FETÖ and its U.S.-based leader Fetullah Gülen orchestrated the failed coup on July 15, 2016, which killed 251 people and injured nearly 2,200.

FETÖ was once known for its schools, which ranged from Africa to the far corners of Asia, before it launched a campaign to seize power in Turkey with its infiltrators in the police, military and judiciary.

After the failed coup, the Maarif Foundation was founded on June 17, 2016, and officially started its activities a few months later. One of Maarif's main missions has been to take over the schools formerly operated by FETÖ, which was known for its international network of educational institutions. It was also established to set up Turkish schools abroad. Since its foundation, Maarif has become a pioneering institution to represent Turkey and Turkish culture worldwide.

Still, despite the efforts of Turkey and the Maarif Foundation, the FETÖ threat is far from disappearing in some countries.