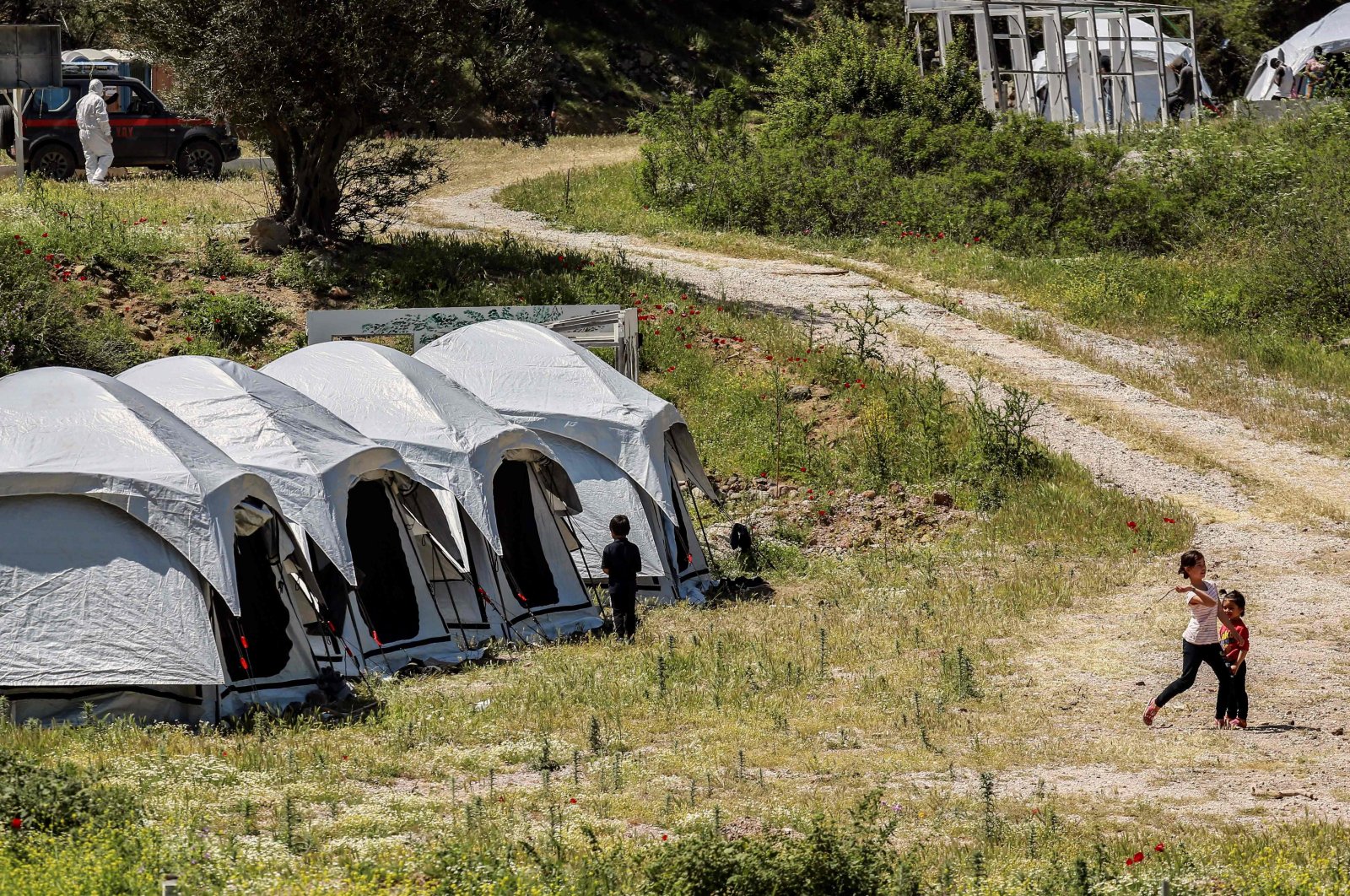 Children play outside the tents at a migrant and refugee camp where cases of COVID-19 were detected, on the Greek island of Lesbos, on May 13, 2020, as the country faces the novel coronavirus pandemic. (AFP Photo)
by DAILY SABAH WITH AGENCIES May 14, 2020 11:09 am
Edited By Nurbanu Tanrıkulu Kızıl
RECOMMENDED

Two migrants and refugees who recently arrived on the Greek island of Lesbos have tested positive for coronavirus, officials said Wednesday.

Greek authorities are already trying to contain COVID-19 outbreaks in an Athens hospital and among a Roma community.

The infected migrants, reportedly two African men who were asymptomatic, have been quarantined in tents in a coastal area far from the island's overcrowded migrant camps, officials said.

They were among a group of 51 asylum-seekers from Afghanistan and African nations who landed on the island on May 6, a local police source said.

Any Greeks who came into contact with the group have so far tested negative. But 25 local residents and two coast guards have been quarantined as a precaution, the civil protection authority said.

More than 150 people have died from COVID-19 in Greece, where the government is gradually reopening the economy after a six-week lockdown.

Most retail stores opened this week, and secondary schools and open-air archaeological sites are scheduled to reopen on May 18. Private beaches are also expected to reopen on Sunday.

Migrant camps remain under lockdown until May 21.

There have been confirmed COVID-19 cases in two camps and at a hotel on the mainland – although none in migrant camps on the islands, where the worst congestion occurs.

There are over 33,000 asylum-seekers and migrants packed into camps on the islands of Lesbos, Chios, Samos, Leros and Kos that were originally built to handle fewer than 6,100 people.

Earlier Wednesday, state TV ERT reported 25 staff at Elpis public hospital in Athens had been quarantined after a patient tested positive for the virus. Four members of the hospital staff have contracted the virus, the federation of Greek public hospital workers said.

Officials on Wednesday were also probing an outbreak in a Roma neighborhood near the central city of Larissa, with 10 new cases in an area where contagion had also surfaced in April.

Over 650 tests were conducted in the area on Wednesday, the civil protection authority said.

Aris Psyhas, a Larissa city spokesman, said seven of the 10 cases were members of the same family.

So far, 60 people from the Roma neighborhood have tested positive and are quarantined in a local clinic, Psyhas told Agence France-Presse (AFP).

The Greek asylum service’s operations have been scaled back, like many public services, amid restrictions on travel and movement the government set in response to the pandemic.

The latest humanitarian crisis in Syria's Idlib, caused by Bashar Assad's attacks on civilian-populated areas, has forced nearly 1 million people to move near the Turkish border for refuge. The renewed attacks risked another wave of migration to Turkey, which already hosts 3.7 million Syrian refugees and says it cannot take in any more.

In response to the lack of humanitarian and financial aid from the international community and the attack by Assad-allied forces on Turkish soldiers, Ankara began allowing refugees to migrate toward Europe through land borders in late February. Thousands of migrants and refugees flocked to the Turkish province of Edirne along the border with Greece and Bulgaria to make their way into Europe following Ankara's decision.

Many camped out near the Turkish side of the border, despite Greece's insistence that its border was closed. Greece has been widely criticized for using excessive force, including the firing of water cannons and tear gas to repel incoming migrants.

The Human Rights Watch urged Greece and the EU to respect human rights in its response to Turkey's policy of not stopping migrants and refugees trying to leave for Greece. The international human rights group also criticized a decision by Athens to suspend new asylum applications until April and summarily deport those who arrived in the surge from Turkey. Inhumane conditions in Greece’s refugee camps have been another point heavily criticized.

Greece's response to those trying to enter the country without prior authorization was harsh, with at least three migrants killed i March by Greek security forces on the land border with Turkey. Many others were battered and teargassed.