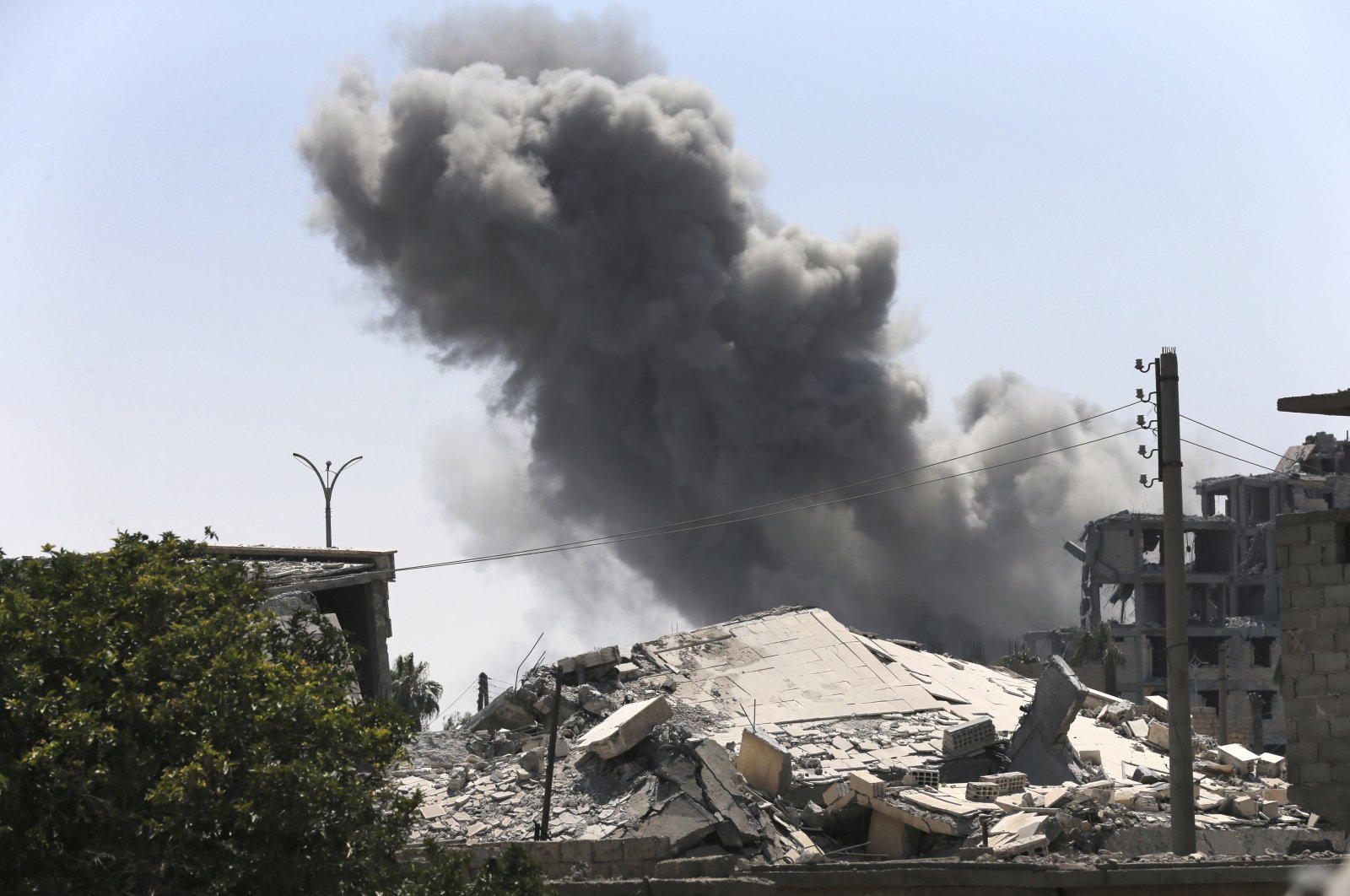 Black smoke rises from a coalition airstrike which attacked a Daesh militant position, on the front line on the eastern province of Raqqa, Syria, July 26, 2017. (AP Photo)
by DAILY SABAH May 04, 2020 12:12 pm
Edited By Dilara Aslan
RECOMMENDED

The Daesh terrorist organization used a gorge in northeast Syria as a dumping ground for the bodies of those it had abducted or detained, Human Rights Watch (HRW) said Monday, calling on Turkey and the Syrian National Army (SNA) to protect the scene of the crime for a further investigation of the killings.

“Al-Hota gorge, once a site of natural beauty, has become a place of horror and reckoning,” said Sara Kayyali, Syria researcher at HRW, adding that exposing what happened there, as well as at other mass graves in Syria, was crucial to determining what had happened to thousands of the people Daesh executed and for holding their killers to account.

Daesh controlled the territory around al-Hota gorge, 85 kilometers (53 miles) north of Raqqa city, from 2013 to 2015. According to the rights group, across Syria, more than 20 mass graves containing thousands of bodies have been found in areas formerly held by the terrorist organization.

Local residents told HRW that they recalled Daesh members threatening to throw them into al-Hota when they were in control of Raqqa, while others said that they saw bodies scattered along the gorge. The rights group also said that a Daesh-recorded video taken there had been found.

“The inspection of al-Hota with a Parrot ANAFI drone revealed six bodies floating in the water at the bottom. Based on the state of decomposition, the bodies were dumped there long after ISIS had left the area. The identities of those victims and their causes of death remain unknown,” the report said. Accordingly, drone imagery suggests that the gorge is even deeper than it seems, indicating the possibility that more bodies could be lying there.

The rights group brought to attention a similar report released in February documenting that Daesh abducted and detained thousands of people during its “reign” in Syria, executing many. Among the missing were activists, humanitarian workers, journalists and anti-Daesh fighters from a range of groups, as well as local residents who fled the terrorist group.

“Turkey and the Syrian National Army should treat al-Hota and other mass graves in the area as crime scenes and secure the sites so potential evidence is not destroyed,” the HRW said, “they should ensure that al-Hota is cleared of booby-traps and unexploded munitions so that forensic experts can descend into the gorge, locate and remove bodies and begin the painstaking job of identification.”

The rights group stated that with limited resources, minimal outside support and security concerns, the investigation of the scene was a difficult task.

“Whichever authority controls the al-Hota area is obliged to protect and preserve the site,” Kayyali said. The collection of evidence to hold Daesh members accountable for their horrendous crimes, as well as those who dumped bodies in al-Hota before or after Daesh, should be facilitated, she added.