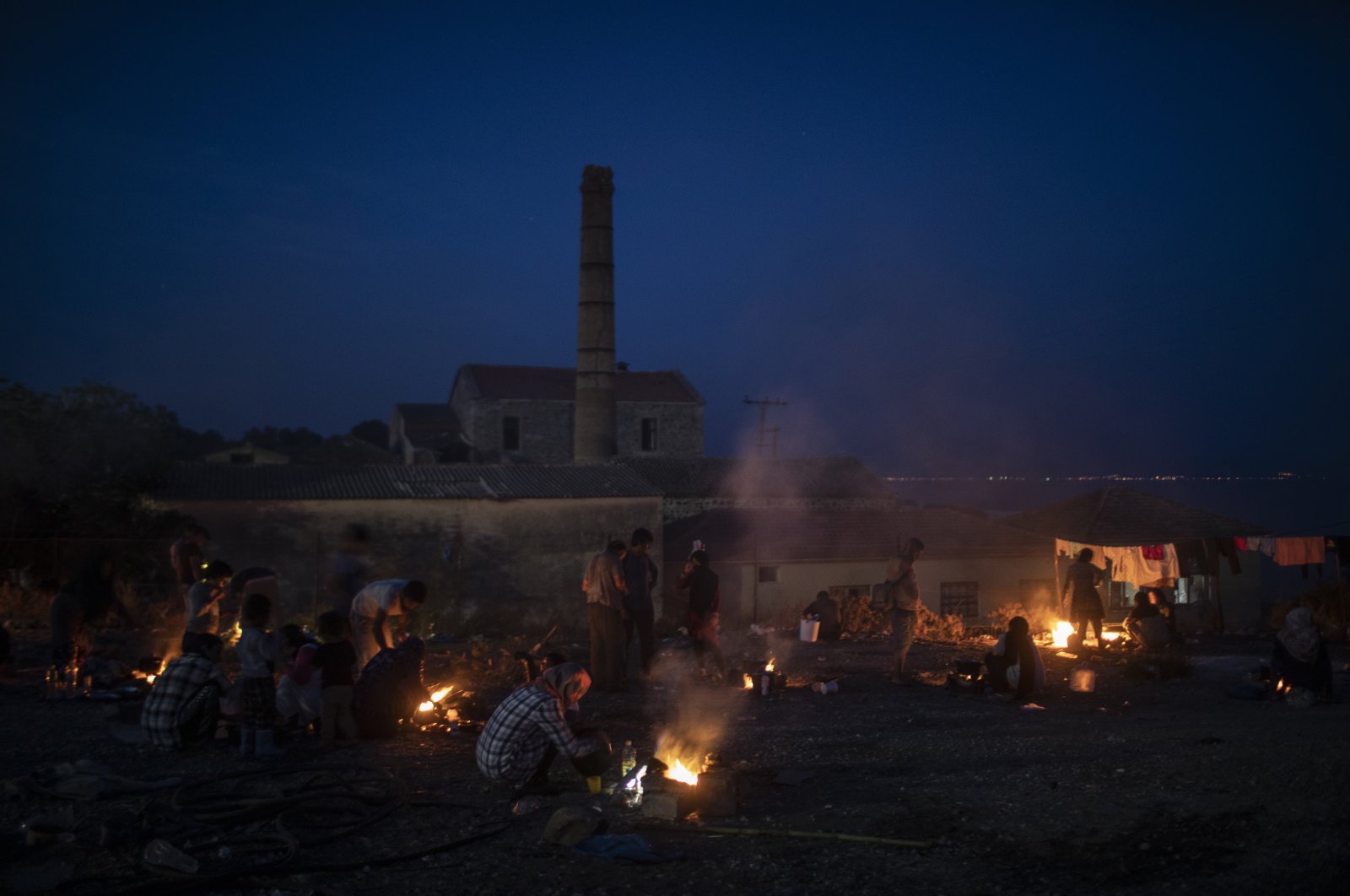 Refugees and migrants from the destroyed Moria camp cook over makeshift fires, on the island of Lesbos, Greece, Sept. 17, 2020. (AP Photo)
by DAILY SABAH WITH AGENCIES Sep 22, 2020 11:36 am
Edited By Nurbanu Tanrıkulu Kızıl
RECOMMENDED

Rights organizations have lodged a legal complaint with the European Commission against Greece for alleged systematic rights breaches of people seeking asylum in Europe, they announced Tuesday.

In a joint legal complaint brought forward by lawyers on behalf of the human rights organizations, WeMove Europe and Oxfam urge the commission to potentially trigger proceedings against Greece for breaches of European Union law over the country's treatment of migrants.

"The European Commission is the guardian of EU law, and it should uphold and protect the fundamental rights of all people across Europe," the head of Oxfam's EU office, Marissa Ryan, said in a press release.

"What happened two weeks ago in Moria camp demonstrates Europe's collective failure to do so," she said.

The notoriously overcrowded camp in Moria burned down earlier this month, forcing thousands of migrants to sleep on the streets. Some EU member states have offered to temporarily host some of the migrants, but many thousands more remain on the island of Lesbos.

The organizations claim that this was part of a systematic failure by Greece to prevent human rights breaches, such as "continued violent pushbacks of people seeking asylum toward Turkey and the blatant disregard for asylum."

The complaint filed by De Brauw Blackstone Westbroek alleges a range of other EU law breaches, including the lack of access to asylum applications and arbitrary detention.

But the rights organization said responsibility did not only lie with Greece. "This is more than just the story of Greece. These are Europe's refugee camps," said Giulio Carini, senior campaigner at WeMove Europe.

The commission is set to release its new asylum and migration strategy Wednesday, with rights campaigners fearing a restrictive asylum policy.

It is estimated that over the last three years, more than 70,000 migrants and refugees have been pushed back to Turkey by Greece.

The EP's Committee on Civil Liberties, Justice and Home Affairs has asked Athens to explain the pushbacks.

According to Britain's The Guardian and Dutch website De Correspondent, Frontex is no mere spectator to Greek pushbacks but actively helps these illegal activities.

Jens Moller, a Danish staffer with Frontex's Operation Poseidon in the Aegean, confirmed the media claims.

On Danish radio, Moller related an incident in which they told Operation Poseidon's headquarters they had found 33 asylum-seekers seeking to reach Greece's coast.

He said Poseidon officials ordered them to "put the refugees back in the rubber boat and push them out of the Greek waters."

Under international laws and conventions, Greece is obliged to register any illegal migrants entering its territory; yet, this is not the case for some migrants. Security sources say that accounts of migrants interviewed with Turkish migration authority staff and social workers show that they are forced to return to Turkey, where they arrived from their homelands with the hope of reaching Europe.