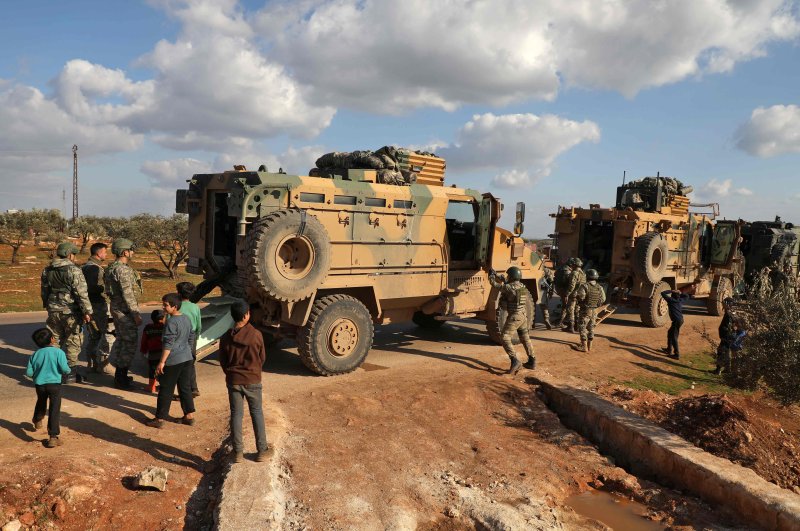 A Turkish military convoy is seen parked near the town of Batabu on the highway linking Idlib to the Syrian Bab al-Hawa border crossing with Turkey, March 2, 2020. (AFP Photo)
by Daily Sabah with Reuters Mar 04, 2020 8:44 am
Edited By Nurbanu Tanrıkulu Kızıl
RECOMMENDED

Russia claimed Turkey is failing to meet its obligations under a pact to create a demilitarized zone in Syria's Idlib province, as Turkish officials urge Moscow to push the Assad regime to uphold the cease-fire as per the Sochi deal and halt attacks on civilians.

The RIA news agency quoted a Russian defense ministry spokesman as saying opposition fortifications had merged with Turkish outposts in Idlib, allegedly resulting in daily attacks on Russia's Hmeimim air base in Syria.

Turkey had amassed troop numbers in Idlib equal to a mechanized division, the Russian spokesman said.

Turkey launched Operation Spring Shield on March 1, after incessant violations of the Idlib cease-fire agreement, including attacks on Turkish observation posts that killed over 50 soldiers in the past month.

Turkish officials have been warning Russia and other countries that the humanitarian crisis in Idlib threatens its national security and would create another refugee influx at its borders.

Turkish military representatives were not immediately available for comment.

The Russian accusation came on the eve of a Thursday meeting in Moscow between President Recep Tayyip Erdoğan and his Russian counterpart, Vladimir Putin.

They are expected to try to de-escalate tensions that have brought Turkey and Russia dangerously close to direct military confrontation.

Turkey has been criticizing Russia for cooperating with the Assad regime, targeting innocent civilians under the pretext of fighting terrorists in northwestern Idlib province. However, the regime is not alone in its attacks, ongoing since April 2019. As its backer, Russia is often active on the ground, aggravating the humanitarian crisis.
According to the September 2018 Sochi agreement, the cease-fire in the Idlib region would be preserved and heavy arms and radicals would withdraw from the region. Before the agreement, the Assad regime was signaling a huge operation on Idlib, causing fears of a new humanitarian crisis for the international community.