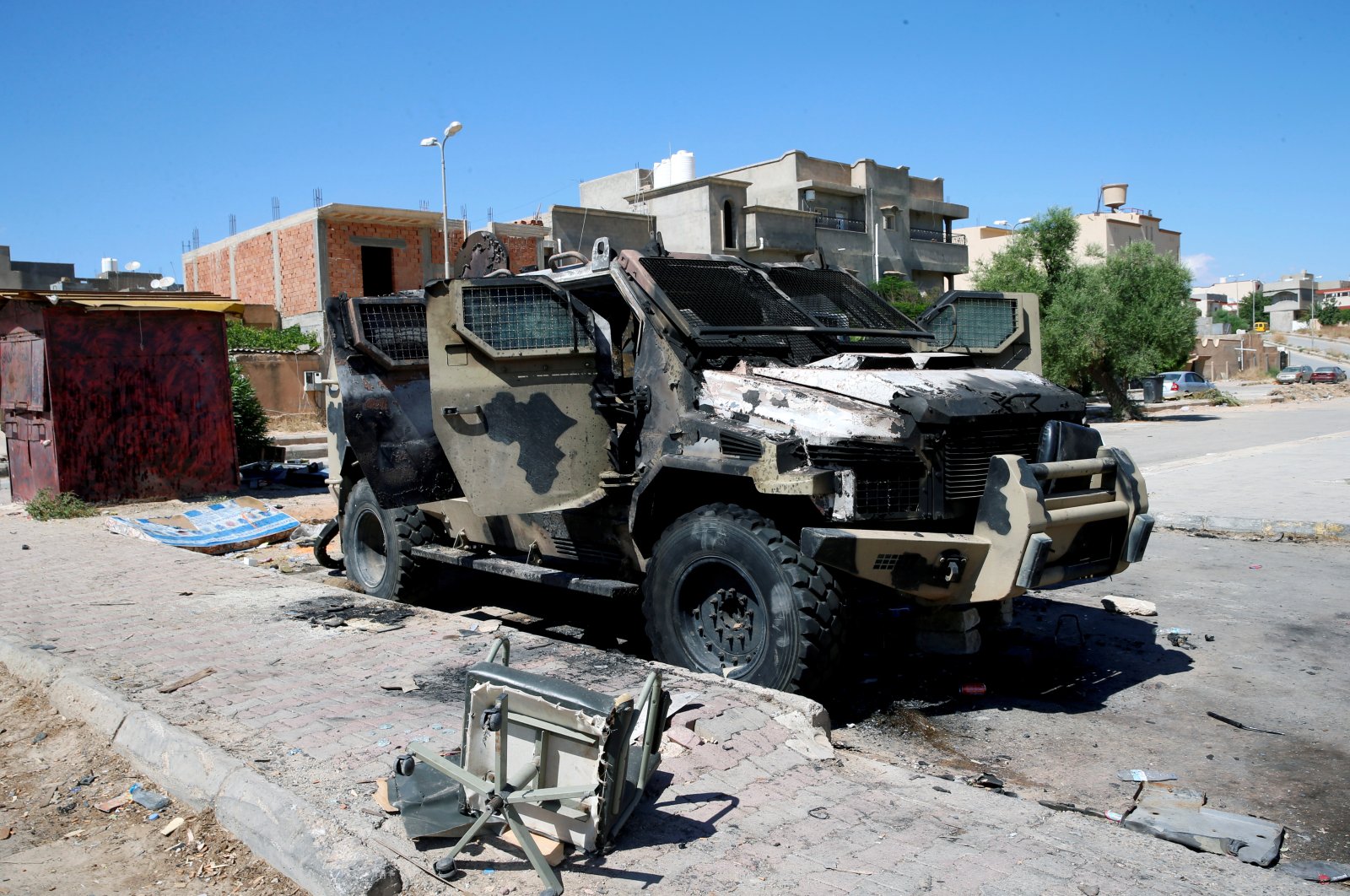 A destroyed and burnt vehicle, that belongs to the putschist Gen. Khalifa Haftar, is seen in Gharyan, south of Tripoli, Libya June 27, 2019. (Reuters File Photo)
by DAILY SABAH WITH AGENCIES
Jun 30, 2020 10:16 am

Russia is sending reinforcements to Libya to help warlord Khalifa Haftar, according to a report published Monday.

With Russian cargo planes regularly shuttling between a Russian airbase in Syria and Libya in recent weeks, U.S. military officials said Moscow could deliver weapons or troops to strengthen the warlord, the report said.

It added that Russia has also dispatched MiG-29 fighter jets and an advanced radar system.

The planes could be piloted by inexperienced contractors who will not adhere to international law, warned Marine Corps Brig. Gen. Bradford Gering, director of operations for the U.S. Africa Command.

It also noted that Russia's Foreign Ministry did not respond to a request for comment about the military support as they have said in the past that the military contractors do not represent the Russian government.

Over the weekend, the Libyan government complained about the existence of Russian mercenaries in the country, saying that they occupy the main oil fields and the government aims to clear foreign forces soon.

Libyan Army Spokesperson Muhammed Qanunu said Sirte, a focal point of criminal provisions and Russian mercenaries, who were defeated in Tripoli and Tarhuna, had become the most dangerous place for Libya's peace and security, according to a statement issued by the press office of Operation Volcano of Rage.

The Wagner mercenaries had turned the Jufra base and airport into a command center to take control of southern oil fields. "We are determined to save these cities through either peaceful or military means," he said.

According to previous media reports, the Wagner Group has brought over 1,000 militias to Libya, including Russian pilots who trained troops loyal to the putschist Gen. Khalifa Haftar. There were also reports of Russian Sukhoi-22 warplanes flying over Libya.

The Mercenaries previously had field experience in Ukraine and are now fighting in Libya, according to the media.

On Monday, the United States expressed concern about the Russian mercenaries' interference in Libya's energy facilities and oil fields, calling them "a direct assault on Libya’s sovereignty and prosperity."

U.S. State Department Spokeswoman Morgan Ortagus shared a tweet saying: "We share Libya's National Oil Corporation's deep concern about the interference of Russian Ministry of Defense's proxy Wagner and foreign mercenaries against Libyan facilities and personnel at the (El-Sharara) oil field. This is a direct assault on Libya’s sovereignty and prosperity."

Libya has been torn by a civil war since the ouster of late ruler Moammar Gadhafi in 2011. The new government was founded in 2015 under a U.N.-led agreement, but efforts for a long-term political settlement failed due to a military offensive by Haftar's forces.

The U.N. recognizes the Libyan government headed by Fayez al-Sarraj as the country's legitimate authority as Tripoli battles Haftar's militias.