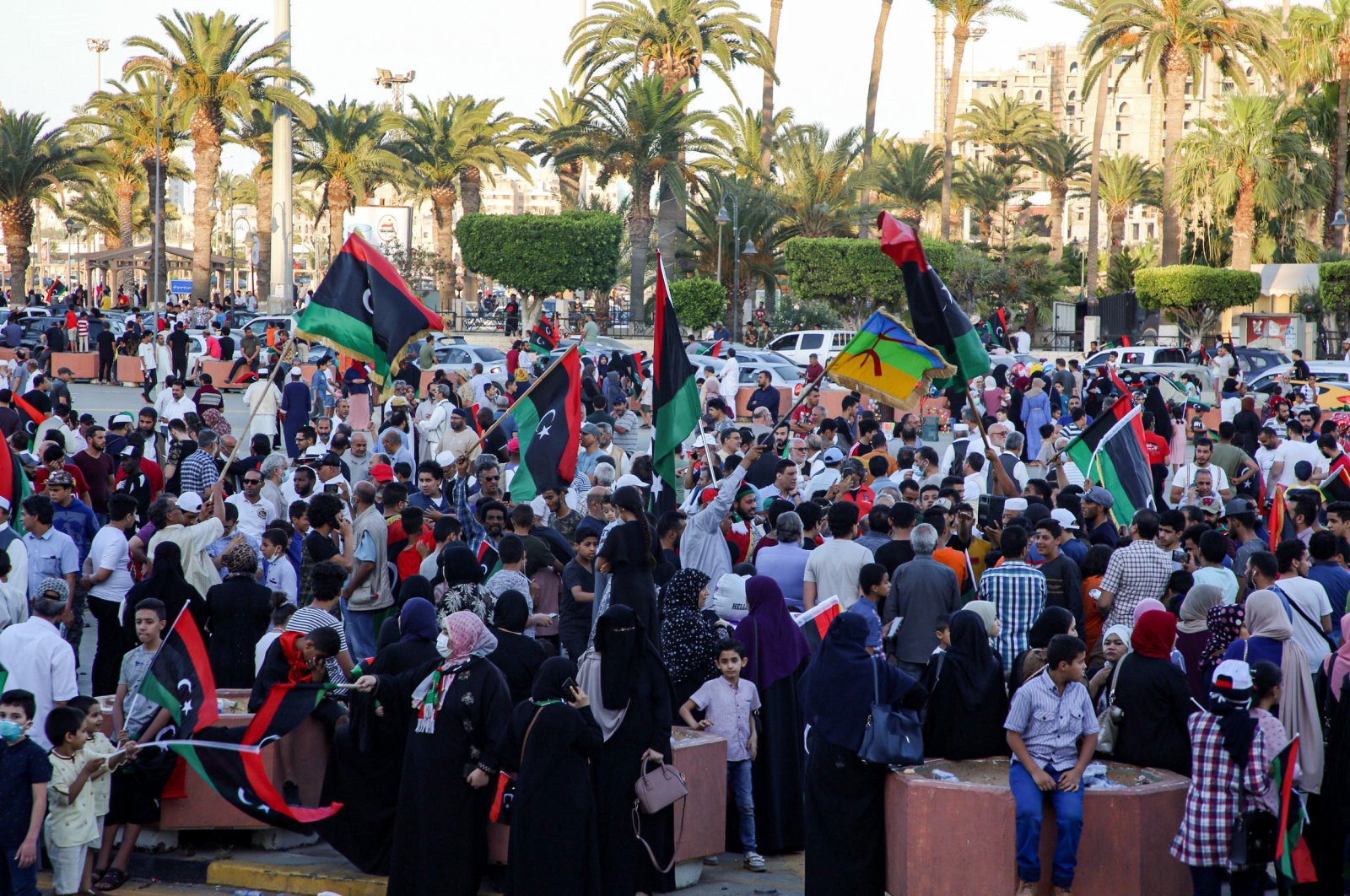 People celebrate with Libyan national flags in the capital Tripoli's Martyrs' Square on June 5, 2020, after fighters loyal to the UN-recognised Government of National Accord (GNA) captured the town of Tarhuna. (AFP Photo)
by Compiled from Wire Services Jun 07, 2020 11:20 am
RECOMMENDED

Russia on Saturday announced its support for a cease-fire in Libya which was signed by putschist Gen. Khalifa Haftar after his militias faced heavy losses in recent days.

"We read the content of the Egyptian President's offer, of course, we support all kinds of offers to stop the conflicts in Libya as soon as possible," said Mikhail Bogdanov, special representative of Russia to the Middle East and African countries, according to the Ria News Agency.

Haftar and his allies gathered in the Egyptian capital Saturday to sign the Cairo Declaration.

The initiative calls for a cease-fire in Libya as of Monday and setting up a new organization to form the House of Representatives and the Presidential Council.

Bogdanov underlined that Russia was expecting this declaration.

Egypt Saturday announced a unilateral initiative to end the civil war in neighboring Libya, a plan that was accepted by Haftar, commander of the eastern forces that have suffered heavy losses in recent weeks.

Egypt's Abdel-Fattah el-Sissi told a news conference in Cairo that his initiative includes a cease-fire starting Monday and is meant to pave the way for elections in oil-rich Libya. He warned against continuing to look for a military solution to the country’s crisis.

"There can be no stability in Libya unless peaceful means to the crisis are found that include the unity and integrity of the national institutions," el-Sissi said. "The initiative could be a new start in Libya."

There was no immediate comment from the U.N.-supported government based in Tripoli. But a spokesman for the military forces allied with it said they would continue fighting to capture the city of Sirte, east of Tripoli, which Haftar's forces took in January.

Muhammad Qanunu said Tripoli-allied forces Saturday took control of the town of al-Washka east of the important port city of Misrata. "We did not start this war, but it is we who will determine when and where it will end," he said.

The conference in Cairo was attended by Haftar and Aguila Saleh, speaker of the Tobruk-based House of Representatives. Several foreign diplomats, including American, Russian, French and Italian envoys attended. Haftar and Saleh are allies.

There were no representatives of the Tripoli-based administration, or of its main backers, Turkey and Qatar, at the conference.

Egypt's initiative comes on the heels of Haftar’s major losses in western Libya and failure to carry on with a major offensive to seize control of Tripoli that Haftar launched in April last year.

The future of the conflict in Libya appears to be open to one of two scenarios: Either de-escalation or a full-blown proxy war with major regional and international powers involved in outright conflict.

It was yet to be seen whether the Tripoli-based Government of National Accord (GNA) will continue to press eastward to seize control of the vital oil installations, terminals and fields that tribes allied with Haftar shut down earlier this year. The shut-down paralyzed the country’s major source of income.

El-Sissi's plan also comes amid the backdrop of U.S. warnings against Russia's "fanning the flames" of the conflict, saying that it could deploy its own forces in Tunisia to deter the Russians from destabilizing North Africa.

It also remained to be seen what will happen if the GNA turns down Egypt’s olive branch. Heavier involvement by Turkey in Libya could propel Egypt to act defensively by getting more involved militarily in Libya.

El-Sissi, who has backed Haftar in the war, said the initiative included the formation of a presidential council in which Libya’s three regions would be represented. That council would rule the country during a one-and-a-half-year transition period followed by elections.

The plan also includes the unification of all Libyan financial and oil institutions, and the disbanding of militias, so that the so-called Libyan National Army (LNA) and other security agencies can “carry out their responsibilities,” el-Sissi said, without elaborating.

The Egyptian leader called for the withdrawal of all foreign fighters in Libya. Thousands of mercenaries, mostly from war-torn Syria, have been fighting on both sides of the war.

The United Arab Emirates, another main backer of Haftar, welcomed the initiative, saying the political solution was “the only acceptable option to reach the desired stability and prosperity” in Libya, according to state-run WAM news agency.

The chaos in the oil-rich country has worsened in recent months as foreign backers increasingly intervene, despite pledges to the contrary at a high-profile peace summit in Berlin earlier this year. Haftar's offensive on Tripoli has deeply polarized the already divided country and aborted U.N. efforts to hold a peace conference more than a year ago.

The military tide has been reversed in recent weeks. His forces lost almost all the territory they had gained since the beginning of the Tripoli offensive after Turkey increased its support to an array of militias loosely allied with the Tripoli-based government.

Libya has been in turmoil since 2011 when a civil war toppled long-time dictator Moammar Gadhafi, who was later killed.