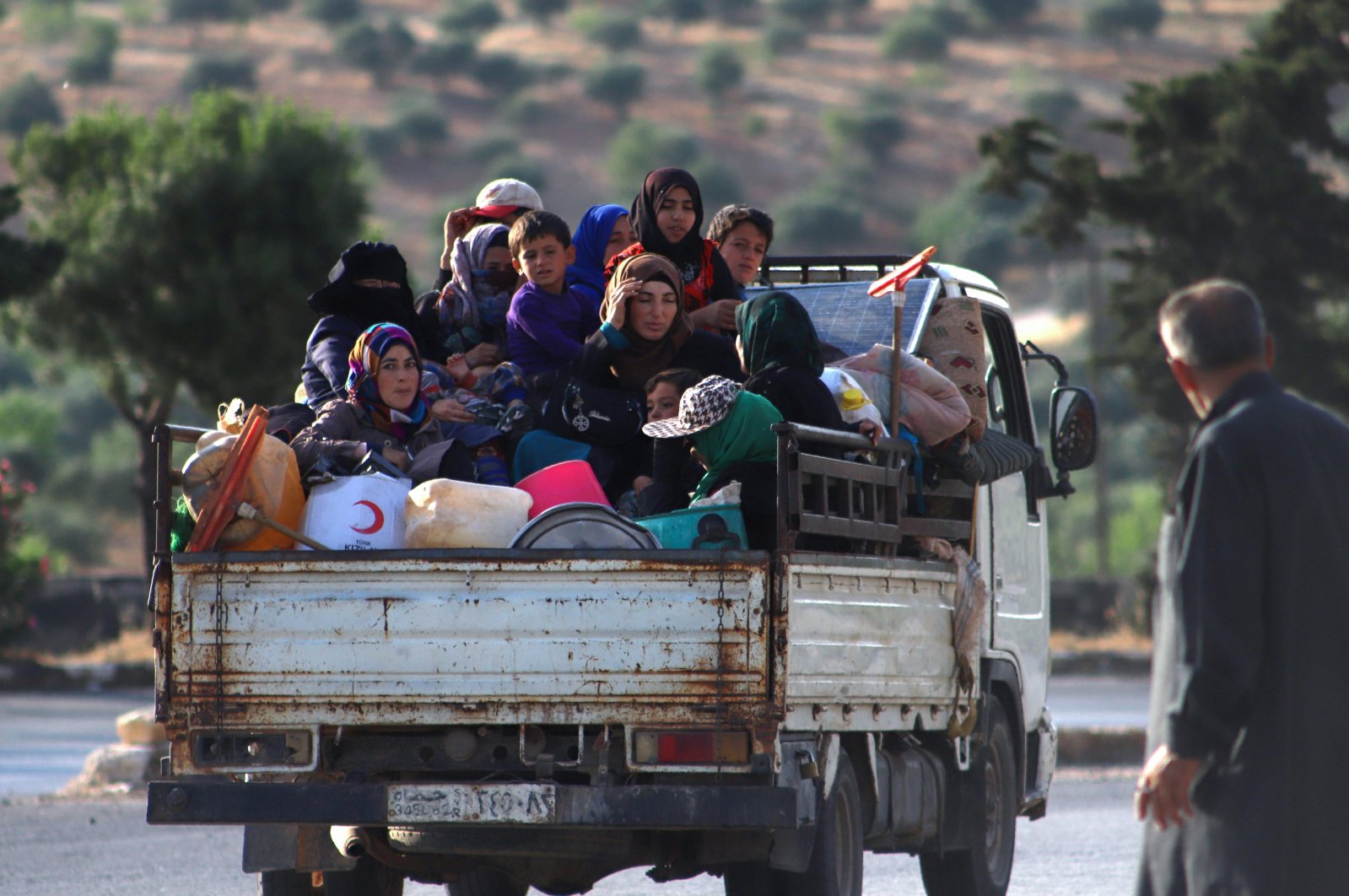 Displaced Syrians sit in the back of a truck loaded with belongings as they flee along the M4 highway, in Ariha in the opposition-held northwestern Syrian province of Idlib, June 8, 2020. (AFP Photo)
by DAILY SABAH Jun 09, 2020 12:26 pm
Edited By Dilara Aslan
RECOMMENDED

Russian airstrikes on Monday killed at least three civilians in Syria’s northwestern Idlib province, breaking a truce that has been holding steady for months, according to witnesses, local monitors and civil defense groups.

“Three people were killed today by Russian strikes on the Idlib countryside, and several others were injured by the artillery shelling,” the White Helmets civil defense group said Monday.

The Syrian opposition aircraft observatory said similarly that more than 20 airstrikes targeted two mountains and three villages in the Jabal al-Zawiya region and two other villages in the northwestern countryside of the province of Hama.

Furthermore, hundreds of civilians fled, fearing a wider resumption of airstrikes in Syria's last bastion of opposition, witnesses told Reuters. The Syrian Observatory for Human Rights also made a statement saying that Russian warplanes had launched around 15 predawn strikes on towns and villages in Idlib.

Idlib falls within a de-escalation zone forged under an agreement between Turkey and Russia. The area, located on the other side of Turkey's southern border, has been the subject of multiple cease-fire agreements, which have frequently been violated by the Bashar Assad regime and its allies.

In March, Turkey and Russia, the latter of which backs the Assad regime, announced a cease-fire that has been holding since then. The agreement came after the regime, with Russian backing, launched an offensive on Idlib in December causing an unprecedented humanitarian tragedy and the largest one-time displacement of civilians since the country's civil war first erupted in 2011, according to the U.N.

Even though around 270,000 civilians out of the million displaced due to Russian and regime airstrikes have since returned thanks to the relative calm provided by the cease-fire, after the latest incident the civilians have once more fled.

Assad has previously vowed to retake the last opposition stronghold, which now raises questions as to whether he will resume his deadly offensive on the province.

The war in Syria has killed more than 380,000 people and displaced nearly half of the country's prewar population since 2011.

The recent attacks displaced around 5,800 civilians in 24 hours in Idlib, according to Mohammed Hallaj, head of the Response Coordination Group in Idlib.

“Worrying signs of fighting escalating again. Today jets bombed villages in the Jebel al-Zawiya region (southern Idlib) & northern Hama in the first such airstrikes since a ceasefire signed 3 months ago. We must ensure that civilians are protected,” Mark Cutts, the United Nations deputy regional humanitarian coordinator for the Syria crisis wrote on Twitter late Monday.

The renewed displacement poses a major threat to health given the current global pandemic, as many seek refuge in areas near the Turkish border or in overcrowded tent camps which are often plagued by fires, sicknesses and a lack of basic necessities.

As the fight against the coronavirus continues around the world, vulnerable groups, particularly refugees, face greater risk due to the dire conditions at camps, making them potential hot spots for outbreaks. Displaced Syrians top the list of these vulnerable groups due to their large number and the country's collapsed infrastructure and health care system. According to the U.N., around 50% of health infrastructure was out of service in the region due to constant bombings and shelling.

In Syria's northwest, some 3 million people are trapped in a shrinking opposition stronghold battered by months of bombardment, especially in Idlib. Hundreds of thousands of people are crammed in overcrowded settlements teeming with fresh arrivals, while many others are forced to sleep in the open air amid freezing temperatures.