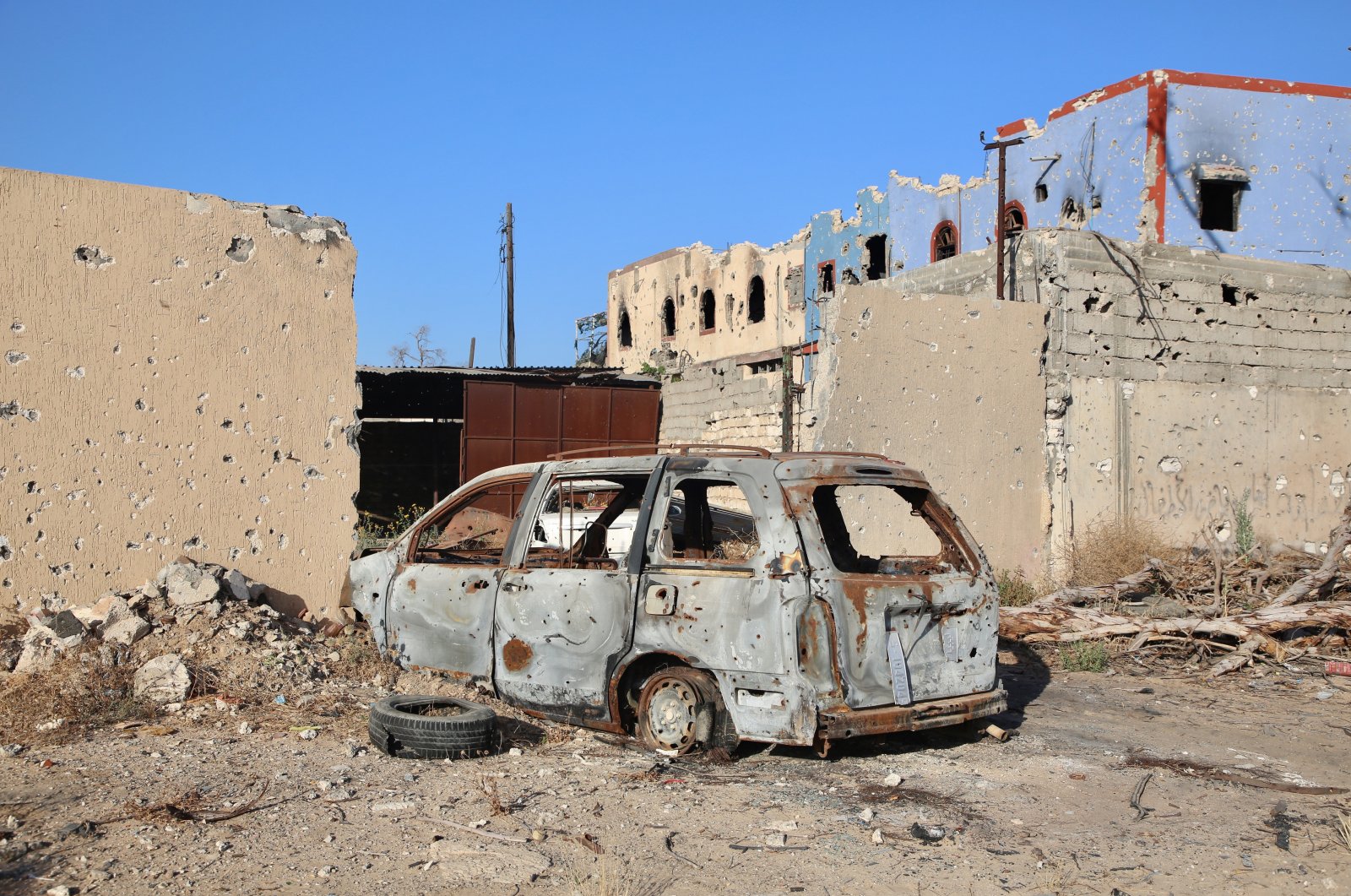 A car and buildings that were destroyed in attacks by forces loyal to putschist Gen. Khalifa Haftar in southern Tripoli, Libya, June 29, 2020. (AA Photo)
by DAILY SABAH WITH AA Aug 10, 2020 12:22 pm
RECOMMENDED

In May 2015, Daesh militants took control of the airport only weeks after seizing control of nearby Sirte. On June 4, 2016, pro-Libyan government fighters stated that they had captured the air base from the Daesh. In January 2020, Haftar forces said they had gained control of Sirte, including the Ghardabiya air base.

The Russian planes were military cargo planes. There were no details about what the cargo included, but Libyan Army officials suspect the planes were loaded with ammunition to provide military support to Haftar forces.

Libya has been torn apart by civil war since the ouster of late ruler Moammar Gadhafi in 2011. The government was founded in 2015 under a United Nations-led agreement, but efforts for a long-term political settlement failed due to a military offensive by forces loyal to warlord Haftar.

Since April 2019, Haftar's forces have launched attacks on the Libyan capital of Tripoli and other parts of northwestern Libya, resulting in thousands of deaths, including civilians. In the Libyan conflict, Haftar forces are supported by Russia, Egypt, the United Arab Emirates (UAE), France and several regional powers. On the other hand, the legitimate internationally recognized Government of National Accord (GNA) is mainly supported by Turkey and Qatar. The Libyan government has recently achieved significant victories against Haftar, pushing his forces out of Tripoli and the strategic city of Tarhuna.

Foreign mercenaries and arms have poured into the country, largely from Russia and the UAE, since Haftar launched his offensive. The U.S. military command for Africa (AFRICOM), on July 24 accused Russia of “playing an unhelpful role in Libya by delivering supplies and equipment to the Wagner Group.” Back in May, AFRICOM reported that at least 14 Mig-29s and Su-24s had been flown from Russia to Syria and previously provided photographic evidence that Wagner has laid landmines and improvised explosive devices (IEDs) in civilian areas in and around Tripoli.

Turkish Foreign Minister Mevlüt Çavuşoğlu last week said a "durable" cease-fire should mean that the GNA is able to spread its control to the east of Tripoli, in areas currently held by Haftar's forces.

That, he added, means being able to take control of the strategic port of Sirte, a gateway to the country's oil fields, and Jufra air base to the south. Haftar, he added, "still does not believe in a political solution and can attack ... Tripoli any time."

GNA forces have vowed to retake Sirte, the last major settlement before the traditional boundary between western Libya and Haftar's stronghold in the east.