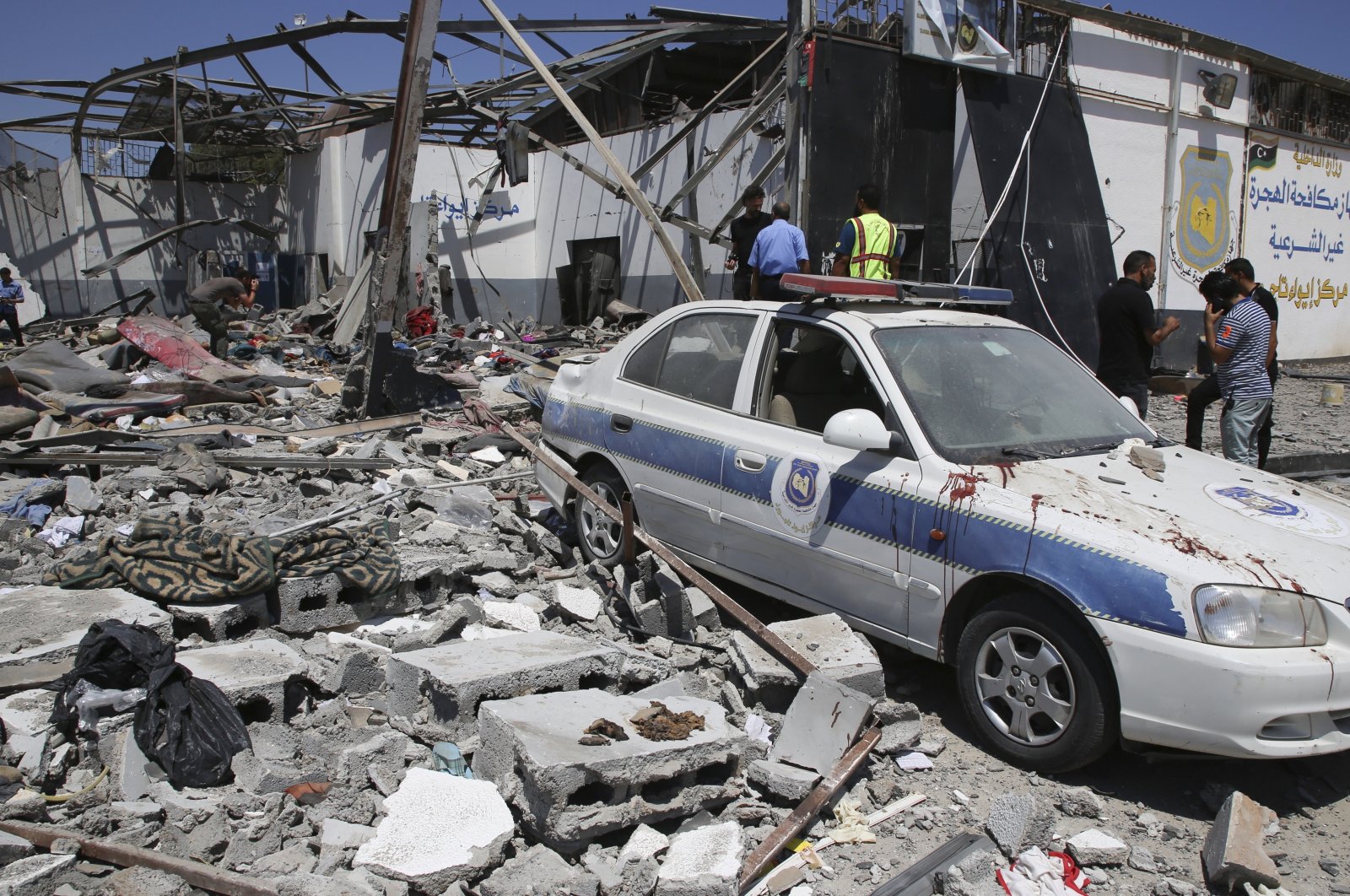 Debris covers the ground and an emergency vehicle after an airstrike at a detention center in Tajoura, east of Tripoli in Libya, July 3, 2019. (AP)
by Anadolu Agency Mar 23, 2020 11:35 am
RECOMMENDED

The Wagner Group, a Russian paramilitary company, met with the son of Libya's deposed ruler Moammar Gadhafi to bring him into power, Bloomberg claimed in an article Saturday.

The article penned by Samer al-Atrush asserted a relationship between Gadhafi's son Saif al-Islam and Russia.

According to the article, two Russian agents working for the Wagner Group were caught last year by Libya's U.N.-recognized Government of National Accord (GNA) in the capital Tripoli.

The documents stored in the hard disks of the captured Russian agents revealed that the agents met three times with al-Islam who was wanted by the International Criminal Court (ICC).

In the meetings, al-Islam claimed that 80% of the fighters loyal to the renegade putschist Gen. Khalifa Haftar are his supporters and if Haftar captured the capital, those fighters would support al-Islam, according to the notes of Russian agents.

Since the ouster of late ruler Gadhafi in 2011, two seats of power have emerged in Libya: Haftar in eastern Libya, supported mainly by Egypt and the UAE, and the GNA in Tripoli, which enjoys the U.N. and international recognition.

In one of the meetings, al-Islam and Russian agents discussed the training of social media experts to create a group of specialists who would share messages over social media.

Russian agents noted down that al-Islam was very interested in counter-propaganda.

According to the notes of the last meeting seen by Bloomberg, al-Islam would give Russians the list of commanders loyal to him in the next meeting.

Additionally, it was claimed that one of the advisers of al-Islam admitted to the meetings.

According to the article, the adviser said that although al-Islam and his supporters wanted to develop good relations with the Western countries, the Russians were the first to help them.

Russia's Wagner Group is one of the most controversial groups among the world's mercenaries. It is owned by Yevgeny Prigozhin, a businessman with close links to Russian President Vladimir Putin.

According to Bloomberg, it was reported that the Wagner Group, which contributed over 1,000 militia forces to Libya, brought Russian pilots who carried out training activities for Haftar's troops, and Russian Sukhoi-22 type warplanes could be seen in Libyan skies.

Haftar calls the group he leads the "Libyan National Army" and wants it to be treated as an official army. In fact, Haftar's armed forces work like a "dealership" and try to gather all militias under one roof.

A large number of militias from Libyan tribes in the east and west have joined their ranks. Others who have joined the putschist commander include members from the public committees established by former ruler Gadhafi, the extremist Madkhali Salafists, Janjaweed militias of Sudan – who have a very controversial history in Sudan – the rebels in Chad, Russian mercenaries, and military officers from Egypt, the United Arab Emirates and France.

It is claimed that the force comprises 25,000-30,000 militias, including trained military personnel of 7,000. The Brigade 106, the largest and best-armed among them, is commanded by Saddam Haftar, the commander's son.

The rallying cry for the brigade is Khamis, the name of one of the sons of Gadhafi.