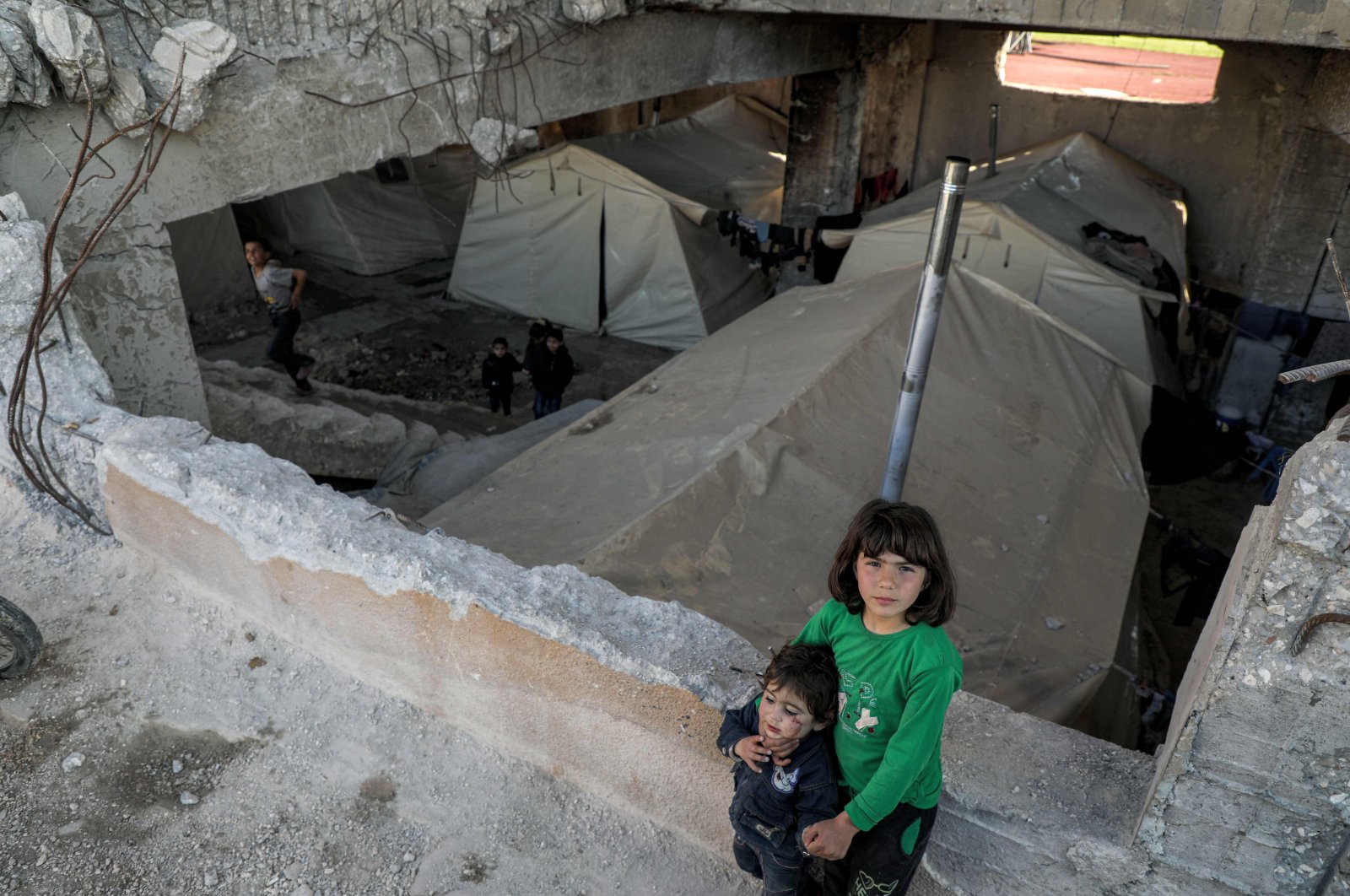 Syrian children displaced by the war stand in a makeshift camp at an Idlib football stadium on March 3, 2020, in the city of Idlib in northwestern Syria. (AFP Photo)
by DAILY SABAH Mar 11, 2020 11:39 am
Edited By Dilara Aslan
RECOMMENDED

To save lives and minimize the suffering of those impacted by the ongoing civil war in Syria’s northwest following the recently renewed assault of the Bashar Assad regime, support from all stakeholders is now urgently needed to enable the humanitarian community to strengthen their capacity to respond, the U.N. Office for the Coordination of Humanitarian Affairs (OCHA) said Tuesday.

The U.N. and its humanitarian groups are scaling up their response efforts to address the needs of hundreds of thousands of people who are newly displaced due to hostilities in northwest Syria, OCHA said in a written statement.

Nearly a million people have been displaced in a three-month-long Russian-backed offensive by Syrian regime forces in northwest Syria, with the U.N. describing it as the worst humanitarian emergency since the start of the Syrian civil war in 2011. After the efforts of Turkey, a cease-fire was established in the last opposition stronghold Idlib last week in talks with Russia.

Of the newly displaced, around 81% are women and children and most of the men in the remaining 19% are elderly, vulnerable or living with disabilities.

The U.N. and Turkey had warned frequently that the latest assaults of the regime would end in another major refugee wave, yet the international community remained silent in the face of the hundreds of people killed by the regime, giving it yet more confidence to advance in its attempt to regain territory by force.

“To facilitate the scale-up of resources and cooperation necessary to respond to additional humanitarian needs over the next six months, an updated intercluster humanitarian readiness and response plan for north-west Syria was issued on 21 February,” OCHA said, adding that estimates are that $500 million is required to meet the needs of 1.1 million women, children and men who are now displaced or at imminent risk of displacement for the next six months.

Warning that the humanitarian conditions continue to deteriorate in the region, OCHA underlined that civilians are increasingly reliant on assistance just to survive, including for shelter, food, water, health care and nonfood items such as fuel and sanitation services.

“With military operations intensifying in Idlib and Aleppo governorates, civilians in areas that were until recently receiving internally displaced persons (IDPs) have begun fleeing as well, from areas such as Sarmin, Atareb, Taftanaz, Binnish, Ariha and Idlib province to areas further north, close to the Turkey-Syria border,” OCHA continued.

Due to clashes on the ground in populated areas, civilians are displaced time and again into increasingly smaller areas. Each new displacement makes people more vulnerable, as they lose access to their existing livelihoods, services and networks, the statement said.