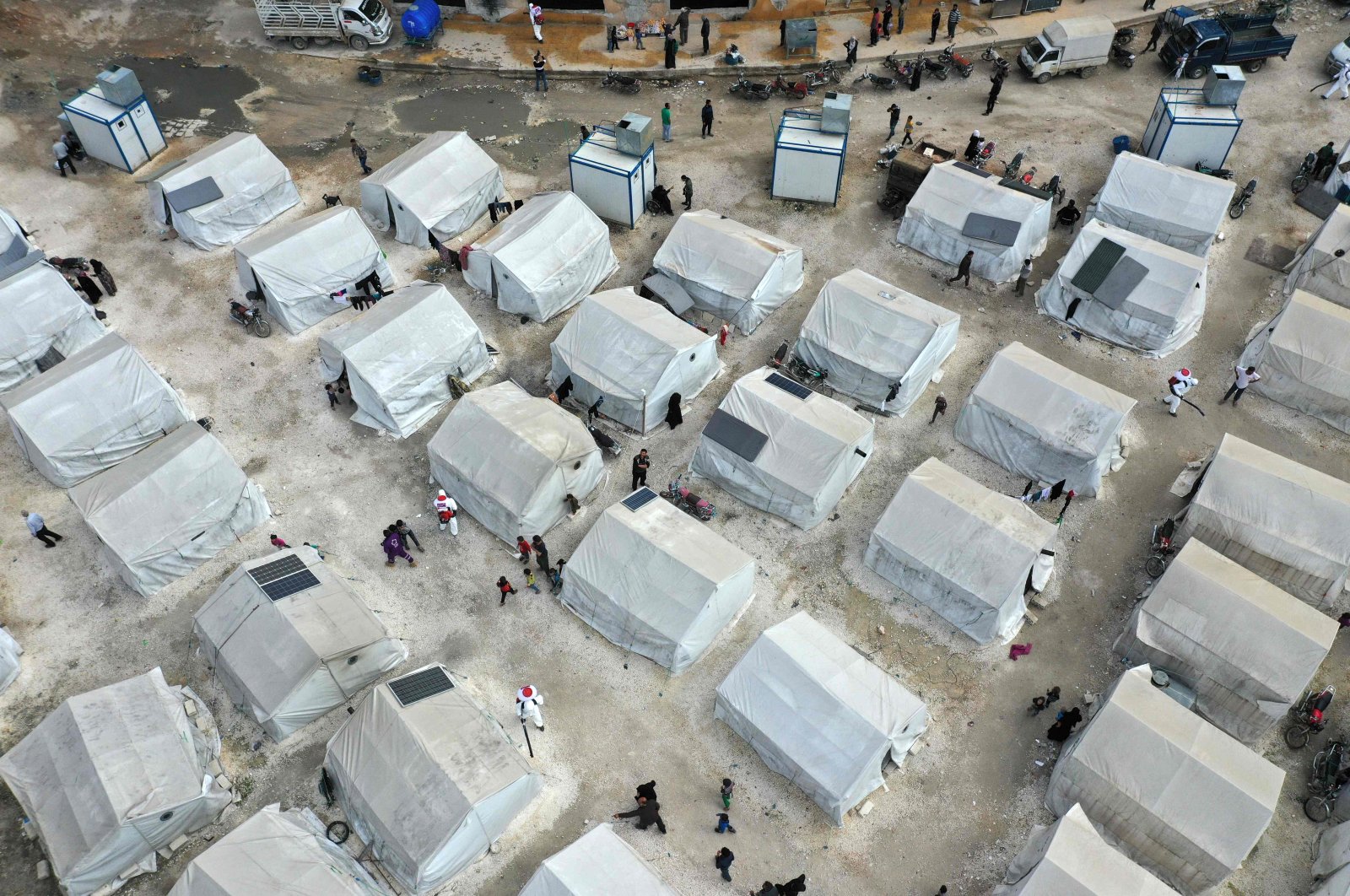 A drone image taken on April 9, 2020, shows sanitation workers disinfecting a camp for displaced Syrians next to the Idlib municipal stadium in the northwestern Syrian city, during a campaign to limit the spread of the coronavirus pandemic. (AFP Photo)
by DAILY SABAH Apr 14, 2020 1:12 pm
Edited By Dilara Aslan
RECOMMENDED

Syria's White Helmets civil defense group has disinfected 693 camps as part of its efforts to combat the coronavirus outbreak in war-torn Syria, where hundreds of thousands of people are at high risk due to poor and unhygienic living conditions.

The White Helmets wrote Monday on Twitter that “693 camps, inhabited by hundreds of thousands of civilian, displaced from their homes as a result of the Russian and (Bashar Assad) regime military campaigns, were sterilized as part of the sterilization campaign launched by the Civil Defense on March 18 to prevent #CoronaVirus."

The civil defense group is also continuing to build further camps in northern Syria while work is also underway in Aleppo to prepare the ground as a foundation for a camp that can accommodate 400 families of displaced Syrians.

Damaged health infrastructure and massive displacement due to attacks by the Assad regime and Russia make potential containment measures in the region a nearly impossible task.

Yearslong sieges caused the deterioration of the physical health of many people, who suffer from malnutrition and widespread poverty. Another risk is that many people live in overcrowded places and camps – ideal for the spread of the virus. The camps are generally in poor conditions with a lack of access to water, hygiene facilities, medical aid and food.

“Many poor people, migrants & refugees live in overcrowded conditions with few resources & little access to health care. Physical distancing is very difficult in such situations, so other public health measures must be put in place & protections extended for the most vulnerable,” World Health Organization (WHO) Director-General Tedros Adhanom Ghebreyesus warned on Twitter on Monday.

The risk of an outbreak is especially high and most alarming in Syria's northwest, where some 3 million people are trapped in a shrinking opposition bastion battered by months of bombardment, especially in Idlib province. With close to a million people displaced since December by a Russian-backed regime offensive on the Idlib region, overcrowded settlements are teeming with fresh arrivals and many of the displaced are forced to sleep in freezing temperatures in open spaces.