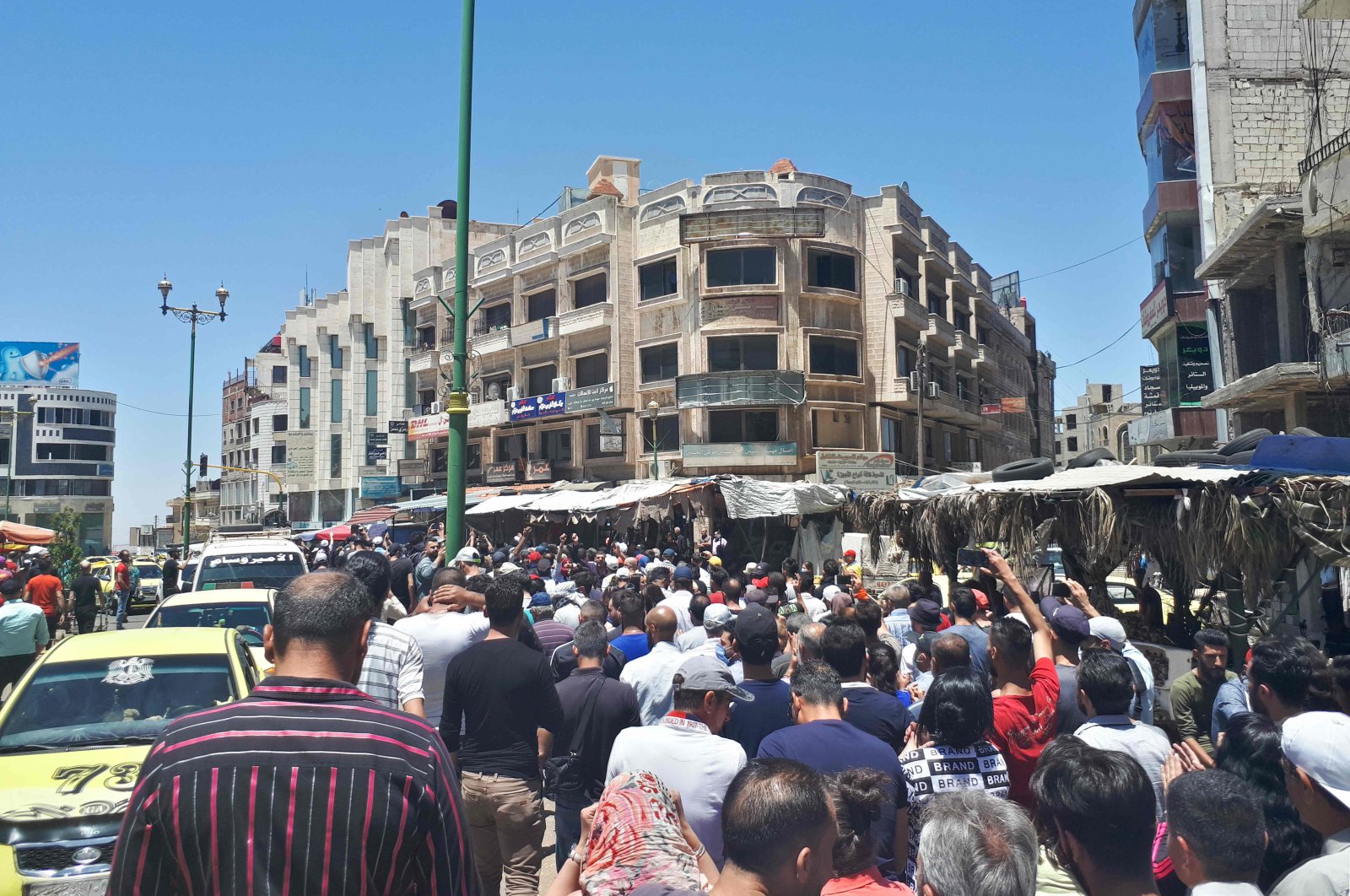 The Assad regime, which has managed to maintain a tight grip on Syria despite almost a decade of conflict, faces one of its biggest economic crises since the civil war erupted

In scenes not witnessed for years in regime-controlled parts of Syria, dozens of men and women marched through the streets this week, protesting a sharp increase in the cost of basic goods and the collapse of the national currency, some even calling for the downfall of Bashar Assad.

With the world focused on combating the global coronavirus pandemic, the Syrian regime has struggled to hold up the economy. After nearly a decade of war, the country is crumbling under the weight of yearslong Western sanctions, regime corruption, infighting, a pandemic and an economic downslide made worse by the financial crisis in Lebanon – Syria’s main link with the outside world.

“He who starves his people is a traitor,” some of the protesters chanted at the protest in the southern city of Sweida.

Syria faces near-complete isolation as the toughest U.S. sanctions yet start to come into effect next week. While Assad may have won the military war against his opponents with the help of allies Russia and Iran, he now faces an even bigger challenge of governing while more than 80% of his people live in poverty.

“It's remarkable that after all the protesters and perceived opponents whom Assad's government has shot, tortured and executed, Syrians are again taking to the streets to protest corruption and economic mismanagement by Assad and his entourage,” Kenneth Roth, executive director of the Human Rights Watch wrote on Twitter Sunday. He added that Syrian protests against the Assad regime’s corruption and economic mismanagement have become so intense that the authorities hid a statue of Assad's father behind a police station out of fear that protesters would attack it.

Charles Lister, director of the Extremism and Counterterrorism Program at the Middle East Institute, this week wrote in POLITICO magazine that for the first time in nearly a decade, the millions of Syrians who outwardly support Assad or who have remained quietly loyal to his rule have begun to share whispers of their own exasperation. He said that Assad, a dictator who managed to survive nearly a decade of rebellion and civil war by suppressing dissent and exploiting the support of Russia and Iran to keep his grip on a burning country, may have crushed a large part of the opposition, but “in 2020, every single root cause of the 2011 uprising is not just still in place, but has worsened.”

In regime-held areas, prices go up several times a day, forcing many shops to close, unable to keep up with the chaos. This week the Syrian currency dropped to a record 3,500 pounds to the U.S. dollar on the black market — compared with 700 at the beginning of the year. Some staples such as sugar, rice and medicine are becoming hard to find.

As the regime has proven not to be able to control the Syrian pound anymore, several regions in northern Syria have reportedly been switching to using the Turkish lira. Turkish lira notes were already in circulation in some of the areas in northern Syria, which had been liberated from terrorist organizations by the Turkish military and Syrian opposition groups. Coins are said to have started coming in from Turkey over recent days, with photos circulating on Twitter and showing coins in what was said to be a branch of the Turkish Post and Telegraph Organization's (PTT) in the northwestern Azaz district.

“In order to protect citizens' savings due to the rapid depreciation of the Syrian (pound), we intensified our negotiations with the relevant Turkish authorities and took the first step in the process of launching small TL banknotes, which are vital in daily life, in the north of Syria,” Abdurrahman Mustafa, head of the Syrian Interim Government and the Syrian Turkmen Assembly, said on Twitter.

The pain is likely to grow under the new U.S. sanctions, which Washington says aim to punish Assad and his top lieutenants for crimes committed during the country’s conflict. The new authority, known as the U.S. Caesar Syria Civilian Protection Act, allows foreign companies to be targeted, including in neighboring Lebanon, Jordan and Iraq.

Effectively, the sanctions prevent anyone around the world from doing business with Syrian officials or state institutions or participate in the war-ravaged country’s reconstruction.

The U.S. Embassy in Syria last week declared its support for the country's people protesting the rule of the Assad regime.

After the Assad regime in Syria recently called U.S. sanctions against the country “economic terrorism,” the United States responded, saying that it was the regime’s destructive war against its own people and the targeting of vital facilities that wrecked the country’s economy.

“Bashar al-Assad and his regime can’t cover up the truth – for more than nine years they have waged a bloody war against the Syrian people, destroying homes, schools, shops and public markets. The regime’s destructive war has crushed the Syrian economy, not U.S. or EU sanctions,” the U.S. Embassy in Syria stated last week.

The European Union renewed its sanctions against the Assad regime and his top political officials, military officers and businesspeople over the group's continued crackdown on civilians in the conflict-torn country last month saying that sanctions would be extended until June 1, 2021, "as the repression of the civilian population continues."

Syria's war has devastated the country's economy since 2011, plunging 80% of its people into poverty, according to the United Nations. Despite relative quiet in the country's remaining battlefields, early 2020 has only seen the situation worsen.

Bread prices increased nearly 60% in the opposition-held northwestern province of Idlib, even though the territory with a population of over 3 million is not included in the new sanctions. Its population, many of them unemployed and living in displaced camps, have also been hit hard by the collapse of the pound since it is the main currency used in Idlib.

The situation of the people in Idlib worsened when the Assad regime backed by Russia launched an offensive on the province, causing the largest one-time displacement in the history of the Syrian civil war and a huge humanitarian tragedy, according to the U.N.

Frequent bombings and shelling have led to nearly 50% of health facilities to be out of service, just as the Syrian people need them the most amid the coronavirus pandemic. Living in overcrowded tent camps or even out in the open in safe areas near the Turkish border, many are struggling to meet even basic needs.

Despite a March cease-fire brokered by Ankara and Moscow, this week also saw Russian warplanes carry out the first airstrikes on Idlib and the surrounding area in three months, in which at least three people were killed.