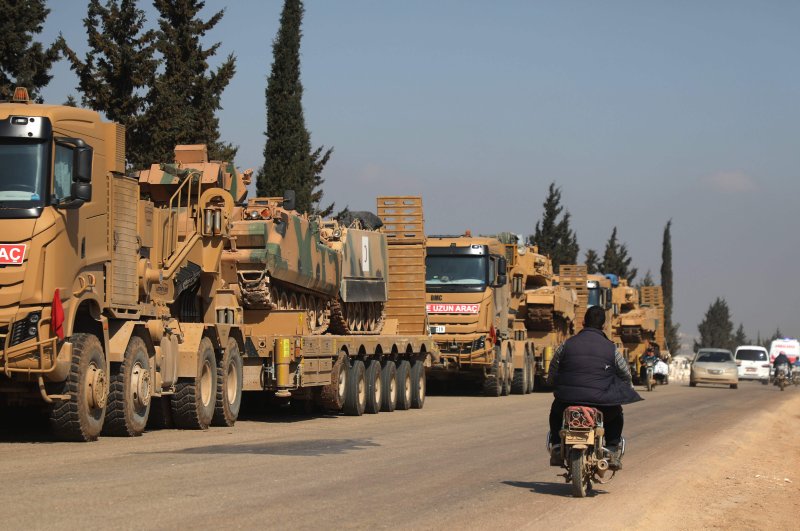 A convoy of Turkish military vehicles is pictured near the town of Hazano in the rebel-held northern countryside of Syria's Idlib province, March 3, 2020. (AFP)
by DAILY SABAH
Mar 03, 2020 3:12 pm

Following Turkey’s official declaration of Operation Spring Shield on Sunday, some Syrian refugees started to move toward Turkey’s southern border in hopes of joining Turkish forces and helping with the offensive against the Bashar Assad regime.

Some Syrian refugees, mostly young men living in Turkey’s northern Samsun province, gave a petition to the Turkish military recruiting office to volunteer in the operation.

Expressing their sorrow over the death of Turkish soldiers who were killed in regime attacks, the Syrians said they are willing to go to fight with Turkey against the regime.

“We have been very saddened for the martyrs. I have called on my friends, told them that those soldiers have been killed in our home country. Therefore, we gave a petition to be recruited. Whenever they need our support, we would go to war,” said Muhammed Abdurrahman, one of the refugees who volunteered.

After signing the petition, some refugees moved to the Cilvegözü border gate in the southern Hatay province to join the Turkish soldiers.

According to DW Turkish, almost 100 young refugee men have crossed the border to join the war since Sunday – a rare contrast to the many influxes of Syrian refugees who have come to Turkey to seek safety. Encountering almost no obstacles, the refugees receive an exit document from the border guards and return to Syria without any reported problems. However, because they received an exit document, they will not be able to return to Turkey for the next five years.

Turkey on Sunday launched Operation Spring Shield after at least 36 Turkish soldiers were killed and dozens injured in an Assad regime airstrike in Idlib, a de-escalation zone in northwestern Syria, just across Turkey's southern border. Turkey's only targets during the operation were Assad regime troops and equipment in Idlib under the nation's right to self-defense, Akar said.

But more than 1,300 civilians have since been killed in attacks by the Assad regime and Russian forces in the zone, as the cease-fire continues to be violated, sending about a million refugees toward Turkey's border with Syria.