Syrians in opposition areas welcome US sanctions against Assad, worry about economy 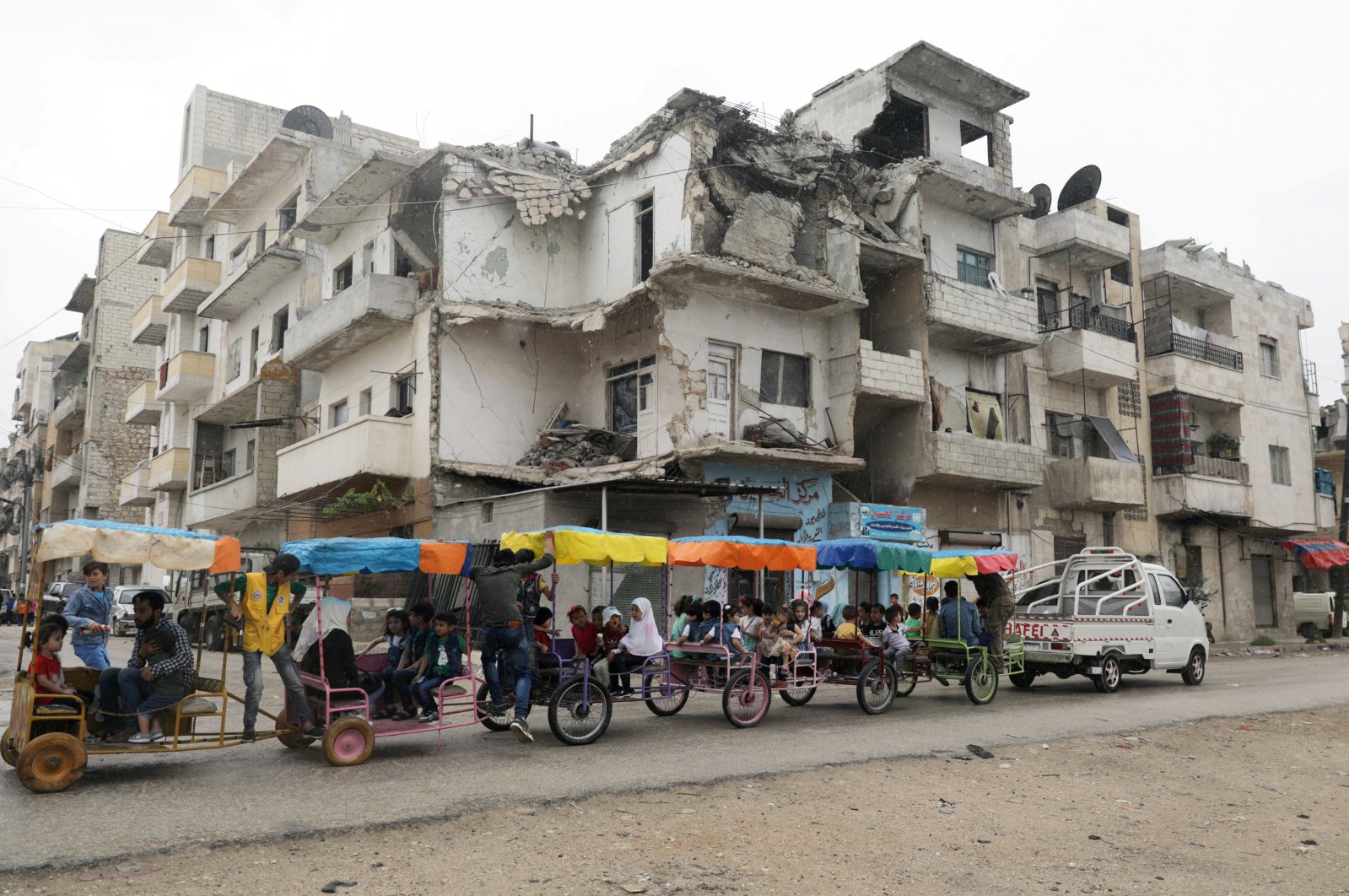 Children ride in carts past a damaged building on the first day of the Muslim holiday of Eid al-Fitr amid the global outbreak of the coronavirus, in the opposition-held Idlib city, northwest Syria, May 24, 2020. (REUTERS Photo)
by Compiled from Wire Services Jun 18, 2020 12:29 pm
RECOMMENDED

In the last bastion of the opposition against Bashar Assad, Syrians who fled his rule see new U.S. sanctions as a step in the right direction but say they must be shielded from any fallout as the currency crumbles.

The toughest U.S. sanctions yet against Damascus came into effect on Wednesday under the Caesar Act, named after a Syrian military photographer who smuggled thousands of photos out of Syria showing mass killings, torture and other crimes.

The Caesar Act punishes under U.S. law any company that works with Assad, casting a cloud over efforts to rebuild Syria.

"It's a good decision. But what's important is that we don't get affected by it," said Baker al-Ali, 30, in the opposition-held Idlib region of the northwest.

"Today all the prices are irrationally high."

Already battered by nearly a decade of war, the Syrian pound has collapsed in the last month, with dealers citing the impending sanctions as one of the factors driving demand for hard currency, along with a financial collapse in neighboring Lebanon.

While the northwest corner falls outside Assad's rule, the Syrian pound is still used there. This month the pound has sunk to 3,000 to the dollar from 47 in 2011 when the conflict began.

The United Nations Office for the Coordination of Humanitarian Affairs (OCHA) says the halving of its value since May has pushed the price of basic goods to record highs and further out of reach of the 4 million people in the northwest, where many Syrians fled as Assad recovered territory from the opposition.

Syria has already been under U.S. and European Union sanctions, but the new sanctions are more sweeping.

They exempt imports of essential food and humanitarian items but increase scrutiny of aid to ensure it does not benefit Assad's regime.

"The economic situation here cannot bear yet another rise in prices. The (sanctions) should keep civilians out of harm's way," said Yusef Ghraibi, 24.

In regime-held areas, too, the currency's collapse is biting hard.

"The prices of shoes increased 10,000 (pounds) from yesterday to today," said Abdulrahman Jlelati in Aleppo.

The U.N. special envoy to Syria warned this week of a "dramatic collapse in economic conditions throughout the country."

Western states want to see progress toward a political transition in Syria before they will help rebuild the country.

Damascus says the new sanctions breach all international norms and are part of an economic war.

The first batch of designations targets 39 people or entities, including Assad personally as well as his wife Asma Assad – the first time she has been hit by U.S. sanctions.

Under the law, any assets in the U.S. will be frozen. Assad has been under U.S. sanctions since he began to crush an uprising in 2011.

Assad, backed by Russia and Iran, has succeeded in winning back most of Syria after a war that has killed more than 380,000 people and saw the rise of the extremist movements.

"We anticipate many more sanctions and we will not stop until Assad and his regime stop their needless, brutal war against the Syrian people," Secretary of State Mike Pompeo said in a statement, vowing a "sustained campaign of economic and political pressure."

Pompeo said the goal was to force Assad into accepting Security Council Resolution 2254 of 2015, which called for a cease-fire, elections and a political transition.

A U.N.-driven process has made no headway, with Assad last year launching a major offensive backed by Russian airpower to retake Idlib, the last major opposition holdout.

The European Union has imposed its own sanctions over Syria, and a French court separately on Wednesday convicted an uncle of Assad over money-laundering and misappropriation of government funds.

At the United Nations, Germany and Belgium on Wednesday sent a draft resolution to the Security Council extending the authorization to cross the Syrian border by one year in order to deliver humanitarian aid.

The measure states that more than 11 million people in Syria "require humanitarian assistance" and that authorizing border crossings "remains an urgent and temporary solution to address the humanitarian needs of the population."

In January authorized border crossings into Syria were cut from four to two, both on the border with Turkey.

The draft resolution also calls for "an exception" to allow the use of a border crossing on Syria's border with Iraq for six months to send aid benefitting some 1.3 million people in the region.