'There is nothing now': Syrians in Idlib fear end nearing 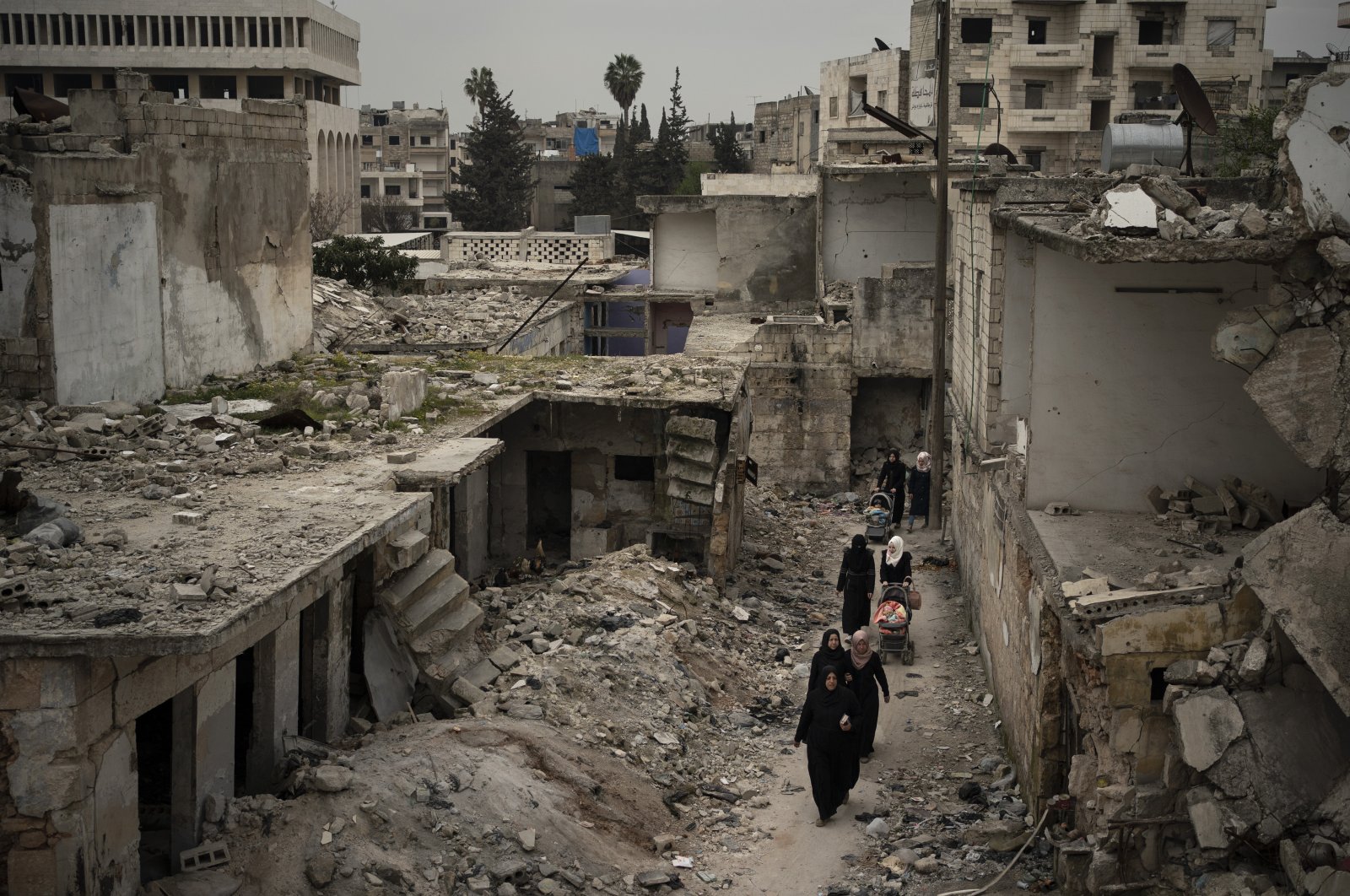 "There’s nothing now. Nothing at all,” said Yasser Aboud, as he looked away from his family’s few remaining belongings, dumped on the floor of the bare single room that would now be their home in the northwestern Syrian province of Idlib.

It was a far cry from the house, the farm, and the job that he, his wife and three children left behind two months ago, fleeing their hometown just 15 kilometers (9 miles) down the road as it was overwhelmed by Syrian regime troops in furious fighting. He managed to salvage some jerrycans of olives, a few rugs, cushions and pots and pans, and his motorbike. They sold their washing machine and some of his wife’s gold.

Now they were moving into an apartment in a district full of buildings shattered by regime bombardment. He and his wife and three kids will share the place with over a dozen relatives. They’re jobless in a city teeming with thousands of others displaced like them – and they are hardly out of danger.

The city of Idlib is the last urban area still under opposition control in Syria, located in a shrinking opposition stronghold in the northwestern province of the same name. Syria’s civil war, which entered its 10th year on Monday, has shrunk in geographical scope – focusing on this tiny corner of the country – but the misery wreaked by the conflict has not diminished.

A bloodier and possibly more disastrous phase is on the horizon if regime forces, backed by Russia and Iran, go ahead with threats to recapture Idlib city and the remaining opposition-held north, crammed with over 3 million people.

Over the past three months, regime troops recaptured nearly half of Idlib province and surrounding areas, forcing nearly 1 million to flee their homes, around half of them into other parts of the province, including Idlib city. During the advances, regime forces neared Idlib city outskirts, bombing parts and sending thousands fleeing north.

“I feel everything has ended, and this is a final migration, not displacement,” Aboud said. “I feel let down by the world,” he added.

The regime offensive has been paused by a Turkish-Russian cease-fire deal, leaving residents of Idlib, including Idlib city, in a state of terrifying limbo. They are skeptical that the cease-fire will last and well aware they are likely the next target of the regime’s assault.

Though regime airstrikes have hit it regularly, the city has suffered far less violence than other places since 2015, when opposition seized it from regime forces. Over the years since, multiple waves of displaced people flowed in, from other opposition areas further south retaken by the regime, and now more from other parts of Idlib.

The Associated Press traveled to Idlib on a trip arranged through Turkish authorities. Its team, like other journalists who have been into the province recently.

Driving into Idlib city, the AP team witnessed the scale of the displacement. Dozens of tents lined the main road into the city. Other families were crammed into bombed-out buildings, the city’s stadium or unfinished construction sites. Shops have sprung around the province bearing the names of different cities and towns in Syria – a testimony and a token to the homes they left behind.

The city has been shaped by different layers of conflict. Many city streets are clean and well maintained by the opposition administration. But on other streets, buildings are in ruins – some wrecked in previous fighting, others bombed during the most recent offensive. Residents can point out buildings and remember the date they were hit. The city gets only two hours of electricity a day, and Aboud said he chose to buy bread over more power from generators.

If Bashar Assad resumes the regime offensive, everything here will be vulnerable.

In past advances, the regime’s tactic was to bombard urban areas relentlessly – including with Russian warplanes – flattening residential areas and pummeling the population into submission. Residents, opposition activists and fighters were offered the choice either to stay under “reconciliation” deals or be evacuated to the opposition-held north.

In Idlib, the residents overwhelmingly fear living under regime rule but have nowhere else to run, with Turkey refusing to open its border wall to more refugees.

Turkey currently hosts 3.7 million Syrian refugees, more than any other country in the world.

The country has been praised by many officials for its efforts to assist disadvantaged peoples, especially Syrian refugees.

Aboud said it was out of the question for him to accept “reconciliation.” Holding his 2-year-old twins by the hand, he said his family fled his hometown of Saraqib “not fearing death but fearing to be under the rule of Assad again.”

He took part in the early anti-regime protests in 2011 and was detained for it; two of his brothers were shot and killed by regime forces in 2012; his mother-in-law was killed in an airstrike the same year.

If Assad captures Idlib, “we will run to Turkey, we will sleep under the (border) wall,” Aboud said. “The most crucial thing is that we won’t enter territories” held by the regime.

Turkey has deployed thousands of troops in the province, operating alongside its Syrian opposition allies.

Mustafa Berro, a commander of a Turkey-backed opposition faction from Aleppo that has now sent forces to Idlib, said his fighters have not lost faith.

“We are worse off than in 2014” – when opposition-held nearly half of Syria – “but we are better off than 2011” when they had no territory to control, he said. “We still have an area to work from and operate in,” he added.

The massive displacement of past weeks has strained international aid deliveries into the province, where 1.5 million receive food assistance. In January alone, 1,227 trucks were sent across the border from Turkey, the largest number in seven years of cross-border operations, said U.N. Assistant Secretary of State Kevin Kennedy, who is also the regional humanitarian coordinator for Syria.

The cease-fire has allowed deliveries to increase, but Kennedy warned that resumption of hostilities in the densely populated urban area would mean more displacement. “The needs are so enormous, the gaps will always be there, unfortunately,” he said.

At Idlib’s Central Hospital, Abdullah al Hassan lay in a bed in excruciating pain. He lost both legs last week when he went back to his village, Afes, to inspect the home he had fled and stepped on a mine planted in the house. His hand was also bandaged and his face full of cuts.

Afes, on the strategic highway that was the regime’s first main objective in its offensive, was all but destroyed and totally deserted, he said. His house had been looted, even metal wires stripped out. The carnage will be similar if the offensive hits Idlib city, he said.

“No one can stay once such an attack comes. Everyone must leave. If anyone stays, (regime forces) won’t spare him,” he said.

In the center of Idlib city, nearly 90 displaced families found refuge in a deserted prison. They fled here from Maaret al-Numan, a key town in Idlib that fell to regime forces in January.

“We couldn’t afford the rent. We opened the door of the prison and we came in,” said Hossam Ajjaj, member of the Turkish-backed Syrian National Army who was among the first to move in with his family.

Families, men and women, live on top of each other in the prison rooms, divided into sleeping, cooking and bathing areas by hung sheets and blankets, giving a deceptive sense of privacy.

Fida, 44, and her 20-year old daughter Heba share the same room with 11 other relatives. On the day the AP visited, they were stuffing zucchini and eggplants in their living area, where they also cook and bathe – taking turns keeping watch to ensure no one intrudes. A younger brother of Heba who lost a foot in a war injury slept in the room behind the “kitchen.” A baby with Down syndrome slept in his cradle next to the women cooking.

They had long resisted fleeing their home, just outside Maaret al-Numan. Early in the war, when Heba was 12, they left for six months but returned. Earlier in 2019, they were displaced for 20 days but again went back. When the Syrian regime advanced on Maaret al-Numan in December, they moved into caves just next to their home, hoping it was again just temporary.

When an airstrike hit just outside the cave, they knew they had to leave. They gave up their large farm growing olives and grapes to live crammed in a prison.

“We don’t like the word displacement,” Fida said. Her daughter added: “It’s shameful. We like our hometown.”

Heba said she can’t forget a single day since 2011 – every day marked by violence and loss. She worried about her children, a 3- and a 2-year-old, and can’t let them go outside because of airstrikes.