TRT World to air documentary on neo-Nazis in Greek Cyprus 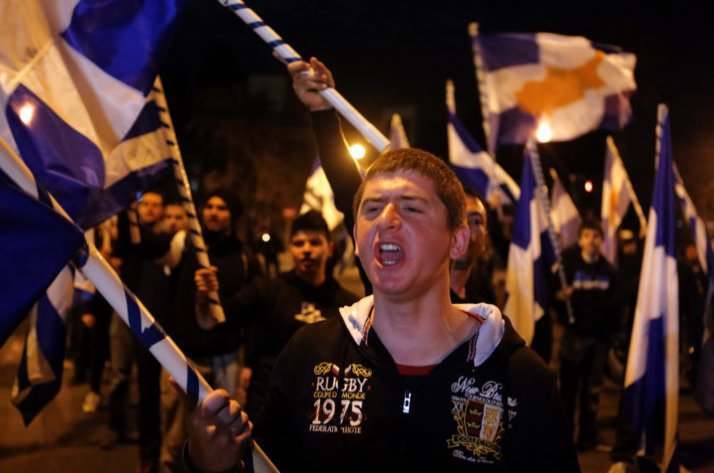 Members of the fascist ELAM Party (National Popular Front) shout slogans and wave flags during a protest against measures imposed on the banking sector outside the Greek Cypriot parliament in Nicosia, March 28, 2013. (AFP Photo)
by DAILY SABAH Jul 20, 2020 3:19 pm
RECOMMENDED

Public broadcaster TRT World announced Monday that it will soon air a documentary centered on a far-right movement active in the territory ruled over by the Greek Cypriot administration.

“TRT World brings you this hard-hitting documentary that sheds light on far-right groups in Greece and Greek-administered Cyprus,” the TV channel said on its official Twitter account.

“From indoctrination to militarization, these neo-Nazis are leaving behind them nothing but a trail of violence,” it added.

The channel also shared a teaser of the documentary, in which Greek locals, possibly nongovernmental organization (NGO) officials or academics, are seen commenting on the fascist movements.

“We have a fascist problem in Cyprus,” a local is seen saying in the video. “We have ELAM (National Popular Front), which is a real fascist organization – they are Nazis,” he said.

Another local also pointed out the danger posed by the movement.

The last local seen in the teaser also touches upon the racist movements in both Greece and the Greek Cypriot administration.

“ELAM is a branch essentially of the Greek neo-Nazi group Golden Dawn and it seems to be expanding and spreading like a virus,” he says.

Founded in 2008, ELAM became a political party in 2011. It is known for its rallies against Turkish Cypriots and migrants. It has close ties with Greece's far-right Golden Dawn. Its first known attack was in 2010. In 2014, ELAM members disrupted an event attended by Mehmet Ali Talat, the former TRNC president.

The group's four members were jailed after an attack on a Turkish Cypriot band performing at a concert on the Greek Cypriot side of the island in 2011. Four convicts were released on Monday, hours before the attack on Turkish Cypriots took place at the border crossing.

On the other hand, Greece’s Golden Dawn party is considered a far-right, neo-Nazi and fascist organization.