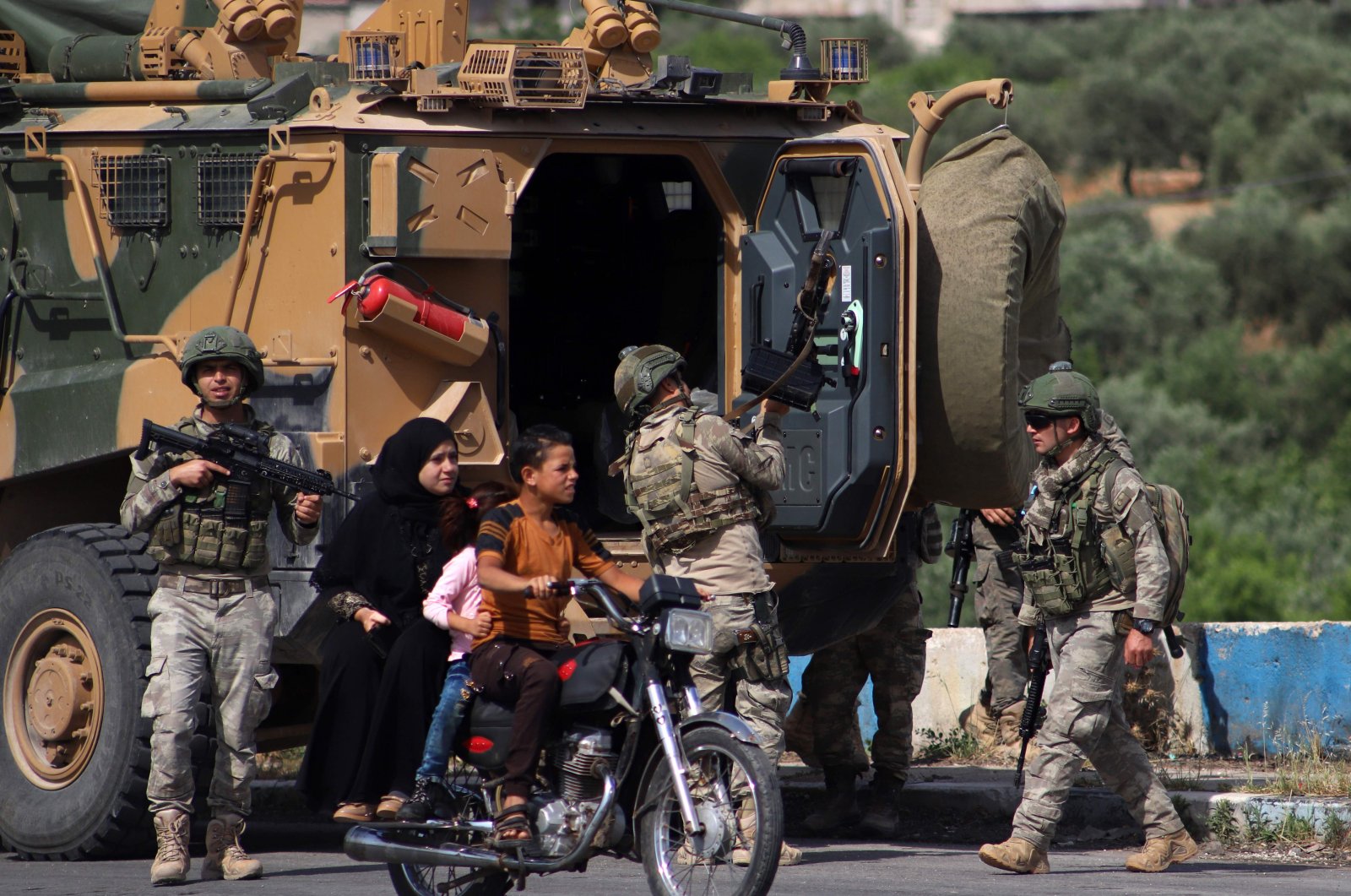 A youth rides a motorcycle carrying a woman and children past a Turkish armoured vehicle part of a joint Turkish-Russian military patrol along the M4 highway in Ariha in the opposition-held northwestern Syrian province of Idlib, June 2, 2020. (AFP Photo)
by Betül Usta Jun 03, 2020 12:53 pm
RECOMMENDED

Ankara plans to coordinate efforts to improve the region’s infrastructure in cooperation with local executives. In order to provide security and law in the region, native units will be trained to protect their own territory. By placing importance on local administrations, participation in the civic decision-making processes will be strengthened. Turkey also aims for the establishment of legal security by empowering local courts to function effectively.

Turkey and Russia agreed to a cease-fire in March to halt the further escalation of violence in Syria’s northwest following the Bashar Assad regime’s assault on the last opposition bastion, Idlib. The incident displaced an unprecedented number of civilians while costing the lives of many. Since the cease-fire, relative calm has prevailed in the region, while Turkey and Russia have been conducting joint patrols along with the critical M4 highway.

In the last few years, President Recep Tayyip Erdoğan and his Russian counterpart Vladimir Putin have worked closely to try to resolve the nine-year conflict, proving that the unique dialogue between the two leaders may overcome the countries' differences in the end. They managed to coordinate their interests by avoiding direct confrontation between their forces in Syria, even though Moscow has been backing the Bashar Assad regime, while Ankara has supported opposition groups.

While many international actors have been fueling the conflict in Syria since the beginning of the civil war in 2011, Turkey, on the other hand, has been trying to de-escalate the violence and enable local people to live in a peaceful and stable environment. As it did in various regions in northern Syria, Turkish officials try to address the lack of infrastructure. In addition to the construction of basic facilities such as hospitals and schools, Turkey’s strategy also includes the improvement of water and electricity supplies to help the region's people access basic humanitarian needs. These efforts are also conducted in coordination with local executives.

In a region that has suffered at the hands of terrorist groups and regime forces for years, the establishment of permanent security is vital. In addition to Turkish soldiers being stationed at designated checkpoints, a security unit consisting of nearly 5,000 locals has been formed. Turkey's military personnel has trained the group and these "military police" are expected to operate near the strategic M4 highway and give support to the Turkish soldiers’ campaign against extremist groups and terrorists in the region.

Idlib has long been under siege by the Assad regime's forces and its allies, and previous cease-fires for the region were plagued by violations. Since April 2018, attacks on the area dramatically intensified, causing new waves of refugees to move toward the Turkish border and putting the country, which already hosts 3.7 million Syrians, into a difficult position. As a result, Turkey, which has the second-largest army in the NATO alliance, has funneled troops and equipment into the region to stop the Syrian regime's advance and to avoid a fresh tide of refugees.

During its three cross-border operations to clear its borders of terror elements, Turkey liberated many areas of northern Syria from the control of radical groups between 2016 and 2019. In these now-protected towns, one of Turkey’s top priorities has been to empower local administrations and involve regional leaders in decision-making processes. Ankara now aims to implement this practice in the Idlib region as well. In order to improve local democracy, the rule of law is a precondition. In line with its policy to provide stability and order in the region, Turkey also aims to contribute to these efforts of empowering local courts.

Idlib is currently home to about 4 million civilians, including hundreds of thousands displaced in recent years by regime forces throughout war-torn Syria, with some likely using the cease-fire as an opportunity to return home. Around 1 million Syrians were displaced from Idlib province when the Assad regime and its allies launched an offensive last November. Most of the refugees sought shelter at camps close to the border with Turkey, while others went to areas under the control of the Syrian opposition.

Still, due to overcrowding and a lack of essential infrastructure in refugee camps, displaced civilians face great difficulty in finding places to take shelter. Thousands of families are in dire need of humanitarian aid as they struggle to live under harsh conditions. Although Turkish officials and charity foundations continue their efforts to provide humanitarian aid, there are still thousands more who need urgent assistance from the international community.