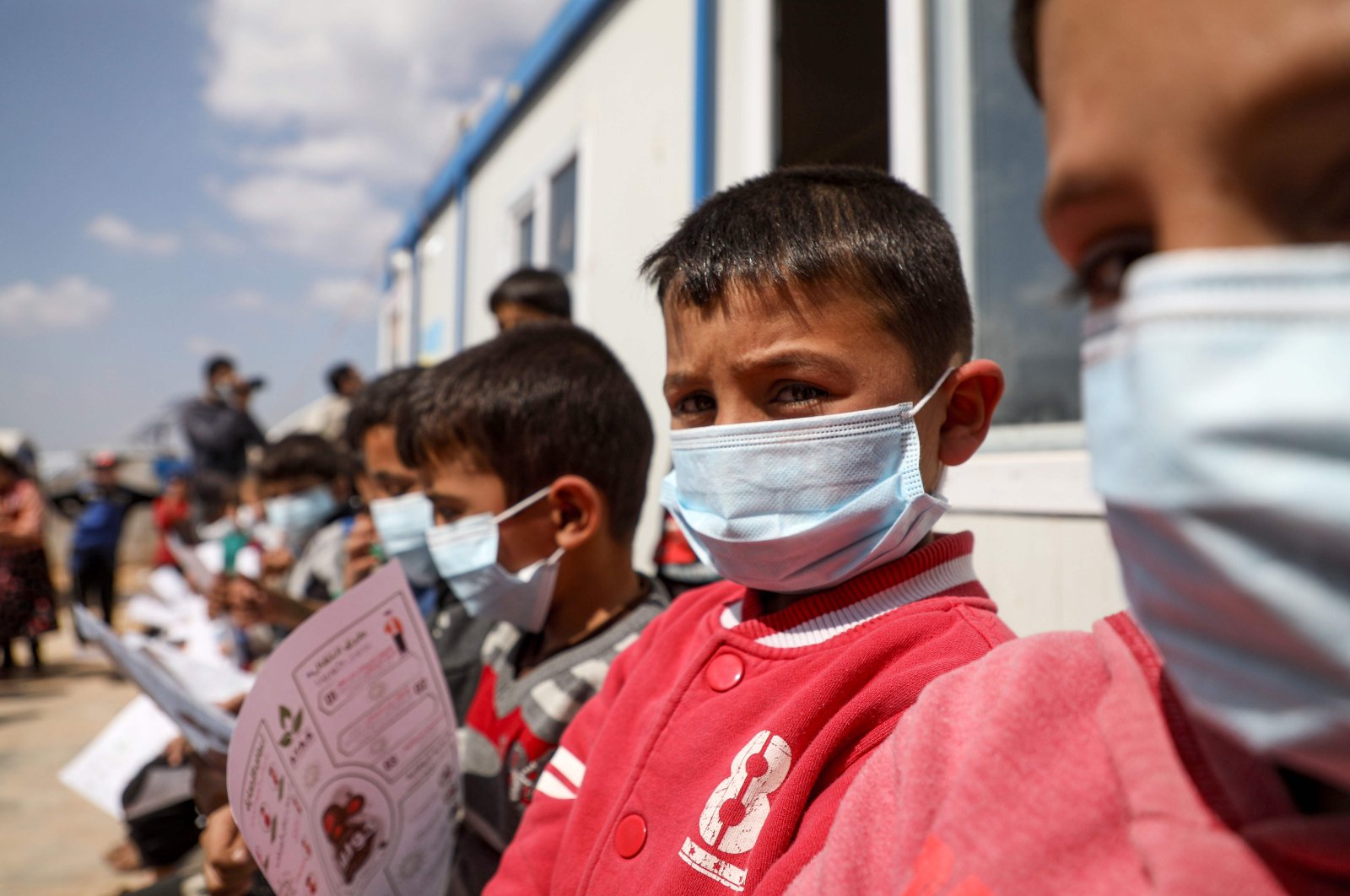 Displaced Syrian children and their parents attend a workshop organised by medical volunteer affiliated with a Turkish-registered Syrian relief organisation aimed at spreading awareness about COVID-19 coronavirus disease and precautions for its prevention, at a camp near the Syrian town of Atme close to the border with Turkey in Idlib province on March 16, 2020. (AFP Photo)
by Anadolu Agency Mar 23, 2020 9:21 am
Edited By Nurbanu Tanrıkulu Kızıl
RECOMMENDED

Çavuşoğlu made the remarks in an op-ed he wrote for the Financial Times titled “EU inaction on Syrian refugees is a stain on human conscience.”

Underlining the European Union's claim to be a world power that stood as a beacon for human rights and international law, he said unless something is done about Greece's treatment of refugees and the support it still receives from the EU that claim will collapse.

"I have long cautioned the EU not to be complacent about the challenges it faces, including the rise of extremism, xenophobia, Islamophobia and anti-Semitism.

"We have called for a revamped international system to manage the huge displacement of people fleeing conflicts such as Syria's. We have painstakingly tried to convince the EU to help us resolve such conflicts and address the fragilities that surround Europe."

Çavuşoğlu associated the situation in Idlib, Syria with Gaza city in Palestine, saying "nine years into the conflict, the province of Idlib has become a ‘new Gaza', where 3.5 million people are sequestered."

He also touched on the Syrian regime's massive military offensive since last May and Turkey's operations in northern Syria.

"When Turkish soldiers were attacked in February, we retaliated forcefully and showed what it means to attack a NATO country," he said, noting that "1 million people had begun marching toward NATO and Europe's southeastern boundary, the Turkish-Syrian border."

He pointed out the cost of Ankara's efforts for the Syrian people in Turkey and in Syria as over $40 billion, saying "we cannot continue to protect the borders of NATO and Europe alone."

Stressing the reasons behind Turkey's decision to open its borders with Greece and Bulgaria to allow refugees to pass into Europe, he said Turkey was never intended as their final destination.

"We cannot force them to stay. Our unheeded calls for the EU to take this wave of migrants seriously, and to comply with the refugee deal it struck with Turkey in 2016, reached the boiling point with the latest Idlib displacement."

He also criticized the EU for not acting against the exaggerated responses of Greek forces against refugees.

"What followed is a disgrace to the EU and a stain on human conscience. The EU and its parliamentarians did little more than watch on as Greek forces sprayed tear gas and fired on people at their border. Greece also suspended refugee applications. The U.N. was critical; the EU not. People died, scores were wounded and European prestige was damaged globally."

He pointed out the EU's failure to "develop a policy that projects peace, prosperity and dignity to its near-abroad" and accused the union of not working "earnestly with Turkey to achieve that."

"Building fortresses does not stop people running for their lives. Solidarity with a wrongdoing EU member, Greece, also cannot trump sound policy," he said, calling the EU to find common ground to address these problems.

"If the EU really is striving to be a geopolitical union, this is how it could be done," he added.

He also considered the EU's demeanor that alienates Turkey, which is the only major European country still aspiring to join the EU, as the biggest policy folly in generations.

"Turkey, the U.K. and the EU must come together to stabilize our common neighborhood, while the EU also expedites Turkey's membership process," he added.