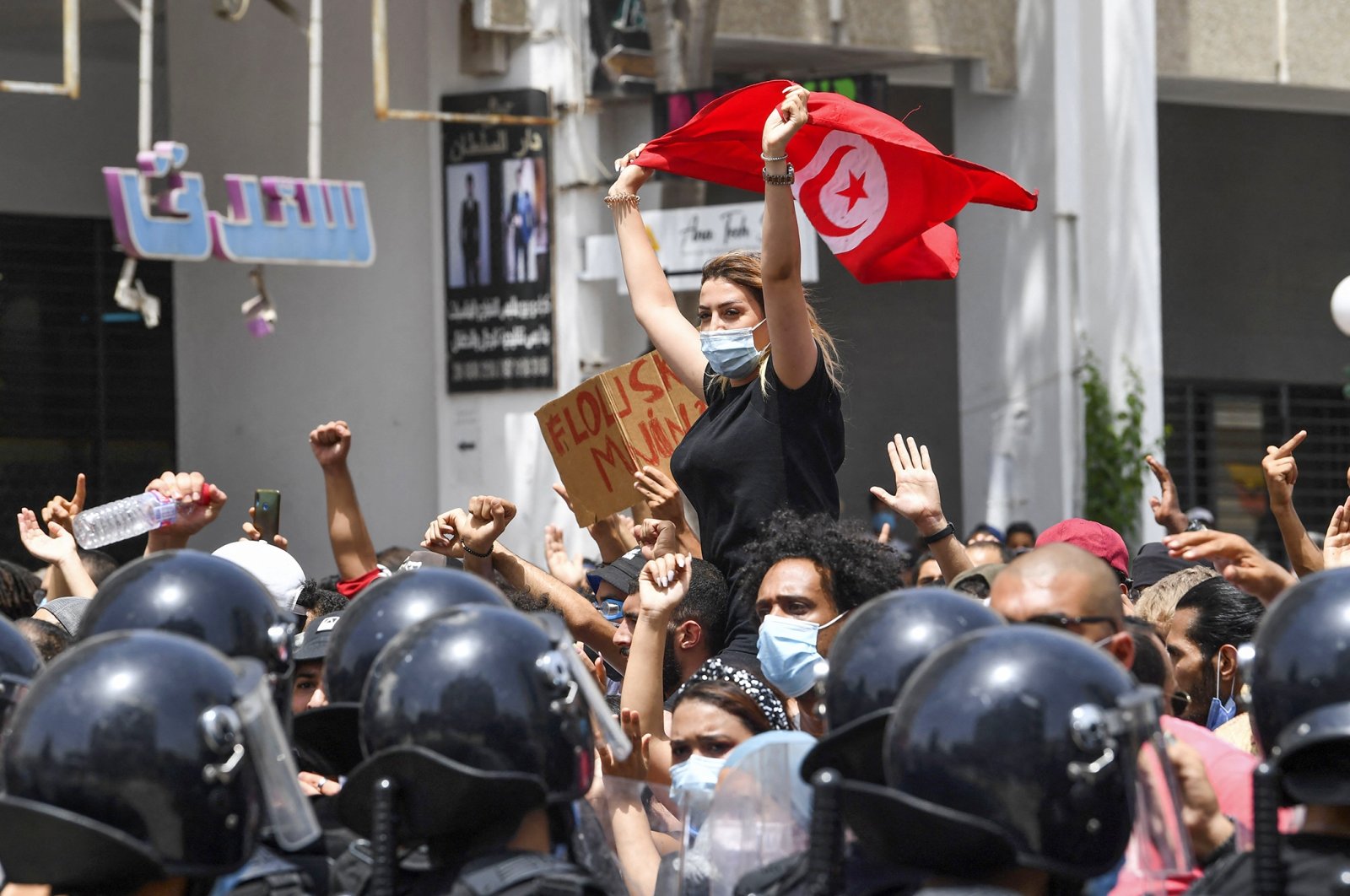 A Tunisian protester lifts a national flag at an anti-government rally as security forces block off the road in front of the Parliament in the capital Tunis on July 25, 2021. (AFP Photo)
by DAILY SABAH Jul 26, 2021 9:05 am
RECOMMENDED

Turkey is "deeply concerned" about the suspension of Tunisia's parliament, which represents the "will of the people," the Turkish Foreign Ministry stated Monday.

“Protecting the democratic gains and the unique position of Tunisia, which is an exemplary success story in terms of the democratic process in line with the expectations of the region’s people, is not only vital for Tunisia, but also for the region,” the ministry said in a written statement.

“Within this scope, we wish that democratic legitimacy is reestablished within the framework of the decrees of the Tunisian constitution as soon as possible.”

It added that Turkey believes the Tunisian people will overcome this challenge and pledged support for the nation.

"Turkey has no doubt that Tunisian people, who have successfully navigated many challenges on path to democracy, will also overcome current test."

The suspending of the chosen parliament in Tunisia and the ousting of the government is a coup against political legitimacy, ruling Justice and Development Party (AK Party) Spokesperson Ömer Çelik stated on the same day.

“This illegitimate initiative by the Tunisian president, has no constitutional basis,” Çelik wrote on Twitter.

“Turkey and Tunisia have strong political, economic, cultural and humanitarian ties that date back to history. Turkey is on the side of the Tunisian people and respects the fight for democracy.”

Parliament Speaker Mustafa Şentop also commented on the developments, saying: “The incidents in Tunisia are worrying; decisions outlawing the chosen parliament and its deputies from doing their duties is a coup against the constitutional system.”

He underlined that military and bureaucratic coups are illegal everywhere, as is the case in Tunisia.

“The Tunisian people will protect their constitutional system and law.”

Tunisia faced its biggest crisis in a decade of democracy on Monday after President Kais Saied ousted the government and froze the activities of parliament, a move his foes labeled a coup that should be opposed on the street.

In a statement late Sunday, Saied invoked the constitution to dismiss Prime Minister Hichem Mechichi and decree a freeze of the parliament for a period of 30 days, saying he would govern alongside a new premier.

The move came after a day of protests against the government and the biggest party in parliament, the moderate Islamist Ennahda, following a spike in COVID-19 cases and growing anger over chronic political dysfunction and economic malaise.

It poses the greatest challenge yet to Tunisia after its 2011 revolution that triggered the "Arab spring" and ousted an autocracy in favor of democratic rule, but which failed to deliver sound governance or prosperity.