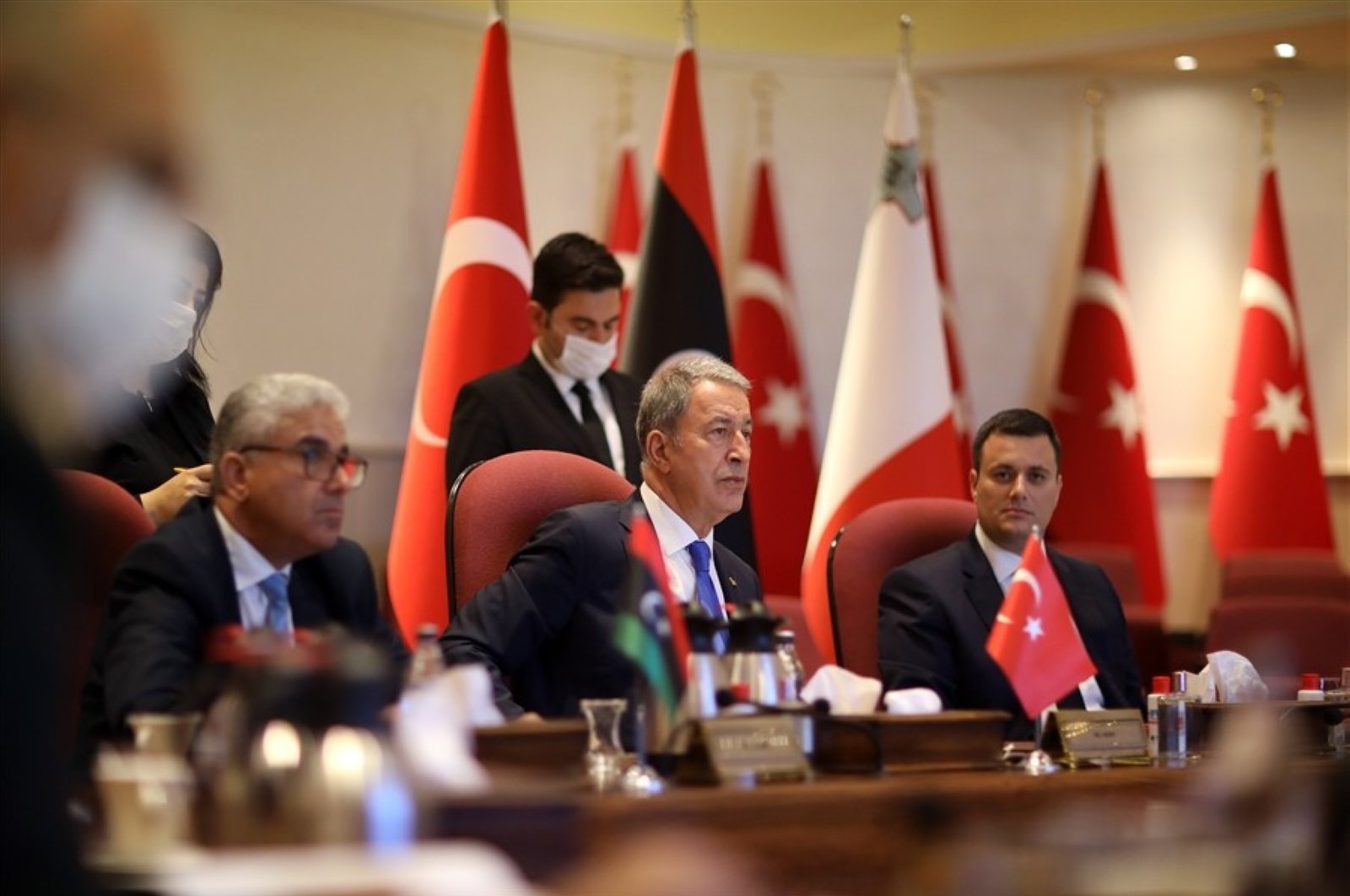 Turkey has a busy week in terms of diplomatic efforts as Libya peace talks at a trilateral meeting in Ankara kick-off and side talks with regional countries such as Algeria continue.

Underlining the increase in Turkey's international responsibilities, Akar stated that thanks to its diplomatic efforts, the country has been receiving positive outcomes from its international initiatives recently.

When it comes to joint works with the Libyan government, the defense minister said that Turkey will continue to operate in Libya, especially in military training, cooperation and consultation.

"We have been continuing our dialogue and joint work with the understanding that 'Libya belongs to Libyans,'" he said, adding that Libyans should know that Turkey will always be there for them.

"Our aim is to provide a living in Libya in peace and security with unity and integrity," Akar underlined, adding that the biggest obstacle to this end is putschist Gen. Khalifa Haftar, which is why other countries should stop backing him.
Later on in the day, Akar discussed the latest developments in Libya with Qatari counterpart Khalid bin Mohammed al-Attiyah and Libyan Interior Minister Fathi Bashagha.

Turkey is the main supporter of Libya's internationally recognized government and is active in urging for a political process in cooperation with regional powers.

Since the ouster of late dictator Moammar Gadhafi in 2011, two seats of power have emerged in the country – Haftar's forces in eastern Libya, supported mainly by Egypt and the United Arab Emirates (UAE), and the Government of National Accord (GNA) in Tripoli, which enjoys U.N. and international recognition.

Bashagha emphasized the damage Haftar has caused the country while taking the lives of thousands.

"This responsibility does not only belong to Haftar but also the countries that support him. These countries should stop supporting a project that is unreal and wrong," he said.

"Supporting Libya's security does not mean only to protect the country itself but also the whole region," he added.

He said supporting Libya's stability is a major step in achieving overall regional stability, including in the Eastern Mediterranean.

"I believe that our work in the Mediterranean would not only be beneficial for us or our region but also the entire world," Akar said.

The maritime pact asserted Turkey's rights in the Eastern Mediterranean in the face of unilateral drilling by the Greek Cypriot administration, clarifying that the Turkish Republic of Northern Cyprus (TRNC) also has rights to the resources in the area. The pact took effect Dec. 8.

As part of the military deal, Turkey has sent advisers to help the Libyan Army defeat Haftar's militias.

President Recep Tayyip Erdoğan said Friday that Turkey would "not allow our Libyan brothers to stand alone," heralding a new deal with the Libyan government, this time with United Nations (U.N.) involvement.

"Our ties with Libya have a long history spanning over 500 years," the president told reporters following Friday prayers in Istanbul.

Underlining that Turkey was determined to enhance ties with the Libyan government, the president said that the move was part of Turkey's responsibilities.

Algeria in talks with Turkey

Meanwhile, the president of Algeria, Abdelmadjid Tebboune, announced on Sunday that the foreign ministers of Algeria and Turkey are communicating daily on Libya.

Speaking at a TV interview, the president also stated that Algeria was getting ready to present a new initiative, in coordination with the U.N., for a solution in the war-torn country. Tebboune claimed that this move might be a solution formed by Tunisia and Algeria. The president further emphasized that Ankara would not support an isolated initiative for peace in Libya; instead, it would urge for cooperation.

When it comes to Egypt's claim of arming the tribes in Libya, Tebboune implied that such a threat would be "very dangerous."

"We would face a new Somalia, which would block any possible solutions for peace," he stated.

Egypt's President Abdel-Fattah el-Sissi met on Thursday with the heads of Libyan tribes in his country's capital Cairo, warning that Egypt would "not stand idle" in the face of increasing military mobilization near the city of Sirte in the north of Libya.

His comments came days after the eastern-based Libyan parliament, aligned with Haftar, voiced tacit support for the possibility of Egyptian military intervention in the country.

As a response to his move, Erdoğan said previously: "Egypt's steps (in Libya), especially standing by putschist Haftar, show that they're involved in an illegal process."

Still, despite criticisms against its actions, Egypt insists on involving itself and the eastern Libyan tribes in the conflict in the war-torn country.

Egypt’s parliament is expected to vote Monday to authorize the president to deploy troops to Libya. Egypt's state-run al-Ahram daily reported on Sunday that the vote in parliament was intended to mandate el-Sissi to “intervene militarily in Libya to help defend the western neighbor against Turkish aggression.”

Egypt claims the strategic city of Sirte as its "red line" and states that it would not hesitate if the Libyan Army advanced toward the western city. Denouncing the Egyptian president's claims, the Libyan Army dispatched several military vehicles to Sirte on Saturday. A large number of military vehicles reached Abugrein as part of Operation Paths to Victory, which was launched to liberate Sirte and Jufra from Haftar's militias, according to army sources.