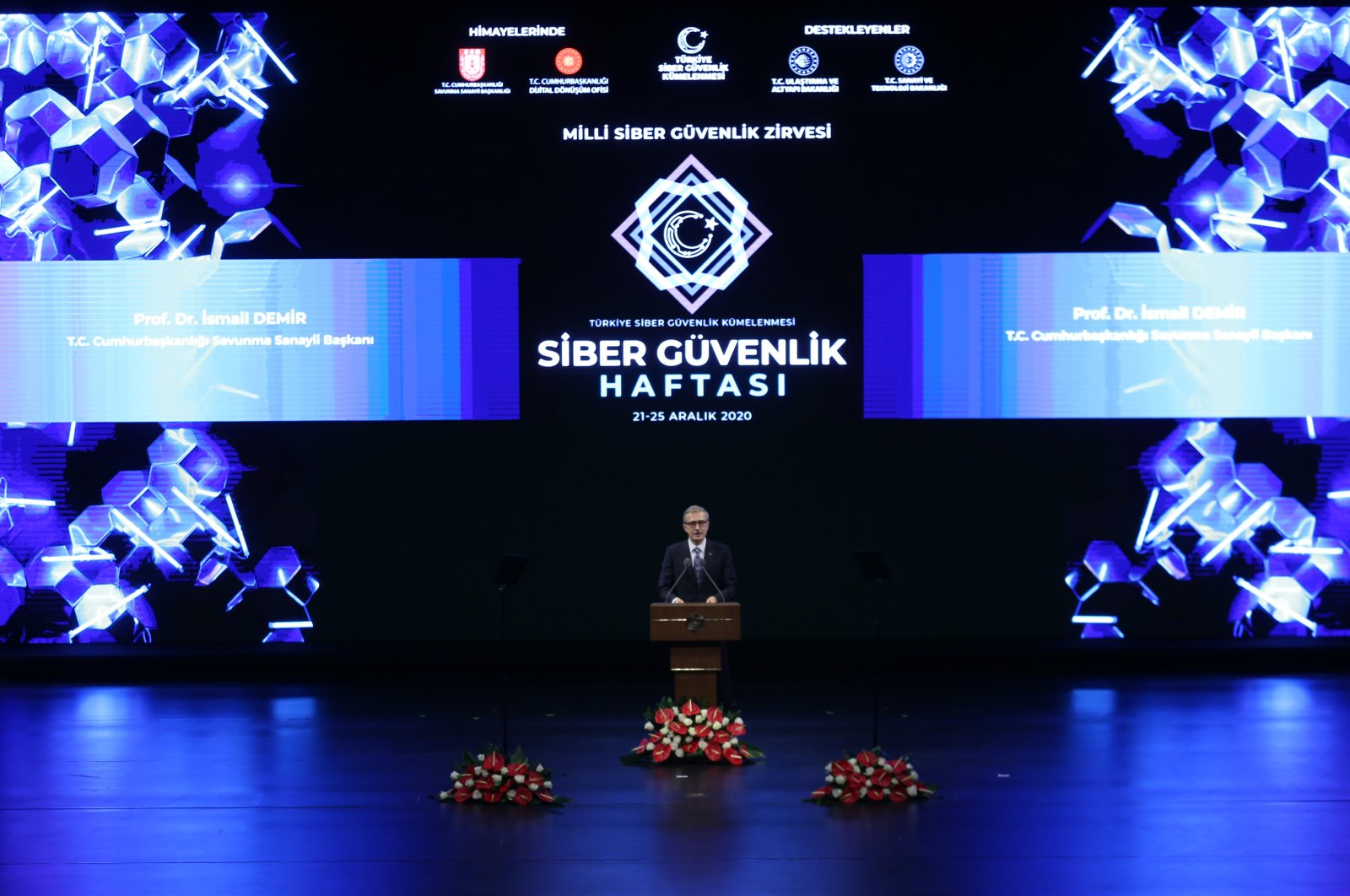 Ismail Demir, the head of the Presidency of Defense Industries (SSB), speaks at an event for Turkey's Cybersecurity Week in the capital Ankara, Dec. 21, 2020. (AA Photo)
by Barış Şimşek Dec 29, 2020 2:14 pm
RECOMMENDED

The notice on the national cybersecurity strategy and action plan was published on Tuesday with the signature of President Recep Tayyip Erdoğan and underlined that information and communications technologies play key roles in countries’ sustainable development, while they can also pose risks related to cybersecurity.

It stated that cyber threats may negatively affect all sectors including communications, transport, energy, banking, finance and health and that, therefore, in the face of increasing threats, measures were accelerated.

Within this scope, the Transport and Infrastructure Ministry has prepared an action plan to cover the years 2020-2023 in coordination with the public and private sectors as well as nongovernmental organizations (NGOs) and universities.

“Information and communications technologies that have become an inseparable part of our life by becoming more widespread and developing by the day offer us many opportunities whereas they also bring together cybersecurity risks,” Erdoğan was quoted as saying in the action plan published by the ministry.

“As in many other fields, we will carry our country further at the international level in the field of cybersecurity as part of our 2023 goals,” he said.

The main goals of the action plan are to protect the cybersecurity of critical infrastructure 24/7, to develop national technological tools for operational needs and to enhance the competencies of teams fighting cyber threats. The plan also envisages increasing awareness of cybersecurity and to invest in human capital interested in the fields.

Turkey inaugurated the National Cybersecurity Intervention Center (USOM) in the capital Ankara in February as part of efforts to boost cybersecurity.

The USOM, a subsidiary of the state-run Information Technologies and Communications Authority (BTK), has been dubbed as an outpost for the country's defense against cyberattacks. With 150 experts on board, the center works with crews in public agencies, companies and private companies against the attacks. It taps into locally made software like Avcı, Azad and Kasırga to stave off threats.

The USOM cooperates with internet service providers and telecom operators, especially against denial-of-service attacks. The center is part of a network set up by the BTK that also includes a data center and an academy to train cybersecurity experts. The center will also employ police and gendarmerie officers to establish easy coordination between different branches of law enforcement.

Turkey has in the past three years averted 325,000 cyberattacks through Avcı, Azad and Kasırga, according to Transport and Infrastructure Minister Adil Karaismailoğlu. According to the minister’s written statement, the Avcı software developed by the BTK allows the command and control center to monitor threats and systems that could be affected by harmful software. Azad, on the other side, detects slave computers through artificial intelligence and Kasırga supervises open resources on the internet. He added that the Global Cybersecurity Index’s (GCI) 2019 report stated that Turkey compared to the previous year jumped 23 rows and became one of the world’s 20 most secure countries in this field.